The prospect of a musical based on Alanis Morissette‘s landmark 1995 album Jagged Little Pill has been in the wind since 2014, when Variety reported that the play was in development with Tom Kitt, of American Idiot and Next to Normal fame, serving as the musical arranger. Now it seems the production is actually coming to fruition, with a complete team behind it, as Entertainment Weekly reports. Renowned Broadway director Diane Paulus (known for her revivals of Pippin and Hair) is directing the production, but the writer of the musical’s book is perhaps the show’s most high-profile collaborator: Diablo Cody, of Juno, Ricki and the Flash and Jennifer’s Body fame.

According to a PR statement, Cody’s story frames Morissette’s well-known alt-pop anthems in the context of a story about “a modern and multi-generational family and their complex dynamics, touching on issues of gender identity and race.” Morissette had this to say about the project:

This team that has come together for this Jagged Little Pill musical is my musical theater dream come true. The chemistry between all of us is crackling and I feel honored to be diving into these songs again, surrounded by all of this searing talent. Diablo and Diane are already taking these deeply personal songs that are part of my soul’s marrow to a whole other level of hope, freedom, and complexity.

Instead of making a Broadway bid right away, the show will premiere at the Harvard-based American Repertory Theater in Cambridge, Massachusetts, where Paulus is Artistic Director, in May 2018. 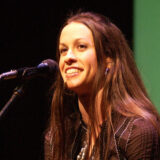 Update (1/28/19): The Jagged Little Pill musical, which premiered with a sold-out run in 2018 at the American Repertory Theater, is slated for a Broadway run starting this year. The New York Times reports that the show will premiere in Manhattan in the fall of 2019, though no exact date or location has yet been announced. One of the show’s producers, Eva Price, told the NYT that the show would be revised for its Broadway premiere: “We were quite happy with the work we did on our original musical, but you can always keep improving, and the changes we have made are many, many little ones that add up to a more streamlined, layered, and deeper show. The world has continued to change, and that has affected the writing and the direction.”