Todd Rundgren is a hero of mine. His records (solo and Utopia!), his songwriting, his production and his musicianship… all played a huge role shaping me into who I am. I still listen to (and study) A Wizard, A True Star and Something / Anything regularly, and I suggest you do, too. Atticus and I sent Todd a wealth of ideas for his new record. He worked on this track and released the “proper” version here: http://amzn.to/2oSyR68. We then took what he did and and moved it forward (or backward, depending on your perspective) into this.
Enjoy-
TR (not Todd Rundgren, the other TR) 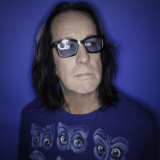