The Verve: Mad for It

The Verve’s ‘Urban Hymns’ originally came out September 29, 1997. In honor of the album turning 20 this year, and our feature on the Best Alternative Rock Songs of 1997 that includes The Verve’s “Bitter Sweet Symphony,” we’ve republished it here.

Richard Ashcroft—renowned in the U.K. as both lead singer of the Verve and the man most likely to relate transmissions from the astral plane—is recounting a recent near-death experience. “A truck nearly hit our cab on the way over here,” he says, sitting in a dusky New York City pub with bandmate Simon Jones. “We were like a second away from dying,” Jones nods grimly, but Ashcroft is, for lack of a better word, psyched. “I don’t ever want to get to the point where I don’t think about death!” he exclaims. “You’ve got to swim in it, learn from it—embrace it!”

Such pronouncements have earned Ashcroft the dubious “Mad Richard” mantle in the British press, and he thinks it fits. “If the way I see the world is mad, then fantastic,” he says. “I love my cracked eyes.” As do many. In England, the Verve’s long-awaited third album, Urban Hymns, sold 250,000 copies in its first week. And as Ashcroft will tell you, Americans should fall in line. “We are not your average band,” he says. “When I sang on this album, I was open to the Source.” Ashcroft refuses to explain what that means, but he evidently tapped into something: Urban Hymns is a model of aching Britpop balladry, swapping the group’s earlier trip wig-outs for four-minute sonic dramas. Just a week before, the Verve opened three shows for Oasis in London’s Earl’s Court, where nearly 18,000 drunk and disorderliness stood in rapt silence as Ashcroft delivered “Bitter Sweet Symphony,” the breathtaking single that may become their “Wonderwall.” Ashcroft points to the shows as proof of the Verve’s imminent ascendancy. “I’ve always said that there are few bands who can fill a space like that,” he says. “We are one of them.”

Growing up in an economically depressed suburb of Liverpool, Ashcroft—who, with his angular features, puffy lips, and chalky complexion, appears to have been genetically engineered for rock stardom—was actually a promising athlete. But something (the Source, perhaps?) told him he’d never make it, so he turned to music. “They called me ‘Mr. Average’ in school,” Ashcroft says dismissively. “But I could sing the Lord’s fuckin’ Prayer when I was five years old. So I knew.” 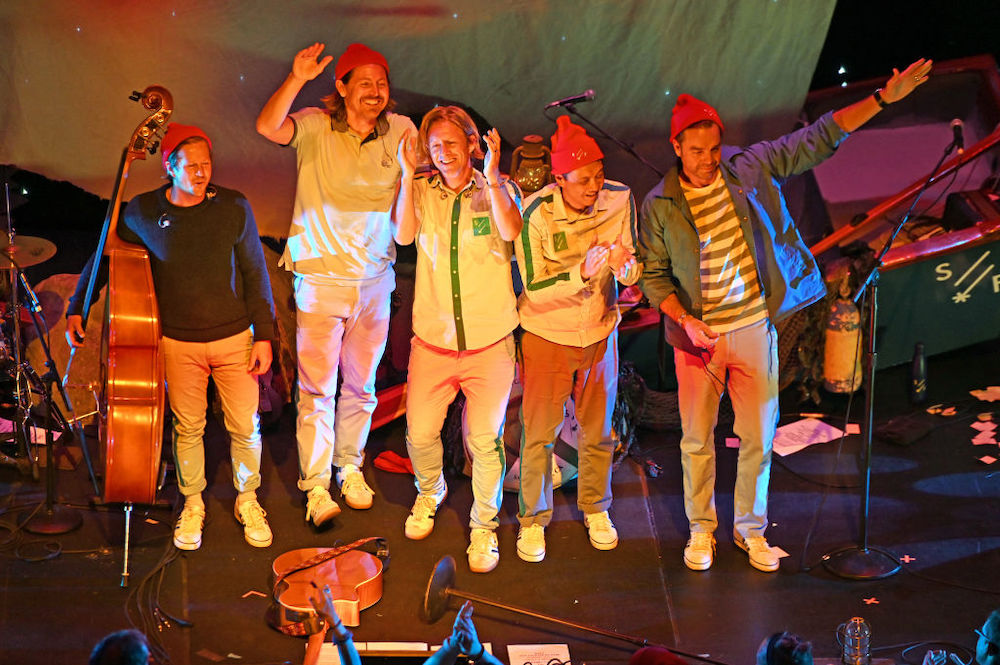 After recruiting Jones, drummer Peter Salisbury, and guitarist Nick McCabe, Ashcroft formed the Verve. The group’s first effort, A Storm in Heaven, came out in 1993, but it was on 1995’s A Northern Soul that the band began to mature sonically. That record was the unlikely product of manic, drug induced sessions marked by incessant infighting between Ashcroft and McCabe. Soon after, Ashcroft, in what the group now admits was a not-so-clever ploy to get rid of McCabe, split up the band. With McCabe gone, he brought in guitarist Simon Tong, and the Verve stagnated. After 18 fruitless months, Ashcroft asked McCabe back.

Still, he harbors few regrets; “Bitter Sweet Symphony” is a product of the rolling torment Ashcroft holds dear. What does irk him is that, because of a songwriting credit screwup, none of the band will ever see proceeds from the single. “We used some bells and a bongo from ‘The Last Time’ by the Rolling Stones—not the riff,” explains Ashcroft. “I was angry,” he says, “’cause no other band could’ve sung [the ‘Bitter Sweet’ line] ‘You’re a slave to the money / Then you die.’ So for [former Stones manager] Allen Klein to take all the money from it…” he shrugs and hoists a Heineken. “It’s a beautiful thing.”

When pressed, Ashcroft will admit that Urban Hymns is lacking—namely, in more of himself. “There’s still a vast part of my psyche that isn’t there,” he says. “‘Cause there’s only 13 songs on it—really, it’d have to be War and Peace before…” He pauses. “I’m not sure what I’m trying to say. But basically, this band knows where it comes from. We’re aware that we’re a vehicle for something that’s far beyond us. Urban Hymns reaching as many people as it is…” Ashcroft takes a long drag off his cigarette and exhales, eyes half-closed in ecstasy. “It’s like docking with the mothership.”