The Mountain Goats – “Rain in Soho” 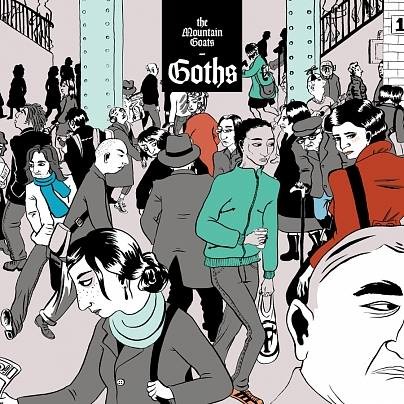 The Mountain Goats’ new album, Goths, is out May 19, and John Darnielle and company have just released their second single from the album–the tom-heavy, Sturm-und-Drang-y “Rain in Soho,” which definitely emulates the music and themes the album title implies, with Darnielle muttering about “castle keep[s]” and “revel[ling] in the darkness like a pair of open graves.”

The song was premiered on NPR, where Darnielle gave an interview discussing his “proto-goth” years: “So when I was 16 I dyed my hair black and I started wearing white Oxfords…What I was favoring was a sort of an undertaker look — a bad undertaker, I guess, because a good undertaker doesn’t remind you of death.”

Darnielle also tweeted some details about the recording of the song, for which the band took to a professional studio and worked with members of the Nashville Symphony Chorus. Darnielle explained that he recorded a more unhinged, doubled vocal track for the song which helps give the track an unhinged quality. Listen below.

I did the new vocal inside the echo chamber at the top of my lungs. it felt like being in a very intense, not entirely good dream

that left the Nashville Symphony Chorus to come in and sing @djperry1973’s arrangement pic.twitter.com/Lno9vHaUMU