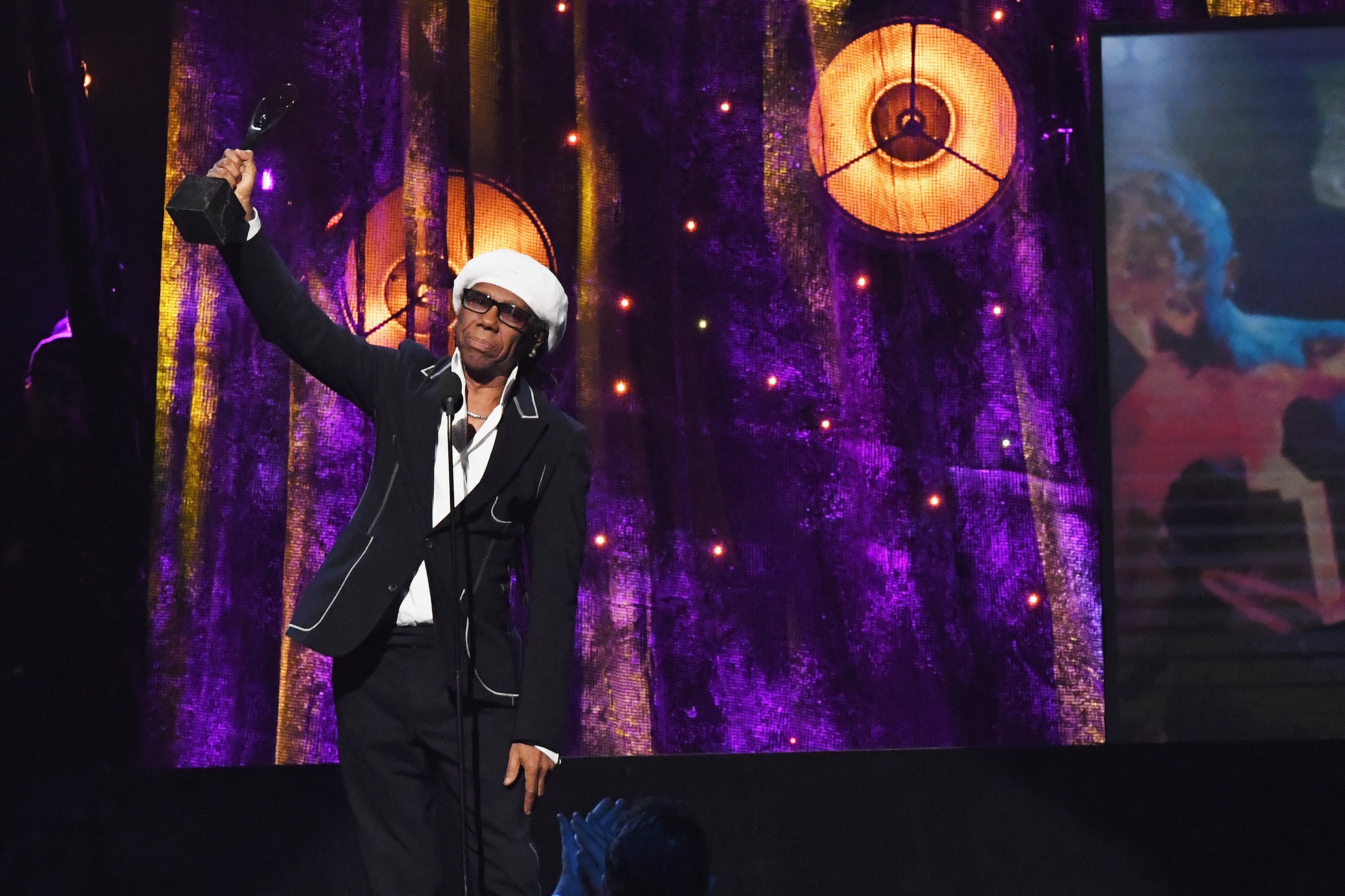 The show will air on HBO on April 29, but we were at the April 7 ceremony to witness everything from a roaring Chuck Berry tribute to a slew of surprise guests paying homage to Tupac to Eddie Vedder shouting out Chance the Rapper.

Here are 11 unforgettable moments from the 2017 Rock and Roll Hall of Fame induction ceremony.

Considering Chuck Berry is the single most important figure in rock history, it makes sense that the first Rock Hall ceremony following his death would open with an homage to the rock n’ roll architect. ELO took the charge, delivering their cheeky cover of “Roll Over Beethoven.” Opening with the strings of Beethoven’s Symphony No. 5, the band quickly kicked their classical leanings to the side for a ripping run-through of the sneering rock classic.

Dhani Harrison — whose late father George was a close friend and bandmate of Jeff Lynne’s — gave the induction speech for Electric Light Orchestra. Harrison shared the story of attending an ELO concert at age 7 where his father unexpectedly joined the band onstage. “Out of nowhere they all kicked into ‘Johnny B. Goode’ like Back To the Future,” he recalled. While the idea of George Harrison performing with Jeff Lynne might not seem like a surprise, what happened next was: the big screen behind Dhani miraculously cut to Michael J. Fox sitting in the audience. The Barclays Center went insane, clapping and hooting with as much fervor as they gave to the inductees as Fox waved and politely tried to ignore the attention. Hey, it’s deserved: Marty basically invented rock n’ roll.

Joan Baez was the sharpest of the Rock Hall inductees, singing about deportees and talking social activism as well as joking about her age and the likelihood that a good portion of the Barclays Center — mainly there for Pearl Jam and Journey by the sound of applause each band received — didn’t know who she was. “I’m aware I’m speaking to many young people who, without this Rock and Roll Hall of Fame, would have no clue who I am. My granddaughter had no idea who I was until I took her backstage to a Taylor Swift concert,” she quipped. Prior to bringing Indigo Girls and Mary Chapin Carpenter out for two gorgeously harmonized performances, Baez did “Swing Low, Sweet Chariot” solo, and offered a generous shout-out to the night’s implicit villain: “I saw a band of angels, and they were coming to carry you, me, us, even Donald, home.”

After Geddy Lee helped “right a wrong” by inducting Yes into the Rock and Roll Hall of Fame, the Rush bassist joined his prog-rock heroes onstage for a crushingly loud run-through of “Roundabout.” Speaking to Billboard backstage about it, Lee said, “I just wanted to make sure I didn’t fuck it up. They are without question my favorite band.” He did, however, point out it was “bittersweet” to take over for late Yes bassist Chris Squire, who passed away in 2015 and didn’t live to see his band recognized. He did Squire justice, though: Lee and Yes (with Jon Anderson back on vocals for the first time since 2004) rocked with more precision than any other performer that night.

As the 2017 Rock and Roll Hall of Fame induction ceremony kicked off, the big question was “who will perform the tribute to the late Tupac?” Well, the Rock Hall made a lovely, inspired choice by having East Coast R&B balladeer Alicia Keys honor the late West Coast rap god with a medley of snippets of ‘Pac songs (including “I Ain’t Mad at Cha” and “Ambitionz As a Ridah”) while effortlessly riffing on the piano, talking about her love for the man and his music. Standing up from the ivories, she belted “Changes” as the audience sang-along. Then, things got loud. Snoop Dogg and YG performed “2 of Amerikaz Most Wanted,” Treach from Naughty by Nature did “Hail Mary,” and T.I. – decked out in Tupac’s signature bowtie bandanna AND a leather corset — gave an affecting cover of “Keep Ya Head Up” that was clearly very meaningful for him.

Even though Journey’s classic vocalist Steve Perry didn’t reunite with the band during their Rock Hall performance (to the dismay of hopeful fans), he did offer up a touching speech, giving props to the R&B band he played in during high school, former bandmate Neal Schon’s magic fingers, his lawyer and more. And obviously, when “Don’t Stop Believin'” started, the Barclays Center lost it.

Pharrell was glowing with pride while introducing Nile Rodgers during the Rock Hall ceremony, but Rodgers — ever the self-effacing Genius Behind the Curtains — was gracious and direct during his acceptance speech, even choking up at one point. He explained how after finishing an album with an artist, their name is on the LP in big letters while his is in teeny-tiny letters. “My name doesn’t mean shit. This award is amazing to me because of all the people who have allowed me to join their lives and their bands.”

Prince died not long after the 2016 Rock Hall ceremony, so this year’s edition featured Lenny Kravitz and a full gospel choir performing a swamp-funk take on “When Doves Cry” in tribute. Covering Prince is a difficult proposition, and his take on the Purple Rain classic didn’t entirely land. What came next, however, was remarkable: A cover of the Sign O’ the Times classic “The Cross” that allowed Kravtiz, the singers and his backing band ample time to build the slow-burning rocker to an incendiary climax. For covering Prince, notching one whiff and a homerun is a pretty impressive score.

Considering the Rock and Roll Hall of Fame attracts a fair share of industry attention, it was pretty hilarious that David Letterman — who introduced Pearl Jam after Neil Young bowed out due to illness — roasted Ticketmaster, who Pearl Jam famously accused of charging too much for tickets during the mid ’90s. Letterman’s take on that part of rock history: “Pearl Jam stood up to that beady-eyed, bloodsucking corporation Ticketmaster… And I’m happy to say, because they stood up to them, every concert ticket in America today is free.”

Prior to absolutely destroying the stage with Pearl Jam (who brought back Tendrummer Dave Krusen for his first PJ appearance in 25 years), the perpetually woke Eddie Vedder made a plea for people not to close their eyes and pretend we’re not facing an impending hellscape of a planet within the next century. “Here we are in this modern technology age, and we’ve got a lot of evolving to do. Climate change is real — this is not fake news,” he said. “We cannot be the generation history looks back on and thinks ‘why did they not do everything humanly possible to solve this biggest of problems?’ Anything can be attainable — the Chicago Cubs winning the World Series. I use that analogy because it can be done, but we don’t have 108 years.”Vedder also paid tribute to Chance the Rapper for “all the work you’re doing in Chicago” and said, “If you’re somehow watching, my daughter Olivia loves you.”

As per Rock Hall tradition, an assortment of Class of 2017 inductees — members of Pearl Jam, Journey, Yes and 2013 inductee Geddy Lee of Rush — closed the night with an all-star jam session. Instead of performing one of their songs, however, they covered Neil Young’s iconic “Rockin’ in the Free World,” a searing political anthem that feels as relevant now as ever. As the guitarists plowed away on the finale, a sweaty Eddie did a well-deserved victory lap around the stage and the night came to a close.