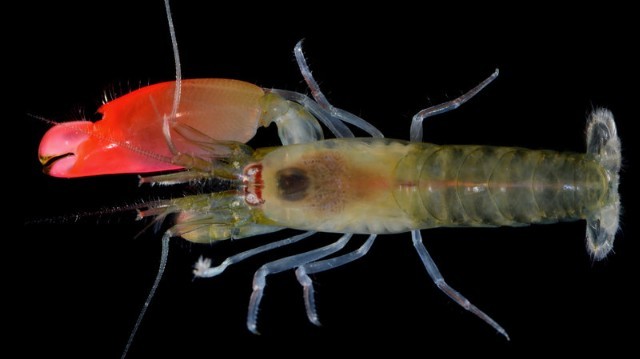 Although “Shrimp” wasn’t the title of a song off Pink Floyd’s career-best concept album Animals, “Pink Floyd” is now the name of a newly discovered species of pistol shrimp. The now christened synalpheus pinkfloydi is actually the second crustacean Sammy De Grave of the Oxford University Museum Of National History has named after a rock ‘n’ roll artist, the first being the elephantis jaggerai in honor of the Rolling Stones frontman. As Grave explained in an interview with BBC, “We are all Pink Floyd fans, and we always said if we would find a pink one, a new species of pink shrimp, we would name it after Pink Floyd.”

This new invertebrate is a fitting recipient for the Pink Floyd-inspired name, as it wields a large pink claw that it can use to generate sonic energy reaching up to 210 decibels (very loud, as in more deafening than a Scottish school teacher screaming about pudding loud). Even still, the synalpheus pinkfloydi doesn’t hold a candle when compared to the world’s coolest crustacean: the mantis shrimp. Check out that bad-boy’s claw powers below: