Michelle Branch Is Finally the Artist She Always Wanted to Be

At one time, things happened quickly for Michelle Branch. She moved to Los Angeles and signed to Warner Bros. when she was 16. Her debut album, The Spirit Room, came out when she was 18. Almost immediately, she had massive radio hits: “Everywhere,” “All You Wanted,” “Goodbye to You.” She won a Grammy for “The Game of Love,” her song with the legendary Santana. She married her bassist, Teddy Landau, and released her second album, Hotel Paper, a week before she turned 20 years old. She had a daughter, and detoured into country music, forming a duo called the Wreckers with Jessica Harp.

And then, she got stuck. Branch is now 33 years old, and nearly fourteen years have passed since she released a solo album. “I started to kind of just make peace with the fact that maybe it wouldn’t happen again,” she tells me as we talk inside a closet-sized dressing room at New York City’s Webster Hall. Tonight, Branch will play an album release show for her new record, Hopeless Romantic. The concert sold out weeks ago, and earlier this afternoon, a well-wisher delivered a framed and autographed copy of Neil Young’s Harvest, delighting Branch.

If the interest in Branch’s new music seems obvious tonight, what delayed her during that long activity gap will surprise no one familiar with the music industry. A succession of Warner Bros. CEOs signed off on her projects, then changed their minds or left their jobs. In 2010, she made an album called Everything Comes and Goes, but had to settle for releasing it as a six-song EP and a handful of free downloads. The single, “Sooner or Later,” peaked at #93.

Seeking a new strategy, the label bounced Branch between potential collaborators, none of whom fit the vision she had for herself. In late 2013, she was heading back to California following another unfulfilling creative rendezvous, and realized she didn’t want to go home. “My marriage [was] on shakier ground than I acknowledged,” she says. “We have a beautiful daughter together, and we were trying to stay together for her, and it just got to a point where we were both like, ‘We’re so unhappy, what are we doing?’” 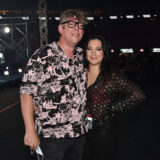 After splitting with Landau in January 2014, Branch started working on songs for what would become Hopeless Romantic. Branch is a longtime Jenny Lewis fan, ever since her days with Rilo Kiley, and she found inspiration in Lewis’ then-new album The Voyager. “I was like, wait a minute, she’s on Warner Bros., and she just made a record that sounds like the record I wanna make,” Branch says. “But I’m being told by the same people that I can’t make a record that sounds like this. For some reason, no one could wrap their head around me making anything other than a teen pop album.”

With no solo hits since 2003, Branch was hard-pressed to convince the label she wasn’t the same musician she’d been at 19. Trying to be cooperative wasn’t helping. “I’m a very polite person, and I would never confront people in those situations where I’d be [feeling] like, ’Fuck you, this isn’t fair!’” she says. “I would say that behind their backs, but in those situations, I’d be like, ‘Okay, what can I try?’ Whereas Patrick, and a lot of men I know, in that position would be like, ‘Fuck you, you’re wrong.’”

Patrick is Black Keys drummer Patrick Carney, whom Branch met at a party at the beginning of 2015. She was finally a free woman: Warner Bros. had dropped her less than six months after her divorce. When she re-signed to the smaller Verve Records in the summer of 2015, she asked Carney to help produce new material. They had a budget to record four songs, but the results didn’t satisfy Branch’s new managers at Verve. Frustrated, Carney told Branch he’d cover all the recording out of pocket. “If, at the end of the day, we turn this album in, and they don’t like it, then you’ll probably get dropped,” he told her. “And you’ll own the record, ‘cause I’m gonna pay for it.”

They weren’t yet romantically involved. That happened later, maybe the way Branch describes it on a rapturous, honey-sweet song called “Carry Me Home”: “I’ve been sitting second-guessing all alone … You’ve been standing right in front of me all along.” By the time the album was finished in May 2016, Branch and Carney were dating, and Verve had changed executives. The new bosses gave her the green light.

“My confidence was pretty non-existent when I started this record, and Patrick really helped me find myself again,” Branch says. Carney plays drums in her live band—a happy accident, as Branch didn’t even intend on asking him to tour. “I feel like this is just as much his record as it is mine. I think last night at midnight when [the record came out], he breathed just as much of a sigh of relief as I did.”

In January, Branch played a secret NYC preview show backed by Carney and three of his friends: bassist Jake Blanton, and Tennis’ Alaina Moore and Patrick Riley. Moore was exuberant over meeting—and working with—an artist she calls her teenage idol, even though they’re just two years apart in age. “When I first got my guitar, I taught myself how to play ‘Everywhere,’ ‘Breathe,’ all of her hits,” Moore says, calling from the road on tour with Tennis. “This record doesn’t sound anything like what you think of when you think ‘Michelle Branch.’ [Working with Patrick] was an amazing choice. It definitely sounds like an endeavor of love, because of their personal connection.”

Hopeless Romantic is about love, but it’s not a linear story. There are songs about the failed marriage and the new relationship, and it’s not always apparent which is which. One moment, Branch is blissfully falling; the next, she’s cruelly heartbroken. She crawls on hands and knees. She gets up and runs away. She drinks to forget her ex, and to bed her new lover. (The new Michelle Branch sings about sex sometimes, but never anything you couldn’t play around kids.) She writes like someone who knows she’s made mistakes in love, but she doesn’t waste time blaming herself.

At the heart of Hopeless Romantic is the title track. There’s nothing like it in Branch’s catalog—it’s barbiturate woozy, a true torch song. ”’Cause I’m a hopeless romantic / When I should run for my life,” she moans. “I know you’re gonna eat me alive.” She tries to talk sense into herself, then doubles back: “When will I ever learn? / But wait, I never listen.”

If the new album doesn’t sound like the old Michelle Branch, it’s partly because she’s almost abandoned the acoustic guitar that factored heavily into her early music. During her “dry spell,” as she calls it, Branch didn’t have a band. “I would get asked randomly to do a gig here and there, and it was always like, ‘Well, she doesn’t have a band right now, so she’ll go play acoustic,’” she says. “I’m so tired of playing these singer-songwriter shows with my acoustic guitar. I don’t want any of that referenced on the record, ’cause I don’t want it to feel that way.”

Making Hopeless Romantic changed Branch’s approach to singing, too. On The Spirit Room and Hotel Paper, she was constantly reaching for the top of her range. “Patrick was like, ‘I’ve listened to your past stuff, and you’re always like, belting. Was that a choice?'” she says. “And I was like, ‘Well, I don’t know, no one’s ever really asked me!’” Previously, she’d only made records with John Shanks, a modern rock producer who left his fingerprints all over the guitar-driven pop that dominated early ’00s radio, producing for artists like Kelly Clarkson, Hilary Duff, and Ashlee Simpson. Shanks didn’t want Branch singing in falsetto, instead prodding her to sound more insistent.

“I had never made a record before working with John, and that was my experience,” she says. “[Patrick] was like, ‘I want it to be conversational. You don’t have to sing so hard. Step back.’ And the minute he said that, a light bulb went on for me.”

Now, when Branch plays her old hits live, her voice is lower and more modulated. With a full band and new arrangements, she sounds like she came from an entirely different part of the 2003 radio landscape. A slower, muddier “All You Wanted” sounds like a lost midtempo alt-rock classic, while “Are You Happy Now?” reveals its secret post-grunge angst. It’s easy to wonder what Branch’s old records might’ve sounded like if she’d been able to control more creative decisions as a teenager.

There is some acoustic guitar on Hopeless Romantic, but the new unifying sounds are bass and synths, which hit right off the top of the swaggering, sexually confident opener, “Best You Ever”: “I want you / To remember me / Every time you scream / As the best you ev-er.” On “Temporary Feeling,” Branch sneaks in a tart little “na-na-na-na-na,” her vocals echoed by pinprick keyboards farther back in the mix. You could imagine Kylie Minogue cutting the same record. On stage that night, Branch introduces it as “the closest I’ll ever get to writing a disco song.”

None of which is to say that Branch can’t still make a pop smash. Her breakup celebration, “Not a Love Song,” comes midway through the second half. It’s the closest she gets to taking direct shots at her ex-husband. “You’re not even good enough for a love song,” the massive, bouncy chorus goes, “You’re just somebody that I wasted my youth on.” In a different cultural moment, one imagines this would’ve been her next Top 40 hit—an “Are You Happy Now?” with ten-plus years of emotional weight behind it.

During her years in record-label limbo, Branch recorded an album called West Coast Time. I haven’t heard it, because it was never released. You understand why the title would’ve worked, though, because the songs on Hopeless Romantic are bright, but hazy. There’s always one last final chorus. The whole album might be a song or two longer than it needs to be. After so many years of silence, it would be hard to blame anyone for squeezing in a few extra minutes.

Putting out a new album feels different this time, and not just because Branch isn’t 19 anymore. “In 2003, I was surrounded by people who put immense pressure on me for [Hotel Paper] to be successful,” she says. “I felt this impending doom of, ‘If this doesn’t do as well as my first record, or if this doesn’t live up to expectations, that’s it.’ Now, I’m just grateful for the chance to have an album out.”

Enough time has passed that Branch’s daughter, Owen, is now 11. What if, in a few years, she wants to go into the music industry herself?

At this question, Branch cringes so forcefully she busts out laughing. “Thank God, I don’t think that’s a reality for her,” she says. Owen wants to be a paleontologist. “But honestly, if I had a teenage daughter who wanted to sign a record deal, I don’t know if I’d let her.”