Magic! and D.R.A.M. Text About Getting Conned by Groupies in “Girl at Coachella” Video 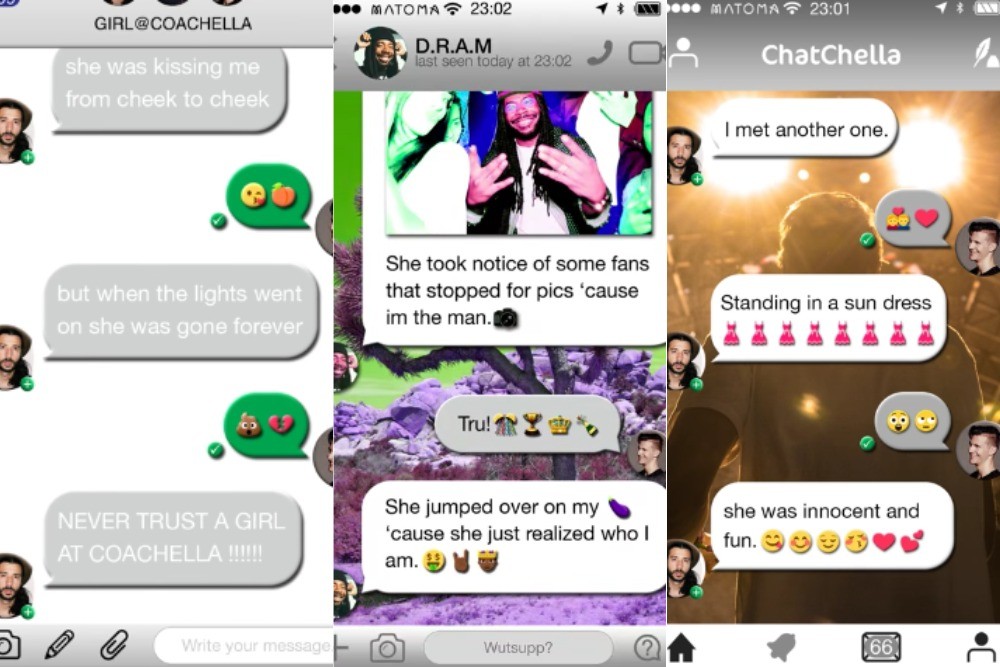 Coachella begins tonight, triggering the spread of thousands of flower-crowned, molly-dusted teens across the California desert. To mark the occasion, Matoma, Magic!, and D.R.A.M. have released a lyric video for “Girl at Coachella,” a song that came out last month.

The conceit of the lyric video is pretty basic: Magic! singer Nasri and D.R.A.M. take turns texting their interactions with the titular Coachella girl with Matoma, who replies with a stream of emojis. I guess that, before now, I’d never considered how they’re both singing as themselves—famous musicians who meet girls wanting to go backstage with them—instead of as star-crossed attendees who might find each other in the Radiohead crowd.

The latter concept might’ve been almost charming, but self-aggrandizing lines like Nasri’s “She said she’d run away with me / So I took her to the VIP” and D.R.A.M.’s “She jumped over on my dick / ‘Cause she just realized who I am” are… intensely wack. Moreso when you imagine this cabal of artists group texting about getting conned out of sexytime by a bunch of apparently dick-riding fans. In a press release, Matoma painted the song as fictional, saying it’s “about a girl who teases with a guy’s feelings at heart at the festival.” Whatever, man.

Kiesza, the Weeknd, and Magic! Win Big at the 2015 Juno Awards

The Winners and Losers of the Summer of Ass