Review: On DAMN., Kendrick Lamar Is Not Your Prophet

The salvation of the New Testament is preceded by the judicious wrath of the Old—the stories of genocidal floods, generational curses, violent plagues, and God’s righteous judgment. Kendrick Lamar has never shied away from fire and brimstone, but he’s now particularly fixated. On his new album DAMN., he agonizes over losing his fortunes like a modern-day Job, and declares himself an Israelite, doomed to wander the earth. “We are a cursed people,” his cousin, Carl, intones before the album’s centerpiece “FEAR.,” citing the Old Testament’s Book of  Deuteronomy. It’s a foreboding subtext, but the pieces have fallen together. When Kendrick proclaimed on “The Heart Part 4” that something was coming on April 7, many expected a new album. Shortly before midnight, the country found out Donald Trump had ordered an airstrike on Syria, tempting a world war.

To Pimp a Butterfly, Kendrick’s prior opus, was praised as The Album We Needed after visual evidence of anti-black violence became ubiquitous on our televisions and Twitter feeds. But Kendrick’s body and blood were washcloths to absolve too many listeners of American sin, regardless of how many admitted it. Two years later, his altruism and dedication to blindfolded communal uplift have thinned. “I tried to lift the black artists,” he raps on “ELEMENT.,” “but it’s a difference between black artists and wack artists.” Later on “XXX.,” a father of a recently slain son asks Kendrick for spiritual guidance only to hear him rebuke Christianity for violence: “Ain’t no Black power when your baby killed by a coward.” Even Bono appears on the hook as a tortured apparition—his yuppie humanitarianism has no place here.

So when Kendrick properly returned not with a message of self love, but with Mike WiLL Made-It’s demented piano stabs on “HUMBLE.,” the knee-jerk assumption was that he’d reined in his ambition. Farewell synthesized decades of black art; hello bangers. But this is a harsher Kendrick, one who’s still searching for God through dimmed light. TPAB gestured toward some everlasting truth, but on DAMN., Kendrick is no longer playing a conflicted savior, because the River Jordan is far even for him. End times are here and bodily pain doesn’t promise spiritual rewards; not everybody gets to be Job. “What happens on Earth stays on Earth,” Kid Capri announces to introduce “ELEMENT.” On DAMN., it’s a deeply resonating revelation.

DAMN. is a severe sonic shift from TPAB, where the collaborative powers of jazz were a guiding principle.  Live instrumentation is swapped for fanged 808s and traditional beatmaking, the latter provided most notably by veteran producers 9th Wonder and the Alchemist. On “LUST.”—which features lusciously backmasked production from DJ Dahi, Sounwave, and admirers-turned-collaborators BADBADNOTGOOD—Kendrick vividly describes a desired tryst before recalling the bitterness of Trump’s election. Trump “made us feel cheap,” yet even as Kendrick applauds people for protesting, he knows passive acceptance might quickly become the new norm: “Things change / Reverting back to our daily programs, stuck in our ways.” The man who once chanted “we gon’ be alright” is no liberator; he’s a citizen making sense of a corrupt construct that doesn’t change just because his songs empowered people marching in the streets. 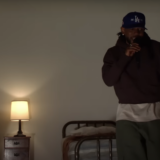 That malaise works itself into the twangy “PRIDE.,” where he deadpans that he can’t fake humility just “’cause your ass is insecure.” When “HUMBLE.” interrupts the rumination right after, the greatest-rapper-of-all-time boasts feel like protective armor. A majority of the set works well within this theme, including probable radio hit “LOYALTY.,” which features Kendrick and Rihanna interlocking verses, sounding confident but commiserative. (Kendrick’s sing-song works in controlled dosages, though; the balladry of “LOVE.” is out-of-place in its wistfulness, and “GOD.” is penultimate filler.)

Kendrick is at his best when he’s rapping through the abyss, and better when his flow pulls in rappers from times past. On “ELEMENT.,” he catapults through Kid Capri’s brooding, copping Juvenile’s “Ha” flow and working in a 2Pac conspiracy reference. The borderline absurd pussy-praising on “LUST.”—which features a return of the Kendrick falsetto—sounds like a splinter sect of Lil Wayne’s horny/dada philosophy. Contemporary allusions like these are reminders that if he’s the prophesied Voice of the Generation, then his forebears can’t be removed from the narrative.

Album closer “DUCKWORTH.” is an exceptional entry into the African-American tradition of storytelling, where Kendrick recounts how Top Dawg Entertainment founder Anthony Tiffith’s decision not to murder Kendrick’s father during a fast food robbery had culture-shifting consequences. Pull past the triumphant a-ha moment, and Kendrick’s writerly details reveal a bleaker picture: “Top Dawg could be servin’ life / While I grew up without a father and die in a gunfight.” The story is a whim that happened to become a miracle; the obverse, death and incarceration, is the norm.

But because DAMN. mainly concerns itself with the existential ramifications of being part of a persecuted lineage, these highlights are supplemental to the album’s two most powerful moments. “FEAR.” finds our star on his knees as a forsaken acolyte. ”Why God, why God do I gotta suffer?” he pleads in reversed vocals. The Alchemist-produced guitar riff, which popped up as a melodic aside on “The Heart Part 4,” loops as a soft cry, a temporary salve for black men who’re never granted salvation. Kendrick examines this darkness in three acts: from the perspective of pridefully abusive guardian threatening a 7-year-old; a despondent 17-year-old shadowed by death (“I’ll prolly die anonymous / I’ll prolly die with promises”); and a 27-year-old aware of the transitory nature of his success. Kendrick’s characters, more often than not, are fully formed illustrations, who you can imagine out of the song. There’s a felt despair when teenage Kendrick rails off his list of real dangers in a stream-of-conscious deadpan, because the voice of a lost black child looking for spiritual light where streetlights outline danger feels too familiar.

The flip of this agonizing is “DNA.,” one of his greatest songs. Mike WiLL turns the aquatic textures of “Black Beatles” into a biblical war cry as Kendrick responds in kind, proclaiming his heritage to be that of kings and rulers. The three minutes play out as his final testament—never mind that it’s DAMN’s first full track. Halfway through, he pivots for a subversive take on Du Bois’ double consciousness, wildly staring at the nation’s accusatory lens: “Sex money murder, our DNA!” Kendrick isn’t sarcastic but emboldened, breaking men over violently flattened bass. Here, racism isn’t inhumane; it’s blasphemous. And, even though it’s bookended by another vision of destruction, it’s here you’re reminded of the best modern black music: hoodoo that moves the body. The ever after is secondary to the present thrill of feeling alive.