Here’s Everything We Know About Harry Styles’ Debut Album [UPDATED]

Harry Styles’ upcoming debut solo album is poised to be one of the towering commercial achievements of 2017. His lead single “Sign of the Times” has already edged his friend and collaborator Ed Sheeran‘s “Shape of You” out of the #1 spot on the singles charts in the UK, and shot into the top 5 in America. With its shades of early-’70s David Bowie and The Walkmen if they had been primed for The X Factor, the actually-pretty-good “Sign of the Times” also separates Styles from his ex-One Direction bandmates, who stepped out with mediocre singles leaning on R&B, folk, and EDM.

Before Styles releases his rock-heavy debut, here’s a roundup of everything we think we know about the album.

The 10-song album is coming in just a couple weeks

Harry Styles will be released on on Styles’ own label, Erskine Records, on May 12. Here’s the track list, which spans a brisk 10 songs. 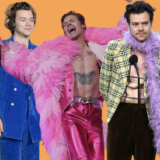 The cover does not show his face

Despite having one of the most recognizable faces in pop music, the album’s cover instead shows Styles submerged in a pink pool of water.

We’ve heard three songs from it so far

Lead single “Sign of the Times” premiered to much fanfare on BBC Radio on April 7, following a teaser commercial released on March 25. The rock ballad’s cryptic lyrics have now been revealed to be about the process of childbirth as opposed to anything specifically political (as the title might indicate).

While the recording has not yet been officially released, Styles performed another song from the album, “Ever Since New York,” on Saturday Night Live this past weekend:

Update (5/2/17): On May 2 on Zane Lowe’s Beats 1 show, Styles premiered his percussion-less, acoustic-guitar-driven second single “Sweet Creature.” You can sample it below and listen via Apple Music here.

The album was executive produced by Jeff Bhasker

Bhasker is a longtime veteran of pop music, having worked heavily with Kanye West on 808s & Heartbreaks and My Beautiful Dark Twisted Fantasy, as well as Bruno Mars, Taylor Swift, Drake, Jay Z, The Rolling Stones and many more. He also co-wrote and produced the entirety of fun.’s debut album Some Nights. On Styles’ record, Bhasker included frequent collaborators collaborators Alex Salibian and Tyler Johnson.

The album was largely recorded in Jamaica

According to Rolling Stone, Styles headed to a retreat in Port Antonia, Jamaica to work with a fixed band on the album, after filming his supporting role in director Christopher Nolan’s new WWII epic Dunkirk:

At Geejam, Styles and his entire band were able to live together, turning the studio compound into something like a Caribbean version of Big Pink. They occupied a two-story villa filled with instruments, hung out at the tree-house-like Bush Bar, and had access to the gorgeous studio on-site. Many mornings began with a swim in the deserted cove just down the hill.

Apparently, the band frequently watched romantic dramas on Netflix “to wind down”; Styles told Crowe he had become an expert on the oeuvre of Nicholas Sparks.

In a March interview, Sheeran clarified that he had written a song that was in the running for Styles’ solo debut, but that it hadn’t made the final cut. “He came round like two years ago and we jammed out a song,” Sheeran said. “I think he’s gone in a totally different direction now.” Previously, Sheeran wrote numerous songs for One Direction, including “Moments,” “Little Thing,” “Over Again,” and “18.”

McDaid told the BBC last year that he’d been assisting Styles with his new music back in May of last year, and asserted that it is more than likely to “rock [our] world.” He described their sessions as open-ended and very casual: “We do the guerrilla thing. I’ve never been in a studio with Harry, we tend to just hang out at his house or mine, or we’ll meet somewhere and set up in a living room.” It’s also possible that Gary Go collaborated with Styles on some of the music for the record. He was listed as a co-writer on four unreleased solo songs Styles registered with ASCAP in late 2015, entitled “5378 Miles,” “Already Home,” “Coco,” and “Endlessly”. However, none of these songs–at least by these names–are on the official track list for Harry Styles.

In Cameron Crowe’s new cover story about Styles in Rolling Stone, he cites some detached lyrics from Styles’ new album, which he heard while profiling Harry in Los Angeles:

While Styles says he still feels like a newcomer to all that, a handful of love affairs have deeply affected him. The images and stolen moments tumble extravagantly through the new songs: And promises are broken like a stitch is … I got splinters in my knuckles crawling ‘cross the floor/Couldn’t take you home to mother in a skirt that short/But I think that’s what I like about it … I see you gave him my old T-shirt, more of what was once mine …

Later in the piece, Styles mentions that he had one dominant muse in particular. Given recent public appearances, the primary suspect seems clear:

He notes a more recent relationship, possibly over now, but significant for the past few years. (Styles has often been spotted with Kendall Jenner, but he won’t confirm that’s who he’s talking about.) “She’s a huge part of the album,” says Styles. “Sometimes you want to tip the hat, and sometimes you just want to give them the whole cap … ?and hope they know it’s just for them.”

Styles’ new work, by his own account, is primarily influenced by “older” music

Pursuant to moving away from his glitzy, technologically-enhanced work with One Direction, Styles told Crowe in their Rolling Stone interview that he primarily listened to “older” music. By Crowe’s account, Styles’ taste is eclectic, dominated by “obscure classic rock” (seems like a bit of an oxymoron, but hey). Here’s Crowe on a few of Styles’ musical favorites:

In the car, he’ll just as easily crank up the country music of Keith Whitley as the esoteric blues-and-soul of Shuggie Otis. He even bought a carrot cake to present to Stevie Nicks at a Fleetwood Mac concert. (“Piped her name onto it. She loved it. Glad she liked carrot cake.”)