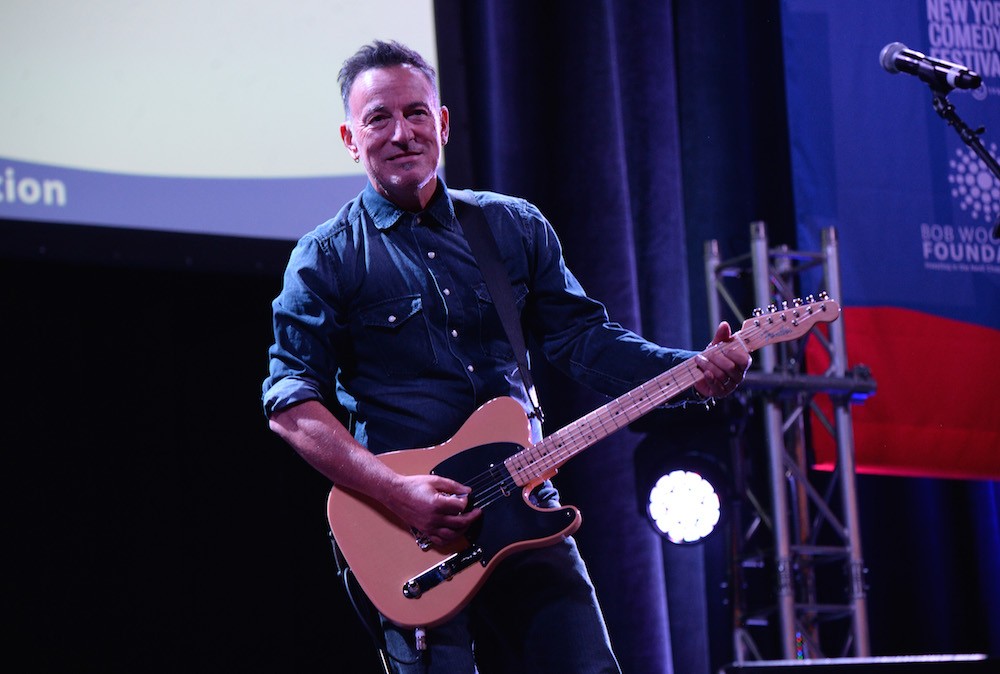 After nearly 18 albums and 45 years in the music business, Bruce Springsteen has established quite the passionate fanbase. One of those die-hard Springsteen fans is two-time Academy Award winner Tom Hanks, who actually happened to win his first Oscar the same year Springsteen also won his — but hardly by coincidence.

The pair worked together on the 1993 Jonathan Demme-directed film Philadelphia, for which Hanks won best actor in a leading role and Springsteen won best original song (for the movie-opening “Streets Of Philadelphia”). They came back together for a special talk at this year’s Tribeca Film Festival on Friday (April 28), just two days after Demme’s sudden death.

During the chat — during which Hanks essentially served as chief Springsteen fanboy, even dishing up famous verses for the audience to finish — the two discussed the singer’s involvement with Demme, as well as stories behind some of his biggest hits, and, of course, why he is so proud to call New Jersey home.

Take a look at some of the most notable tidbits below:

Working with Jonathan Demme on “The Streets Of Philadelphia”:

He had Neil Young working first, so Neil came up with “Philadelphia,” which ended the film, and he wanted a rock song for the beginning. So I said I’d give it a shot, I hooked up my little studio, and I tried for a day or so to come up with something and I hadn’t come up with anything. I had some lyrics. Eventually I just came up with that tiny little beat and a track and I figured it wasn’t what he wanted, but I sent it to him anyway. And he sent me that opening piece of film where the camera moves slowly through Philly. I sent it to him and said, “What do you think?” and he said, “Great,” and that was it. It took about two days.

Why New Jersey is so important to his image:

We were in San Francisco and ended up playing in this little club for hot dogs and toll fare across the bridge called The Matrix. I’m in the bathroom and I’m pissin’ next to this guy, and he says, “You guys are pretty good, where ya from?” and I said, “Jersey,” and he said, “What’s that?” He didn’t say “where’s that,” he said “what’s that.” That was it. After that, I knew. Also, when I made my first record, they were trying to tie me to New York, and I felt like I wasn’t really a New York artist. I wandered down the boardwalk and picked out the postcard “Greetings From Asbury Park,” and it was Jersey all the way ever since.

The story behind debut album Greetings From Asbury Park, N.J.:

I didn’t think I had a story, but you know, I was kind of living one at the time. I’m in Asbury Park, living in an abandoned beauty salon. I’m there with all these assorted street characters who were in Asbury at the time, and the record got mixed up with all of those people and that setting, and basically it was semi-autobiographical. The lyrics came out of carnival life and boardwalk life, so it comes to you. It just kind of came to me.

Why Greetings From Asbury Park didn’t have guitar:

[Trying out for a record deal] I had a guitar, I played “Saint In The City,” one song, and [producer] John Hammond said, “You gotta be on Columbia Records.” He said, “But you gotta play for [then-Columbia president] Clive Davis next week.” So I went in and I auditioned for him and they signed me. But there was no guitar, because initially they wanted me to be purely a folk singer, which is what I looked like I was when I came up to John Hammond’s office. And John Hammond wanted it to be a completely solo record with just me and the guitar, but we wanted to make more of a rock record, and so we sort of settled in the middle with sort of a rhythm section with acoustic music. I like the way it came out.

How Jon Landau influenced The River:

It was a classic title, and I’d kind of run through a lot of my rock influences — at that point, I was deep into the working-class blues. But I was also beginning, through one of my greatest mentors, Mr. Jon Landau, who was a film critic and began to get me to watch films. And the first thing I remember is John Ford’s Grapes Of Wrath. The humanism in it was something that touched me deeply, deeply, deeply, and I said, “Yeah, I want some of that in my music.” So then comes “Promised Land,” “Racing In The Street.” And then I got hooked into the noir writers, James M. Cain… and then that sort of hooked me into The Postman Always Rings Twice, Double Indemnity, and all the great noir films.

What he wants his live performances to achieve:

I think the writer tells a story to save his life, to experience his life in the fullest. A good rock song is three minutes of bliss and compressed living — that’s why you can get so excited in such a short period of time. But also, your motivation is to keep yourself afloat. It’s that life-or-death hunger, that was what I wanted my characters to be about, I wanted them to be chasing, it’s what I wanted to communicate to my audience — that life awaits you, but taking it is a rough-and-tumble business.

Why “Born In The U.S.A.” almost didn’t even make his seventh album:

I remember at the time thinking, “It’s too glib.” I think I still think that. But at the same time, [E Street Band member] Stevie [Van Zandt] said, “No no no man, it’s about the band, the brotherhood of your band and your fans.” And at that time, I gave him the benefit of the doubt and I said, “OK, let’s put it on [the record].” We play it a lot, we’ve played it an awful lot ever since. But I was always a little frightened. The whole record, I always have mixed feelings about.