There is no facet of American life that Alex Jones cannot ascribe to a vast and shadowy international plot to undermine U.S. sovereignty. For evidence of this, watch his classic rant about how Justin “Biebler” is a pawn in a globalist crusade to tighten gun control, levy carbon taxes, and close your doors to perception. While testifying in his custody trial today–on 420, no less–Jones revealed yet another seemingly benign thing he believes to be a product of the conspiracy: sweet, mind-melting high-grade cannabis.

To hear Jones tell it, that loud, that lemon sour diesel, that OG Kush, that headband, those Girl Scout Cookies, the fact that you can no longer take a bong hit without momentarily losing the ability to form a sentence–all of it stems from George Soros, the liberal financier who is public enemy number one in Jones’s cosmology of international power players. The conspiracist radio host, who is fending off an attempt from his ex-wife Kelly Jones to obtain joint or full custody of their three young children, was questioned about his own drug and alcohol use on the stand today. Here’s how he answered, via BuzzFeed’s Charlie Warzel, who is covering the trial in Austin:

Jones said he sometimes smokes marijuana — nearly yearly — “to monitor its strength, which is how law enforcement does it.” He then added that he tested it because he believes it is now too strong — a development he blamed on billionaire and political donor, George Soros, who he claimed in court has “brain damaged a lot of people.”

Incidentally, that’s a perfect excuse for Jones’s kids–or any kids, really–to offer next time their parents catch them lighting up. “Just testing its potency, mom. Trust me, this is how law enforcement does it.” 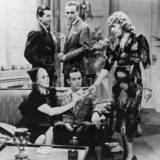 Best Stoner Movies of All Time

Jones added that he recently smoked weed while on Joe Rogan’s podcast, adding that it’s legal in California, and that “everybody smokes marijuana on that show.” The “c’mon, all the other kids are doing it too” excuse, on the other hand, has proven less effective over the years.

For more on Jones, read SPIN’s profile of the host from last year.