Travis Scott on the Time He Fell Through a Hole in Drake’s Stage: “I Didn’t Fall, Dude. I Flew.” 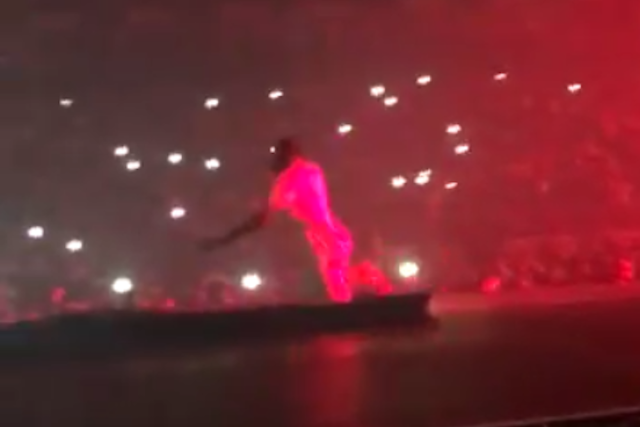 In early February, Drake brought out Travis Scott as a guest at one of his London tour dates. In between performing a few of his songs, Scott, while walking around, fell through a giant hole in the middle of Drake’s stage. In case you missed it the first time, or wanted to revisit Travis Scott throwing himself through the floor:

We can all agree that this is a very good video of Travis Scott plunging, if ever so briefly, into the depths of hell.

In an interview with the British edition of GQ Style (stay with me here), Scott finally addressed the incident, and I have to say he gave a pretty convincing argument for why plummeting into the gaping maw of Drake’s elaborate stage set-up while 20,000 people hear your Autotuned yelps is actually an extremely cool and thrilling life experience:

“I didn’t fall, dude, I flew. I was floating. I don’t fall. Shit, nothing happened. Floating is amazing. It’s like getting in a plane. I just flew, man. I’m a magician, like David Blaine. I could never fall.”

Last night, Scott also released a short film which shares the same name as his album, Birds in the Trap Sing McKnight, supposedly to commemorate 1 billion streams, and not the one time he thought he was performing in front of a sold out crowd in London only to find himself hurtling through the pitch black that lies beneath. Watch it via via Apple Music.