All Eyes On, Interviews

With the reality of the internet, “scenes” and “genres” feel like they’re becoming increasingly outdated concepts. Consider Lil Uzi Vert‘s quest to blend hip-hop and emo signifiers to become a self-proclaimed “rock star.” You could also look at Evanston, Ill.’s Kweku Collins, whose uniqueness is a focus of profiles covering the rapper. His music combines the sounds of 1997 Fort Greene with 1996 Atlanta, but what sets Collins apart from his peers and their prideful genre transcendence is how his peculiarity isn’t an ends to itself. Instead, it compliments his ability to express the perspective of a millennial at an existential and personal crossroads through the specificity of his pen. The effect makes his minor epiphanies feel euphoric. “The opportunity has arisen for me to contribute to something that I see as bigger,” he says in one of the final lyrics to his excellent 2016 effort Nat Love.

“I’m not saying that I’m like that big or anything, that I have that much profound shit to say, or that I’m that important to the way that the world works” Collins tells SPIN. “I’m part of a group called Closed Sessions in Chicago. I’ve been kind of included into that whole system and that whole thing I feel like now I’m contributing to that.”

Collins is following up Nat Love with the new EP grey, which he expects to drop sometime this April. Before the release, the 20-year-old talked to SPIN at Bar 96 in Austin, his low-volume voice barely registering over the venue’s speakers. He’s admittedly shy and a tad awkward—we dap three times as we say goodbye after our 12-minute conversation (to his defense, I initiated all of them)—but his teal eyes rarely break contact with mine, hinting at a quiet confidence that’s emboldened by his art. Read the interview, condensed and edited for clarity, below.

Some of the profiles I’ve read harp on you being different. How does that strike you?
I don’t care. Because I’m different, you dig? I’m a fuckin’ mixed dude who paints his nails with dreadlocks who wears Doc Martens. If that ain’t different, fuck. But in that same breath, the internet is so beautiful because then I can meet people that look like me, and think like me, and act like me, and dress like me. So when people say I’m different, it’s kinda like, “Fuck yeah.” 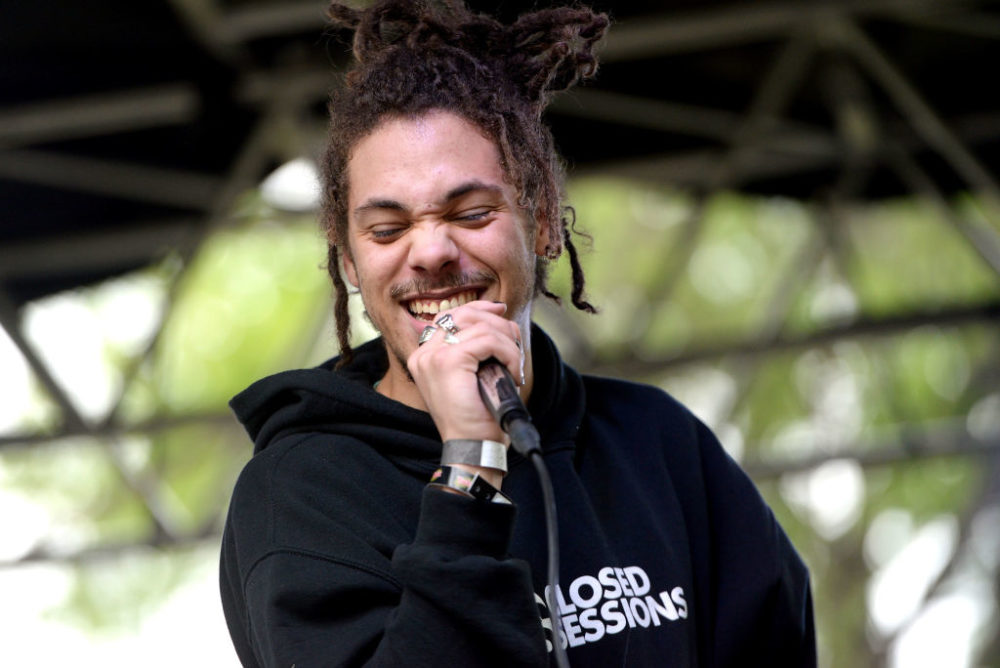 Has it been an adjustment with the spotlight on you?
It’s not much to adjust to, because when I look at music and when I look at going to festivals, I’m there to work. I’m there to you know, just further this path that I’ve always desperately wanted to be on. I’m kind of a shy person most of the time, but when I’m on stage, that’s when I like attention.

Your recent song “International Business Trip” touches on adjusting to fame, which is a new place for you. Is writing from that perspective more difficult? Definitely. It was like a new realm of like existence. And it was a new thing to write about and it’s a new thing for me to adjust to like being in my hometown and people like “Aren’t you [Kweku Collins]?” and people in other places. Like I said earlier, I’m just like a dude. I don’t really buy into all that fame and shit or whatever. I’m a person who makes music, it’s what I do.

Is there a responsibility for you when it comes to making art with Chicago’s and Trump’s narrative on top of it?
I’m from a town north of Chicago. So the Chicago narrative is not my narrative. I feel responsibility to direct people to the people that talk about that narrative. Not that I’m like the source of all Chicago music but it’s just like when people ask me who I’m listening to or who in Chicago do I fuck with, it’s like, Alright, let me tell these people who to listen to so they can know know the story of Chicago.” What’s going on in the South Side or the West Side of Chicago. But as as a male of color, I do feel a responsibility. But that responsibility is the same as every black male or black person in America, especially artists, creative, writers, and people that do have a voice that other people listen to. It’s always been the same responsibility: What is the black experience in America?

What’s your favorite book?
I knew that question was coming, but I just didn’t have the time. I’m gonna list off favorites. I’m huge into [Lois Lowry’s] The Giver, and more recently, [Ta-Nehisi Coates’] Between the World and Me. I feel like that was a book that was more written for me. It’s a black male talking to a younger black male about his experience in the world, so that had a really profound effect on me. I also like Americanah and The Alchemist.

Feels like white liberals are claiming Between the World and Me pretty heavily, too
My sister put me onto that when it came out. And she was just like, “You need to read this.” And then like a week later all these white people were coming up to me like, “Oh, my god! I’m learning. I feel like this book was written for me.” And I read the book and I was just like, “Yo, y’all should read it to understand what we like, how we exist.” But this book wasn’t for you. This isn’t about you. This about us. You know, that’s the that’s the way of the liberal.

Get Out will probably eventually go that route.
Oh my god. Yo, man.