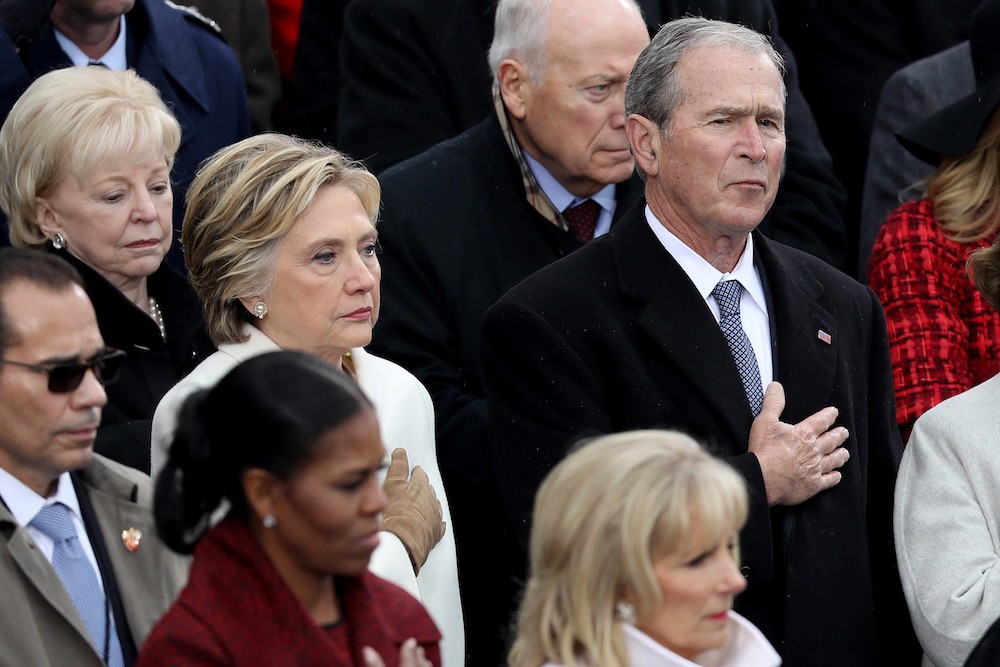 Yes, George W. Bush sent America into war in Iraq based on the false pretense that Saddam Hussein was stockpiling weapons of mass destruction. Yes, he is responsible for the deaths of hundreds of thousands of Iraqis and thousands of U.S. service members. Yes, he bears a good chunk of the responsibility of the 2008 financial crisis. Yes, he is an evil man, and no, Donald Trump’s insane presidency shouldn’t make you gaze back lovingly at the Bush years, no matter how charming his paintings are. With all those caveats out of the way, however, it’s still possible to enjoy W.’s reaction to Trump’s inauguration, as relayed in this delightfully gossipy item from New York magazine.

Much was made of Bush’s appearance at the inauguration at the time, after he’d been publicly slammed by the president-elect over and over on the campaign trail. He had a hard time putting on his plastic poncho. He smiled and chuckled a bit. He sat next to Hillary Clinton. But what did he really think of the proceedings? New York has the scoop:

But, according to three people who were present, Bush gave a brief assessment of Trump’s inaugural after leaving the dais: “That was some weird shit.” All three heard him say it.

Damn–very true. If only Bush had decided to be an eccentric minor league baseball coach or full-time outsider artist instead of the leader of the free world, we’d be able to laugh along without feeling guilty about it.