Did This Infamous Interview of Biggie Rating Other Rappers Ever Actually Happen? 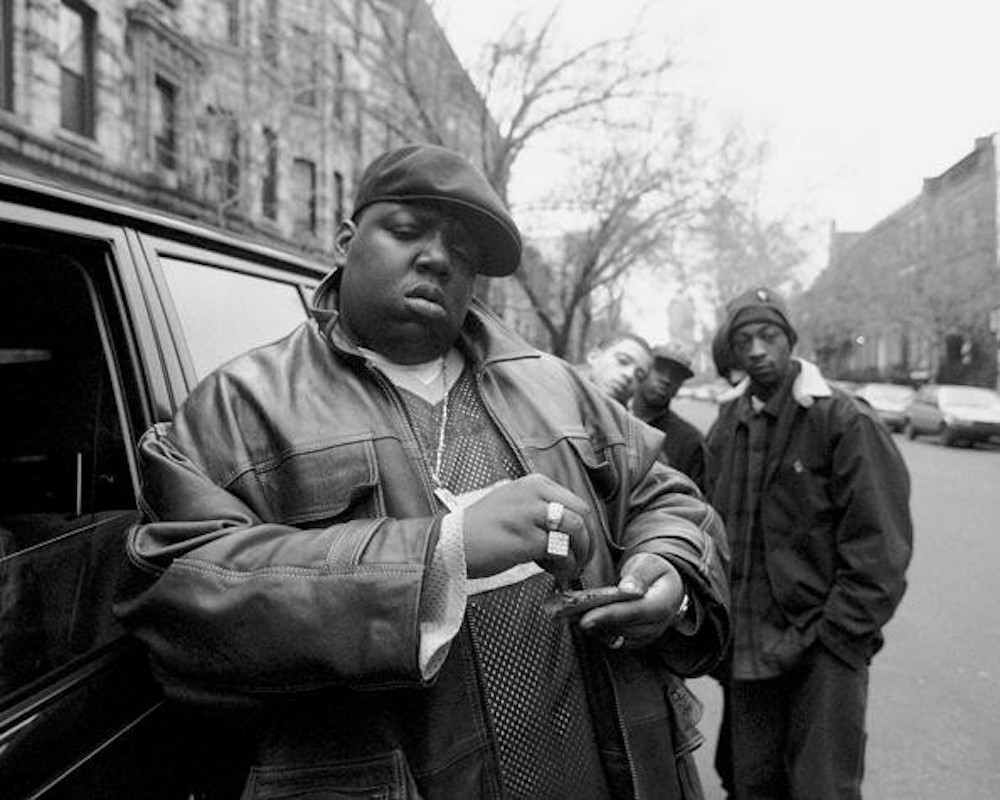 According to internet lore, sometime during the prime of his career in the mid-’90s, the Notorious B.I.G. sat down with a journalist and a small crowd of onlookers and gave his extremely frank assessments of dozens of rappers and producers who were his peers. Biggie’s responses ranged from rapturous (a 10 for Too $hort: “That’s my dog. I love that nigga.”) to withering (on Ice Cube: “The new one or the old one?”), from surprising (on onetime collaborator R.A. the Rugged Man: “I did the song, they paid me a lot of money, that’s why I did it.”) to critically astute (“I don’t like [KRS-One] no more ’cause he just think he’s too dope. He let his ego take over his shit.”). On the anniversary of Christopher Wallace’s death, the interview is being passed around the internet once more as a celebration of the rapper’s legendarily large personality, but one important question remains unanswered: Did it ever really happen at all?

You can find references to the infamous interview on a variety of hip-hop blogs and message boards from over the years, under headlines like “Notorious BIG rates his favorite rappers on a 1-10,” “Back in 95′ Biggie was asked to rate certain rappers & their skills,” and “The Notorious B.I.G. rates his favorite rappers from 0-10 in 1994.” As you may have noticed, the circumstances under which Biggie supposedly gave his ratings are subject to frequent changes. Sometimes, it was in 1994, sometimes, ’95, sometimes “a year before he died,” which would put it in 1996. Sometimes it was a magazine interview, sometimes “a radio interview out in the Bay.” Pretty much every time it comes up on a message board, the users there start to argue about its authenticity. But the text of the interview–full of typos, parenthetical narrative asides, and creative punctuation–pretty much always remains the same. You can read the whole thing here; we’ve excerpted some of it below:

Redman: The new Redman!?! Seven. I can’t diss him cuase I know he got skills. He get busy on the lyrics but I can’t feel his new shit, his new cosmic crazy shit. I’m used to the clean cut blowout fly nigga. When I met the nigga he was a fly nigga, you know what I’m sayin’, now he on some different shit I really don’t like when a rapper come out and they blow up the way they are and they come out again on some changed up shit. To me, that’s like getting some good coke from poppy and then getting some money and then be like,’fuck that! I’m getting some more 45ths, some brown shit and then bag that up.’ Why would you change your plan? That’s what he did to me.

Craig Mack: I don’t really like him too much either, dog. I can’t give him a zero though ’cause he got some hot shit but like five…four, since he on some different shit, some shit I can’t relate to. I’m from the hood, he from the suburbs so it’s completely different shit. I don’t really like the music too much. I like the beats but that (scats) it’s not rhymes for me, it’s just some prety kid shit.

KRS-One: KRS-One?? Naahhh…I don’t like KRS no more ’cause he just think he’s too dope. He let his ego take over his shit and that’s what brings him down. When he was like that (shouts “Blow it to yourself”), when he was like that, then he was a ten but now, ‘I am Hip Hop’!!! Eat a dick nigga. Eat a muthaphukkin dick!

R.A. The Rugged One: The white boy??!! The one that I did the jam with??? That’s who you talkin’ about? Two…might be a three, I did the song, they paid me a lot of money, that’s why I did it. The beat was knockin’.

Tupac: Pac get busy. People can’t take nothing from him. On the lyrics he get busy, straight up. That nigga got some hard shit dog for real, and it’s like the sad thing about it. When he started working on his new album he’s got now, Out on Bail, (retitled and released as Me Against The World) he had so many raw east coast producers and shit. The shit was sounding real tight ’cause everybody always says Pac had lyrics but his beats was back. He was up in New York when he was working on Above the Rim shit and he was working on his album at the same time. I put him on to Mo Bee. I put him on to L.G. He has Action, Special Ed’s DJ, he had some hard shit. (HE) went back to the west and just started getting back into that other ****.

We spent the afternoon digging around the internet, looking for definitive proof one way or the other way of the interview’s legitimacy. Its existence as an internet rumor seems to have started back when Biggie was still alive, on what might be the web’s oldest rap message board, a former Usenet newsgroup known as RMHH, now archived on Google Groups. On July 21, 1995, an RMHH user named G. Smith posted the text, with all of the quirks of transcription that made it into later versions intact. “It is a rate the rappers session Biggie had while in Toronto. People would call out rappers names and he would say what he thought of them,” G. Smith wrote. “The magazine I got this from is a free magazine called ‘Peace’. They say it’s on tape so it’s word for word Biggie.”

A Google search for “Peace magazine Toronto” turns up only references to another Peace, an antiwar publication that also happens to be based in the city. Though that Peace was around and publishing back in ’95, somehow its hard to imagine five pages of rap shit-talk sandwiched in between arguments for nuclear disarmament. In a response to G. Smith’s original RMHH post, another user mentioned that “the magazine in question has a web site,” providing a link that now leads to an error page, and that is not preserved on the internet archive. G. Smith’s 20-year-old forum signature contains an email address, but messages sent to it immediately bounced back.

Even back then, the people on the board were arguing about whether the interview is real. “I can vouch for the interview’s veracity,” someone named Pre$tige wrote. “Did you pick up that magazine at HMV? My friend got his copy there, and told me about it a while back.”

That’s pretty much where things stood until 2013, when a user on the sports and hip-hop message board The Coli turned up what looks to be a Peace magazine cover sporting a coverline about the interview, and another advertising “SEVEN GOOD POINTS ABOUT SNOW FROM HIS MOM!!” Behold: 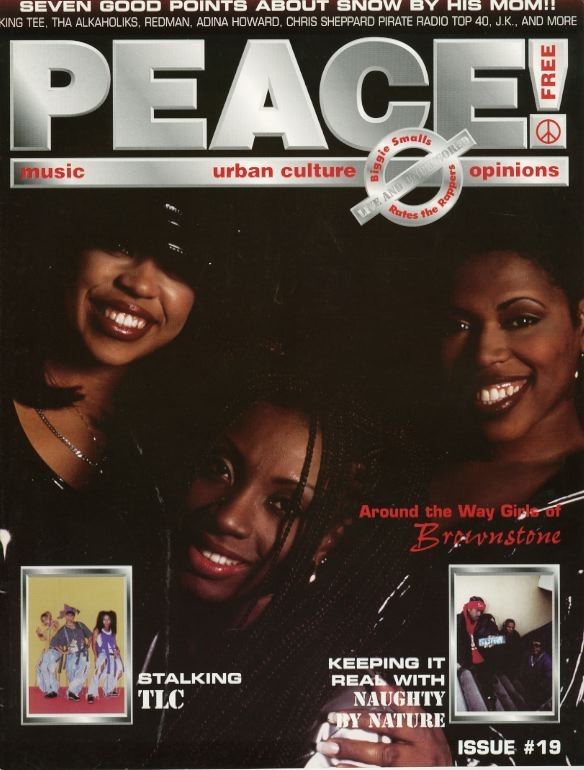 Is it real? A photoshop? There’s no other information about the magazine online, but it’s not unfathomable that a small-run free Canadian magazine from several decades ago could have vanished with hardly a trace. And considering the legacy of scrappy underground rap magazines like Murder Dog in the ’90s, it’s also possible that a long-since-forgotten publication would have been given access to one of the genre’s biggest stars.

It’s easier to imagine Biggie getting drunk and running off at the mouth one night than it is to think of someone fabricating the interview and magazine cover and passing them off as real, but Occam’s razor isn’t enough to verify it. The best argument in favor of its authenticity is the fact that E-40 seems to believe it. “I was upset that he had did an article in a Canadian magazine,” the Bay Area rapper said in a Complex interview in 2013. “I guess they got him hella perkin’ and whatnot, and they asked him from 1-10, how do you feel about these artists…I know he gave me a zero.”

In the interview, E-40 implies that his crew asked if he wanted to put a hit on Biggie, and that he called it off and talked it out with Biggie instead. “I got on the phone with dude, and I said, ‘You know, I didn’t know you felt like that,'” he said in the interview. According to E-40, Biggie responded by saying “Nah, I fucks with you. I fucks with ‘Sprinkle Me,’ duke.”

So on the one hand, E-40 believed it, but on the other, Biggie seemed to deny that he disliked E-40’s music–raising the intriguing possibility that even at the time the interview was making waves in the rap community despite the question of its veracity. Maybe Biggie really did do the interview, but had already forgotten about it by the time E-40 brought it up.

SPIN reached out to an E-40 spokesperson to discuss the matter, but did not receive a response. However, we did hear from R.A. the Rugged Man, who vehemently denied the interview’s authenticity, and said that he once went as far as seeking legal advice about the matter. “That quote about me was not authentic at all. I’m not sure about the rest of the interview but I can say for sure what was said about me was not real…Possibly the writer added that about me because he had a personal issue with me, I’m not sure, I was very disliked personally by a lot of people at that time,” he wrote. “I knew Biggie personally for years, I been to his crib, he’s been to my Long Island crib, We were actually friends and spoke regularly. He shouted me out in the credits of both his albums. We made more than one song together.”

R.A. also pointed to another viral Biggie quote: “I thought I was the illest,” which he reportedly said in reference to R.A.’s skills after a session the two men had together. “It’s a shame that SPIN will give this story more shine as well, because it gives this fake quote more shine,” R.A. added. “The public will always go with the narrative they want to believe, whether it is true or not.”

He’s probably right about that.

If you know more about the interview in question, please drop us a line at [email protected]