Nothing interesting ever goes on in rural Iowa, but nevertheless, something strange has happened to Jeremy Heldt and Sarah Jane Shepherd. Recently, customers at the Video Hut in Nevada, Iowa—the video rental store where Jeremy works, and which Sarah Jane owns—have returned copies of teen rom-com She’s All That and Peter Bogdanovich-directed drama Targets that they claim are just a little… off.

This is the unsettling lead to John Darnielle’s second novel, Universal Harvester, a book about twenty-somethings unraveling a mystery located within the sleepy Midwestern sprawl. As he inches toward some explanation of the videotapes, we get references to police reports, diaries of main characters read years later. Darnielle teases versions of the story where Jeremy’s curiosity subsides, and he’s able to find a happier ending, moving to a bigger city or finding a better job. But that’s not the case here, Darnielle warns: “In this version, he keeps his job at the Video Hut, and then something else happens.”

For example, the tape of Targets starts out normally before narrative is interrupted by scenes that aren’t in the original film—which someone like Jeremy, who doesn’t know much about a movie like Targets, can easily tell. In one of those scenes, a hooded figure sits strapped to a chair inside of what appears to be an outhouse. At least she appears to be strapped to the chair, but she stands up and starts making a series of alien yet graceful poses, like someone trying to mimic ballet after only reading about it in books. An unseen figure from behind the camera extends his hand, which is holding a paintbrush, and begins to trace shapes onto the person’s hood. The shapes are indiscernible. The camera moves to a door, then gets flipped on its side, right before someone speaks “Wait. I didn’t—” and is cut off.

There are other scenes like this on other tapes, which have rightfully freaked them out. Things get creepier as Sarah Jane realizes she recognizes the location of the outhouse by spotting a familiar house in the background of an exterior shot, which is seen in another tape. Without telling anyone, she pursues her instinct to Collins, a nearby town, and meets a woman who seems obviously connected to the videos, though it isn’t apparent how. Sarah Jane leaves without incident, but as she tells Jeremy, the suggestion of something eerie living so close by paralyzes her with anxiety: 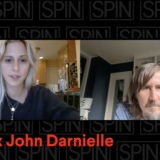 “I grew up out there,” she said again. She looked at Jeremy, making sure he was there to bear witness. “That place has been there since I was a kid.”

“The house,” said Sarah Jane, reaching back into her purse and retrieving the printout of the frame from when my hand slipped and the front porch came into view.

That seamless, hair-raising switch from third-person to first-person—from when my hand slipped—is the first sign in Universal Harvester that this mystery is unfolding under the control of a specific someone who has seen how all of this ends. The unreliable narrator with potentially sinister motivations is a new wrinkle within Darnielle’s work, which has long concerned itself with the small town loser—the pimply teens plotting a death metal band, the tweakers losing their minds inside of a Travelodge. His first novel, 2014’s Wolf in White Van, followed the lonely life of the disfigured creator behind a mail-order tabletop RPG. Universal Harvester is largely the story of Jeremy, a late ’90s nobody whose mother died in a car accident six years ago, when he was still a teenager. He lives with his father, a stand-up guy, and the two men have locked themselves in a comfortable if dreary co-dependent routine, marked by the number of beers consumed and college football games watched.

Like many young people trapped by their circumstances, Jeremy isn’t dumb, but he doesn’t have much going on and lacks the will to get after it. Better job opportunities pass by, and he evades them; crushes develop, and he doesn’t pursue them. “He feels ashamed of being twenty-two years old and not having made anything of himself yet; he’s resentful when something reminds him of it,” Darnielle writes.

It turns out that more of the tapes contain these types of weird clips, whose secrets do not reveal themselves upon repeated viewings. He, along with Sarah Jane and a customer named Stephanie, decide to play detective, though it takes them a while to motivate themselves into properly pursuing the threads. (It’s the Midwest; it’s easy to do nothing.) What they discover sets off a chain of events spanning decades, as the mystery unfurls. We leap to the story of a young woman whose mother joins what appears to be a religious cult; we vault ahead to a family that discovers what Jeremy was getting himself into, before the answers have been provided for us.

All of this makes Universal Harvester seem like a horror novel, though there’s none of the easy release of finding a monster hiding in the closet. “I want that glimmering moment from before the thing you don’t want to see happens,” Darnielle said in an interview. “I want that moment of dread.” He was inspired to write this book out of a desire to capture the shopworn, jocular conversational rhythms found in the Midwest, where definitive meanings are subsumed by hints and gestures. Universal Harvester contains so many friendly conversations where nothing is revealed, until suddenly and subtly, something is.

Darnielle’s anonymous narrator combines a documentarian’s clinical flatness with a pragmatist’s clear-eyed understanding. The moments of dread don’t overwhelm the book, as we pass the time with characters whose lives haven’t been entirely consumed by the mystery of the tapes. He often pulls back from one of those telling conversations with analysis meant to evoke sympathy and respect. In one scene, Stephanie tells Jeremy he has to get out of Iowa:

He wrinkled his brow, alone there in the store with Stephanie, trying not to feel stung but thinking she could probably see it on him.

“You’re right,” she said, their eyes meeting. Not too long. “I hope I see you before I leave, anyway.” Then she smiled the smile that few outside the region will ever master, a no-problems look that paves over rough road without making any big deal about it. But he felt the needle land where she’d aimed it, as he did sometimes when people who didn’t understand his family weighed in about his life, telling him how it looked from the outside. Another nagging little question lodged like a bit of grapeshot in his chest. It was nothing major, but the place where he stored them all was running out of room.

Both Universal Harvester and Wolf in White Van are centered around mysteries that resolve so slowly the answers come as a foregone conclusion, as if the reader is lowering into a darkened mine shaft whose floor becomes visible from several feet away. The reader’s eyes adjust; his feet brush against the bottom before finding stable footing. Wolf in White Van gives a more explicit answer as to why its protagonist is the way he is, but Universal Harvester makes a slow pivot away from its horror beginnings, before ending in a more tender place than I could’ve anticipated . I finished the book with a mild sense of disappointment, waiting for a moment of skin-freezing revelation that never came. Where was the heart-pounding action, the blood-curdling scream, the heightened stakes?

Well, maybe in genre fiction or in pop songs, but not here. It’s tempting to compare Darnielle’s prose to his songwriting, because so much of his music draws its power from his ability to craft and conclude intimate, believable worlds in just a few lines. His best known songs like “This Year” or “No Children” introduce a scenario—the troubled teenager, the warring couple—and steadily build to triumphant catharsis. Similarly, Wolf in White Van burrowed into a life marked by tragedy, until a conclusive, harrowing climax built up by the pinpoint detail of the narration.

Universal Harvester, by contrast, views its characters from a distance. Their motivations are simple, or altogether unexplained. As time goes on, we learn they’re unified by grief, which has warped them from the inside and erected a wall between them and other people. At one point, Jeremy’s father—a widower, and father to someone who might veer from a good path—describes how he’s chosen to survive the loss of his wife. “I watch what’s left of my life like a security guard on the night shift, checking the locks when I know I don’t need to, pacing the perimeter of someplace nobody’s going to break into, except that you never know,” he writes. “Something could happen. So you keep watch. They don’t pay security guards just because they’re a few bodies short on the payroll.”

The revelation of what’s going on with the videotapes doesn’t come until late, either, and yet it’s still a little unclear precisely what was going on. By that time, though, Darnielle has ably described how the bigger, more unresolvable mysteries might animate an entire life. One meditation on the resiliency of children hints at these underlying fractures, as Darnielle explains the mechanism that allows one of his characters, a young girl, to overcome the unexplained disappearance of a parent.

“It’s efficient, and flexible, and probably transferable from one person to another should they catch the scent on each other,” he writes. “But the rest of the details about it aren’t observable from the outside. You have to be closer than you really want to get to see how it works.”  This is a telling wink—an acknowledgement that Darnielle, for all of his literary ability, might never be able to put his finger on the exact way grief operates on a person. But the point is that people go on, even if the explanation of what happened to them remains occluded, out of sight.

Listen to an excerpt of Universal Harvester‘s audiobook, read by Darnielle: