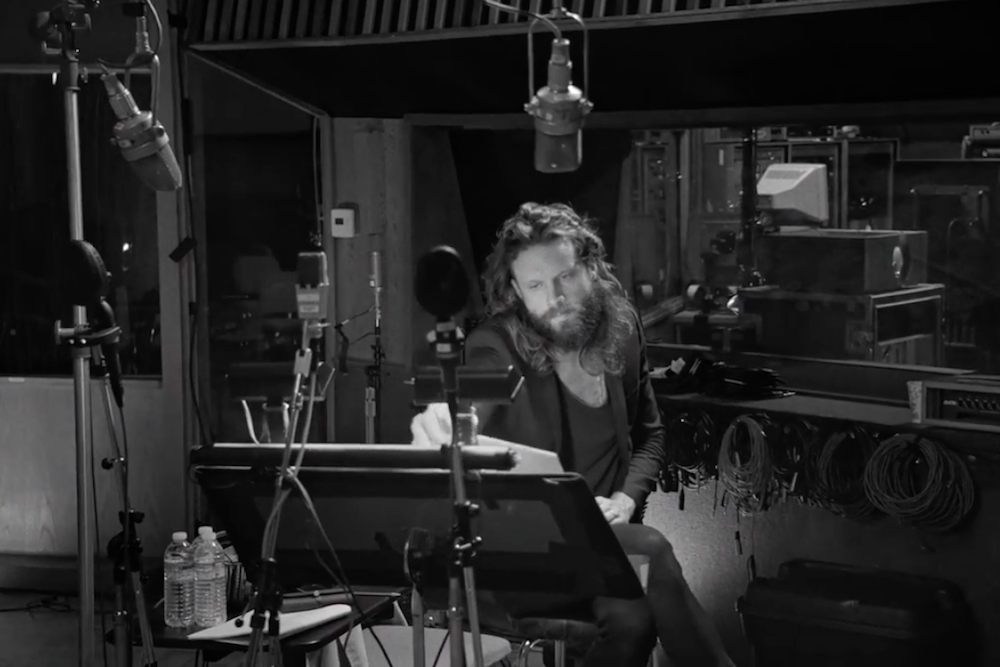 In April, Father John Misty will follow up 2015’s excellent I Love You, Honeybear with a new album called Pure Comedy, Pitchfork reports today. The news follows the release of a video for the title track, which dropped yesterday.

Sub Pop announced the upcoming release with a 25-minute short film, featuring Josh Tillman in the studio looking as handsome and bearded as ever, interspersed with dreamlike shots of Los Angeles burning and pans of Pure Comedy’s intricate cover art. There’s a song snippet at about five minutes in–probably “Ballad of the Dying Man,” judging by the track titles, which were also released today–that sounds especially promising.

The album was produced by Tillman himself and Jonathan Wilson, and features contributions from the composers Gavin Bryars, Nico Muhly, and Thomas Bartlett. Watch Pure Comedy: The Film below, and check out the tracklist and album art by New Yorker cartoonist Ed Steed via Pitchfork after that.

UPDATE: Tillman has also shared an essay about the album, and from the looks of it, he intends it as nothing less than a commentary on the history and the state of the human race itself, up to and including our current political quagmire.  Read it below the tracklist. 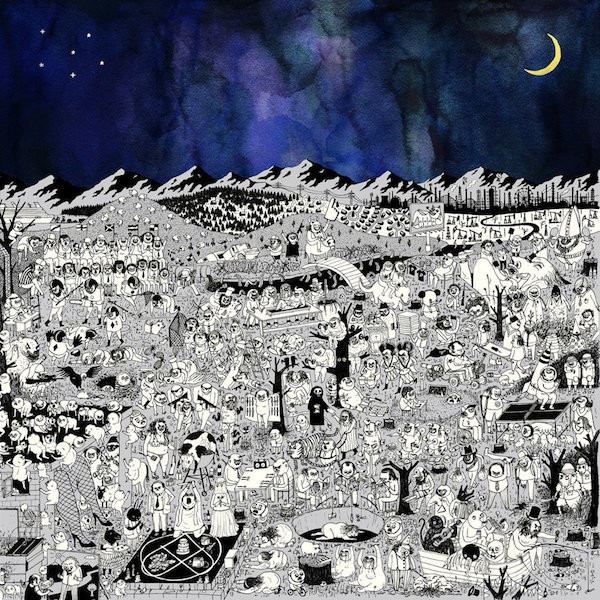 Is there a thing of which it is said, ‘See, this is new?’
It has been already
in the ages before us.

There is no remembrance of former things, nor will there be any remembrance
of later things yet to be
among those who come after.”
– Ecclesiastes

Pure Comedy is the story of a species born with a half-formed brain. The species’ only hope for survival, ?nding itself on a cruel, unpredictable rock surrounded by other species who seem far more adept at this whole thing (and to whom they are delicious), is the reliance on other, slightly older, half-formed brains. This reliance takes on a few different names as their story unfolds, like “love,” “culture,” “family,” etc. Over time, and as their brains prove to be remarkably good at inventing meaning where there is none, the species becomes the purveyor of increasingly bizarre and sophisticated ironies. These ironies are designed to help cope with the species’ loathsome vulnerability and to try and reconcile how disproportionate their imagination is to the monotony of their existence.

Now all of a sudden they expect light in the dark, warmth in the cold, and to make something out of nothing. Cooperation among the species to achieve these goals eventually yields a worldview wherein some among the species believe that there are individuals for whom this type of work is maybe ill-suited. The contribution of the ill-suited is of a more abstract, inspirational nature. The ill-suited begin to make subtle distinctions among themselves that extend beyond “eaten by a bear/not eaten by a bear”. These distinctions involve do-it-ness, cool-face-and-body-ness, craftiness, etc. – an arrangement emerges where these traits can be traded in for better-than-ness. This better-than-ness really starts to run rampant, and the species begins to wonder if there isn’t a Sky-Man in the sky who is perhaps the source of all better-than-ness. It seems like a pretty good explanation for why the species is so important.

Sky-Man pretty much runs the show for a really, really long time, and his inner-circle of better-thans gets increasingly smaller and smaller, even though by the end of his reign everyone in the species considers themselves one. Unfortunately there are some better-thans who get together and decide that one way of better-than-ness is better than other betters-thans’ better-than-ness and teach their little half-formed-brain babies as much (most who interpret this distinction as “me’s” vs. “not-me’s”). “Not-me’s” eventually come to encapsulate everyone that is not a single “me” at any given time, and this paves the way for incredibly distasteful behavior until the species arrives at a place of such alienation and fear there is really nothing so horrible that one of them wouldn’t do to the other. To deal with this less than ideal state of affairs, which seems suspiciously incompatible with how progressive and evolved they are by this point, they set about to entertain themselves into an oblivion with politics, sex, ?nance, philosophy, and other games of war. This they do until they are so numb, and the idea of any “not-me” so untenable, that they are blissfully incapable of noticing they’re all dead. This happens more or less on an in?nite loop until the end of time.

Imagine if you will, as the album starts, that you’re way out in space looking at the earth and, though it’s impossible to “fall” through space, you start a free fall anyway in the direction of the bright blue marble. For the next 75 minutes you plummet toward the earth, losing more and more perspective on what an abstract and impermanent place our planet is, how predictably we step on the same rakes, slip on the same banana peels over and over again through the ages, quickly becoming more and more immersed in the very messy business of being a human – the dubious privilege of being here, the elusiveness of meaning, true love and its habitual absence, random euphoria and the inexplicable misery of others, truth and its more alluring counterfeits, the sophistication of answers that don’t make any sense, the barbarism of our appetites, lucky breaks and injustice, faith and ignorance, crippling, mind-numbing boredom, and the terror of it all ending too soon. Before you know it, you’ve delicately crash-landed and ?nd yourself lying on your back looking up at the stars. If you’re lucky, with someone you love; even if just for a day, a year, a lifetime. Though just an hour has passed you have no recollection of what the earth looked like from the far-?ung reaches of space, nor how simple it all seemed a matter of minutes ago.

I know everyone doesn’t feel the same about what’s going on right now. What for some is clearly garden-variety violent white nationalism serving as a catch-all for any number of paranoia-induced anti-fantasies foisted upon the poor and uneducated precisely by the ideologues bent on manufacturing voters who can be manipulated into voting against their own interests by making good and sure they remain poor and uneducated before cravenly blaming their problems largely on people bearing distinctions like race, gender, and sexuality so people forget everything that’s good about the American experiment, is to others an opportunity to wrench the country back from the in?uence of hypocritical corporate tyrants bent on enslaving our minds with spineless liberal rhetoric in order to justify wiping out the jobs of decent people so they can ful?ll their fey utopian dream of an impossible global community designed to pro?t only its architects (probably Banking Consortiums, pedophile rings, and de?nitely The Illuminati).

This album does not espouse either of those views.

Both of those views take for granted a certain degree of sophistication, or at least a knack for cooperation, that I’m absolutely convinced humans do not possess; not to mention some kind of innate logic to the proceedings here on Earth – which make a much better case for being some kind of demented joke than anything else.

The terrifying reality concerning the dilemma above is everything is chaos and no one is really in control of anyone or anything.

But what about the well-documented history of humans making life a living hell for other humans since time began?

Things are the way they are because this is how we, the human race, want them.

This is how we want it.

Hold the motherfucking phone. Josh Tillman, you have said and done some stupid fucking things since we’ve known you, but this is too much.

Now the liberals and the conservatives are both outraged because that is a sentiment that is so profoundly insensitive to the ways in which the other side is clearly wrong in objective ways regarding basic decency, but what’s the alternative? We’re either all complicit in this purest comedy, or the people who aren’t to blame are at war with the people who are to blame until everyone is dead. Simple as that.

Is progress possible? What does it look like? The conversion of everyone to our respective beliefs? Well, we’ve seen how that typically goes. The destruction of everyone who fails to conform? That’s not it. The erection of institutions with the power and infrastructure to enforce a rule of law with the good of as many as possible at heart? Not much evidence for that panning out.

What I recommend is this: we return to the Vedic cycle and submit ourselves to the likelihood that many of us will end up getting eaten by bears. It’s only natural. What if instead of imbuing our expectations for the quality of our lives to include perpetual happiness, dream ful?llment, excessive painlessness, existential certitude, material wealth, and all variety of romantic stimulation, we were just grateful for every day that didn’t involve getting eaten by a bear? What if progress only meant literally progressing from one day to the next without getting violently dismembered by a 9-foot tall, 500-pound grizzly?

The irony here of course is that many more humans than we’d like to think, most of whom are not reading the interminable liner notes to a folk rock album, do live in daily, perpetual fear of getting killed by a mammal far more terrifying than a bear, and I think you know the one to which I refer. This form of mammal attack is made all the more nightmarish by virtue of the fact that the mammal in question kills purely ideologically. Bears kill because they’re hungry; they’re very reasonable in that way. So maybe we should submit ourselves to their authority. Bears we can trust.

Bottom line is that as long as we expect to live in such a way – immune to the natural laws of this godless rock that govern everything else here – human existence will continue to be a cruel joke. I fear, however, that it is too late for us to go back into the natural order. We have no desire to return to our primal scene. We like the way things are. We’ve got sandwiches when we’re hungry! Airplanes for when we want to go somewhere! Social media when we want our voices to be heard by all God’s creation! We know that these magical conveniences come at a staggering price, and that excess for the few is based on the scarcity of the many, but that’s why we invented the business of globalization! We’ve already built the wall! It’s a great, great wall that goes up to the heavens and is as transparent as museum glass. It’s a beautiful wall that winds surgically through nations, cities, neighborhoods, and sometimes even homes. It is a globe within a globe, and those who live within its interior are as clueless as to what’s happening on the other side as we are to what’s happening right now on the far side of Mars.

The joke is that the best we can do is keep on keeping on, which we’ve proven ourselves pathologically adept at. We’re going to save the planet alright, and it will be a glorious sacri?ce just like the Sky-Man we invented showed us how.