Faced With the Americans Who Could Lose Everything Under Trump, Paul Ryan Dabs on ‘Em 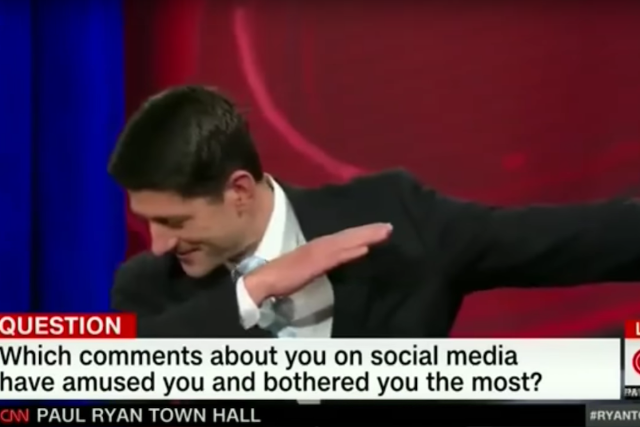 Last night, champion bodybuilder Paul Ryan held a “town hall” special on CNN, fielding questions from ordinary people about his plans as Speaker of the House under President Donald Trump. Confronted with the potential human toll of Trump’s demagoguery and his own radical austerity, Ryan smiled like a nice guy, rambled on disingenuously about how immigrants and people in poor health have nothing to worry about, and glibly criticized some innocent teen’s dabbing technique. We knew it before, but I’ll say it again: My fellow Americans, we’re totally fucked.

At one point in the town hall, Ryan was questioned by Angelica Villalobos, a mother who was brought to the U.S. as an undocumented immigrant at age 11, and gave birth to her daughter in the states. That makes Villalobos’s daughter a U.S. citizen, but not Villalobos herself. However, under DACA and DAPA, two executive orders enacted by Barack Obama, adult undocumented immigrants brought to the U.S. as children as well as undocumented parents of citizens were given limited protections from deportation. But the Supreme Court struck down DAPA last year, and Trump has announced his intention to repeal DACA when he takes office. All of this will greatly imperil Villalobos’s ability to raise her daughter in the U.S., which prompted her to ask Ryan point-blank: Do you think I should be deported?

“I can see that you love your daughter. You’re a nice person who has a great future ahead of you, and I hope your future is here,” Ryan answered, which is meaningless, even though, or especially because, it sounds nice. CNN’s Jake Tapper, who moderated the town hall, politely called him on his bullshit. “If president-elect Trump wants to undo DACA, you would tell him don’t do it?” Tapper asked. Ryan dodged the question, saying that Congress needs to come up with a “good, humane solution” for DACA recipients. “A good, humane solution” is not an actual policy prescription, and the sad fact of the matter is that under a Trump administration, people like Villalobos will either be deported or spend a lot of time in hiding. And despite his sympathetic act, Ryan has been a staunch opponent of Obama’s immigration executive orders since long before Trump arrived on the scene. At least Ted Cruz had the balls to be honest when he got a similar question from a DACA recipient on the campaign trail last year.

The other big moment came when Jeff Jeans, a small business owner from Arizona, confronted Ryan on the Affordable Care Act. Jeans was a lifelong Republican voter, he said, but jumped ship when he was diagnosed with cancer without any health insurance, learning he’d have only weeks to live in the absence of treatment. As an independent businessperson and whose cancer would have counted as a preexisting condition, Jeans was able to purchase insurance and get treatment only under the provisions of ACA. “Why would you repeal the Affordable Care Act without a replacement?” Jeans asked. “I want to thank President Obama from the president of my heart, because I would be dead if it weren’t for him,” he added.

Again, Ryan smiled and pretended that he and the rest of Congress weren’t already working to dismantle the benefits that saved Jeans’s life. “Do we want to make sure that a person like yourself, with a preexisting condition, gets affordable care?” Ryan asked rhetorically. “Of course. Of course.”

On the contrary, back in April, Ryan called specifically for the elimination of the ACA’s provision guaranteeing coverage to people with preexisting conditions. His preferred method for covering these people involves the use of “high-risk pools,” which offer plans, subsidized by state governments, to those with preexisting conditions. This theoretically reduces the burden of payment for everyone without a condition who gets their insurance on the private market, but there is one problem: high-risk pools have been in place in plenty of states for a long time, and we already know they don’t work. Even with subsidies, the premiums are still so high that many people can’t afford them, and vast swaths of people with conditions remain uninsured and unable to pay for their doctors and medicine. Obamacare isn’t perfect, but repealing it would be infinitely worse.

After happily detailing his and the president-elect’s plans to tear mothers away from their children and strip millions of people from their access to affordable insurance, Ryan was asked about his relationship with social media and the internet. “You know, I actually do know what a dab is, just for the record,” he said, making reference to the teenaged son of a congressman who dabbed during a swearing-in ceremony earlier this month. Then, Ryan had the audacity to hate on the kid’s moves. “It looked like he was sneezing,” he said. “That’s not dabbing, in my opinion.” Judge for yourself below. Personally, I’d take the Good Teen all day.