Actually, Donald Trump Should Divide Us

This morning Shia LaBeouf joined many other artists in rebuking Donald Trump’s inauguration by launching a new livestreaming project that he plans to run throughout the Trump presidency. The project is titled “HE WILL NOT DIVIDE US,” and it asks people to repeat that phrase in front of a camera mounted on a wall outside the Museum of the Modern Image in New York, which will purportedly be on and live for 24 hours per day, seven days per week, for the next four years. At the moment, you can watch Jaden Smith and friends chanting the mantra at the project’s website hewillnotdivide.us, which also features a manifesto of sorts that reads:

Commencing at 9am on January 20, 2017, the day of the inauguration of the 45th President of the United States, the public is invited to deliver the words “HE WILL NOT DIVIDE US” into a camera mounted on a wall outside the Museum of the Moving Image, New York, repeating the phrase as many times, and for as long as they wish.

Open to all, 24 hours a day, seven days a week, the participatory performance will be live-streamed continuously for four years, or the duration of the presidency. In this way, the mantra “HE WILL NOT DIVIDE US” acts as a show of resistance or insistence, opposition or optimism, guided by the spirit of each individual participant and the community.

God bless the hearts of our spiritually pure and wide-eyed young celebrities, but this is complete nonsense. The election of Donald Trump was an inherently divisive act. This was true not just during the campaign season and on election night, but it will be true moving forward. It will be borne out by the livestream itself, which we can safely assume will be populated by hundreds of thousands, if not millions, of Americans who did not vote for Donald Trump. The only people this project will bring together are those who are already largely linked together literally, ideologically, and politically. 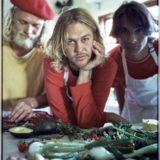 But more to the point, this is an especially feeble act of resistance because an active and effective populace in the Trump era should want to be divided from those who support the ideological framework he plans to, and will, implement. It should want to be divided from the ghouls he has, and will, lean on to turn that framework into policy, and those who did, and will, vote some of those ghouls into office. Those policies will make the lives of millions of people—especially those not protected by the wealth of celebrity, nor those who can afford to travel to the Museum of the Modern Image—worse, and dangerously so. Under the Trump administration and the Republican Congress it was ushered in with, America will lose its land to pillagers. The lifespan of the free world will be sawed off. People will be shipped off, their lives erased. Others will die, directly and indirectly, immediately and in the future.

In no way is any of this worth uniting under, or for, at any point. Love—a celebrity’s preferred weapon of protest—will not Trump hate. Any informed citizen who supports Donald Trump and his policies should be no comrade of mine, or yours, or Shia LaBeouf, or Jaden Smith. We should want to stand apart from those people, and defeating Trump in four years will require making that division, and the reasons for it, very clear. “Us” is on hold.