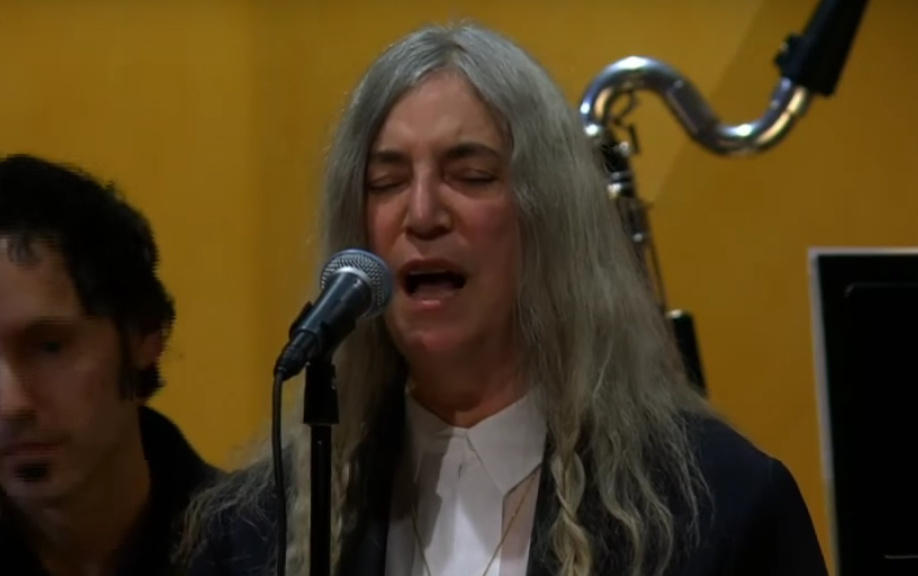 The drama of Bob Dylan’s will-he-or-won’t-he Nobel Prize for literature reached some kind of conclusion yesterday, as the ceremony went down with Patti Smith performing in his stead. Though Dylan wasn’t present, he provided the Nobel committee a statement to be read at the Stockholm gathering, on his behalf.

Hardly the next best thing, Smith took Dylan’s “A Hard Rain’s A-Gonna Fall” to desperate emotional depths, with the backing of a small ensemble of mostly pedal steel and strings. Amidst dignitaries and royalty, Smith sings of Dylan’s empty diamond highways, of dead oceans, of boys and girls marred by violence and strife. The lyrics of the 1962 song resonate particularly strongly today, as the visions in Dylan’s classic could be describing a bleak CNN broadcast.

Smith slipped up a little bit, blanking on a few of the words and apologizing for being nervous. The moment is so honest, however, and the lyric she slips up on so dark– “I saw a black branch with blood that kept drippin”–one can hardly begrudge her the enormity of the occasion.

Ironically, Dylan’s prepared remarks comment on the small size of the Nobel committee, and the greater difficulty of performing to fewer people:

“But there’s one thing I must say. As a performer I’ve played for 50,000 people and I’ve played for 50 people and I can tell you that it is harder to play for 50 people. 50,000 people have a singular persona, not so with 50. Each person has an individual, separate identity, a world unto themselves. They can perceive things more clearly. Your honesty and how it relates to the depth of your talent is tried. The fact that the Nobel committee is so small is not lost on me.”