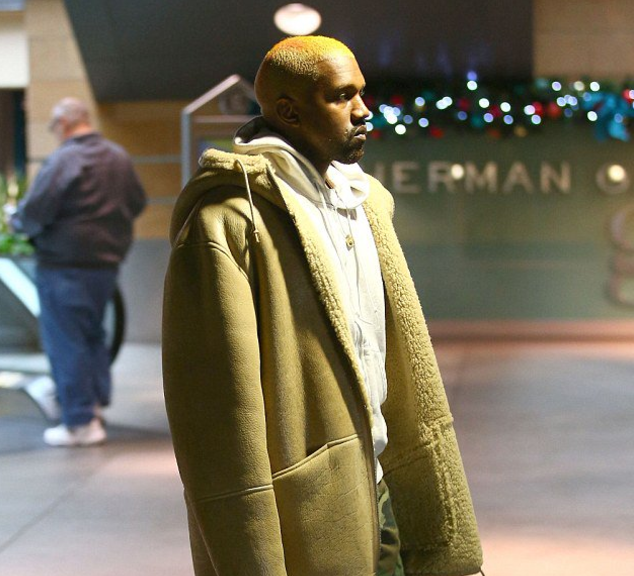 Numerous media outlets have reported on Kanye West’s new rainbow-ice-cream-colored hairstyle, unveiled during a trip to the movie theater in Hollywood on December 26. What has not been reported is what movie West was seeing that night, and why, exactly, he took in three movies (two of them alone) at different branches of Los Angeles’s Arclight theater chain in less than a week.

Kanye’s first of three known film excursions in the last week was to a showing of Rogue One, as the Daily Mail reported, on December 21. While some outlets reported it as a dejected solo outing, Us Weekly posted a photo of Cory Gamble, Kris Jenner’s boyfriend entering the Westlake Village Arclight behind Kanye.

This weird Twitter account also alleges that Kid Cudi is in the background of this picture, without offering any other support for the claim:

Then, on Christmas Eve—following a trip with Kim and North to see The Nutcracker at the Los Angeles Ballet the previous night—Kanye was spotted outside a different branch of The Arclight (in the Sherman Oaks Galleria) sporting a vintage “Free OJ” shirt:

The paparazzi didn’t report on what Kanye saw on the night before Christmas, but an IGN editor had the answer:

Friend of mine took her niece to see Moana at the Sherman Oaks Arclight and Kanye West was sitting in their (reserved) seats. Classic Kanye.

This choice of flick holds up to reason: Kanye has gone on record as a fan of animated films, and by his own account, entered into now-stalled talks with Disney earlier this year about forming his own production company. (I won’t comment on the reserved seats rumor.) Perhaps North had seen the film on his own, and delivered a rave review to her father.

As for yesterday’s trip to the Hollywood Arclight, there’s not a clear indication of what Kanye might have taken in. After all, Allied is no longer playing there:

Robert Zemeckis is a truly inventive filmmaker and captivating storyteller. He is one of my favorite directors of all time.

According to the theater’s listings, Kanye could have seen the following films: A Monster Calls, Sing, Assassin’s Creed, Fences, La La Land, Passengers, the newly-opened Hidden Figures, Patriots Day, Martin Scorsese’s Silence, or Ben Affleck’s silly gangster movie Live By Night. (This is discounting the non-trivial possibility that he might have seen Rogue One again.) One potential guess is that he was seeing Assassin’s Creed, the widely-panned Michael Fassbender-starring video game adaptation, since it featured Yeezus’s “I Am A God” in one of its roided-out trailers.

Despite The Nutcracker trip, tabloids have tied these cinema jaunts to rumors of Kanye and Kim’s impending divorce; He did, after all, opt to see Moana as the Kardashian and Jenner family’s huge Christmas Eve party was going on. (Page Six reports he eventually attended.) But perhaps Kanye, like many other human beings in the world, just likes to hide from his family during the holidays by watching movies.

If you have any information about what film Kanye saw in Hollywood on December 26, please send it to [email protected]