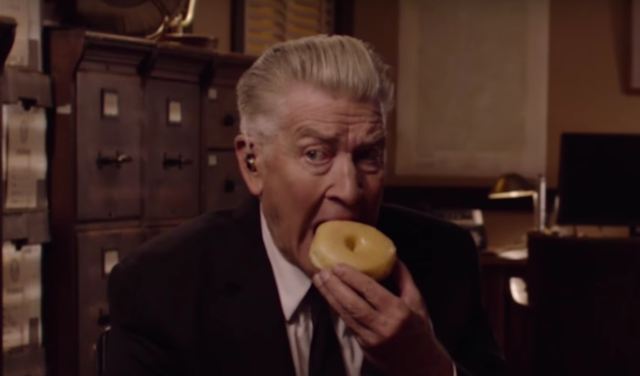 Another day, another new Twin Peaks teaser—but still no release date for the show’s revival. Still, Showtime’s latest promotional clip is a bit more exciting than the past cryptic montages and interview segments. It features footage of David Lynch, hearing aid in ear, ravenously chowing down on a donut, as a loose, slightly off-kilter take on the show’s main theme plays in the background. The revelation here, as the video’s caption explains, is that Lynch, the writer, director and creator of the iconic series, will be reprising his sporadic side role of Gordon Cole, Dale Cooper’s nearly-deaf, bellowing superior in the FBI.

Fan site Welcome to Twin Peaks notes that the clip comes exactly a year after the first proper teaser was posted. Maybe something, maybe nothing.

Showtime’s impending continuation of the former ABC show, now almost 26 years dormant, is set to feature a gigantic ensemble cast, featuring most of the series’ old regulars as well as new additions, including Laura Dern, Amanda Seyfried, Tim Roth, Matthew Lillard, and Trent Reznor. David Lynch directed and co-wrote all the episodes, along with the show’s original co-creator Mark Frost.

Watch the new clip below.