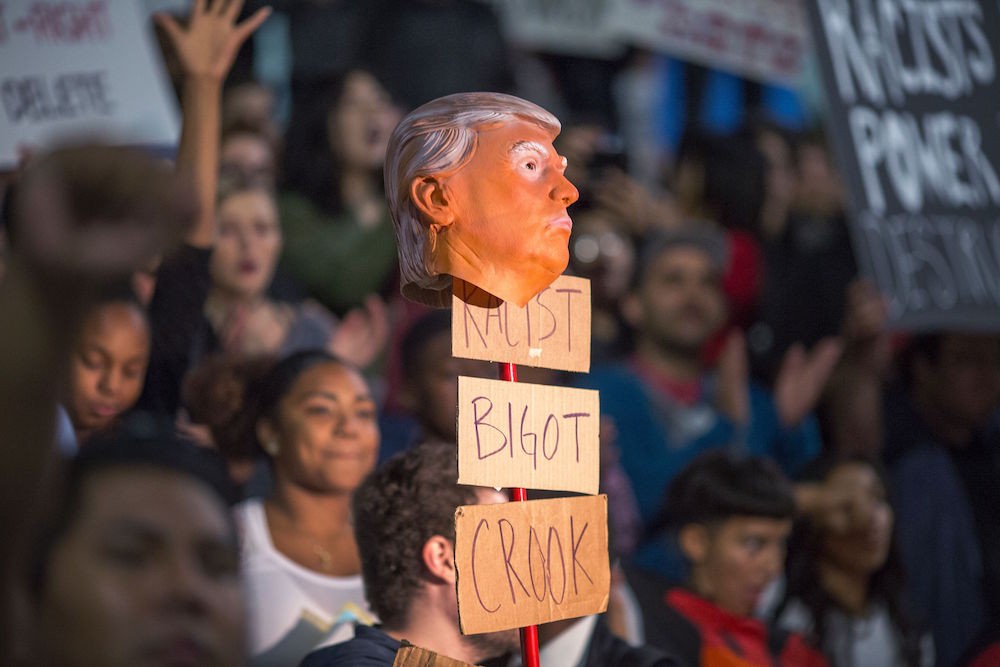 Over the last week, multiple protests against president-elect Donald Trump have been held in cities across the United States. Generally speaking, the protests haven’t gotten out of hand—they’ve disrupted some commutes, as well as some business hours for stores in areas where people are meeting, but all of this is pretty standard. Regardless, Washington state senator Doug Ericksen has come up with a new idea to combat the inconvenience of tolerating these gatherings: Why not just criminalize them altogether?

A new bill he’s proposed makes it seem like he isn’t in favor of banning all protests–just ones that interrupt the flow of capitalism. The bill seeks to criminalize “illegal protests aimed at causing economic damage” and “unlawful disruption of transportation and commerce,” wording that’s just vague enough to shackle the anti-Trump protests. Worse, it would also hit organizers and funders with extreme economic fines. (This means you could theoretically get hit for starting a Facebook event aimed at getting people to show up.) Specifically, Ericksen referred to such protests as “acts of terrorism,” which is… an interesting way to put it.

ACLU spokesman Doug Honig summed up the problem with all of this in a statement:

The statement throws out a lot of broad rhetoric, and we’ll need to see an actual bill. But we’re already concerned that some of its loose terms appear to be targeting civil disobedience as ‘terrorism.’ That’s the kind of excessive approach to peaceful protest that our country and state do not need. “Let’s keep in mind that civil rights protesters who sat down at lunch counters could be seen as ‘disrupting business’ and ‘obstructing economic activity,’ and their courageous actions were opposed by segregationists as trying to ‘coerce business and government.

The right to protest isn’t explicitly guaranteed in the Constitution—it’s generally enforced by an interpretation of the First Amendment, which states that people have the right to peaceably assemble. These anti-Trump protests have been largely peaceful. There have been arrests for disorderly conduct, as well as resisting arrest, but getting thousands of people in the same place won’t ever go smoothly no matter how noble their goals are. (Check out a football game, if you disagree.) That’s not even accounting for cops looking for an excuse to whip out their handcuffs, or your garden variety dipshit just trying to cause a damn stink.

Of course, there have been hiccups. One night during a series of Portland protests from last week was declared by police to be a riot, with an alleged $1 million in property damage taking place. 112 people were arrested during those series of protests, and KGW reported that a chunk of them either didn’t vote, or weren’t registered to vote in the state. They might have been registered elsewhere, but who knows—KGW essentially threw its hands up at trying to figure it out, and the comments tilted heavily toward the emergent narrative that all protesters are just lazy, shifty good-for-nothings who are probably being paid by George Soros and abortionists.

Hence the enduring myth of the “professional protester,” that apocryphal citizen paid thousands of dollars to cause a riot. Certainly, there are some lone agitators trying to whip up trouble, because “lone agitators trying to whip up trouble” comprise a tiny baseline of the population to begin with, but to paint the protesters with such a broad stroke is obviously goofy. You might wonder if they’ve ever been to these events–most of the people who show up are just concerned citizens trying to show their voice, because really, nobody has the time or money to pay thousands of people to march en masse. Civic responsibility still inspires people to action, you know.

But bills like Ericksen’s still feel like little salvos in this post-Trump world, especially when considering that Ericksen was Trump’s deputy campaign director in Washington. It doesn’t matter if his bill passes—it probably won’t, given the makeup of Washington’s legislature—but it matters that the language is out there, influencing website commenters whose read on how violent these protesters might be is largely false. When people warn against normalization in the Trump era, this is what they mean—the idea that you can brand a bunch of citizens exercising their Constitutional right to organize as terrorists, simply because you don’t agree with their cause.

There are many ways to voice dissent—calling your Congressman is a great one—but the notion of peacefully organizing in public is more important than ever.