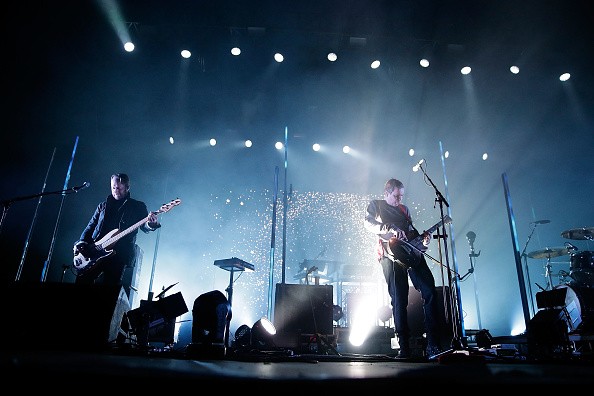 Picture the Sigur Rós fan standing at their concert, transfixed by the orchestral arrangements, lofty melodies, vast instrumentals and crescendos. Their style of post-rock is often associated with beauty, that vague yet powerful feeling, leaving these fans brimming with awed, weepy feelings for more than 20 years. But the band has undergone some changes in recent years: Multi-instrumentalist Kjartan Sveinsson left the group in 2013, causing them to write their seventh record, Kveikur, as a three-piece band. The album largely shirked the use of strings and brass in favor of vicious, demonic guitars and crashing percussion, resulting in their most intense and heavy album since 2002’s ( ).

Recent activity showed them casting away classical instruments altogether. Their newest single, “Óveður,” which came out in June, was harsher than anything they’ve released. No more gushing violins, no more triumphantly blaring horns. It continued the darker themes that filled Kveikur by further stepping away from the musical signifiers that previously made their music “beautiful,” and showed them easing into a new sound that flips the traditional notion of musical beauty altogether.

More succinctly, “Óveður” isn’t post-rock. Explosive gunpowder beats offset a droning, downtrodden melody; Jónsi Birgisson’s voice is mournful and anguished. It’s as if he’s standing among the ashes of a once-flourishing city, lamenting its untimely destruction. A rough translation of the lyrics convey a sense of existential misery: “A useless life this is / Cry alone / Unseen…Looking all around / Where should I do? / Don’t know where to put my foot down / Wherever I go stuck again on earth.” It’s beautiful, but in the way that a devastated landscape might evoke a sense of awe and wonder, along with the despair.

Earlier this year, the group shared a video project called “Route One,” a day-length live-stream broadcast of a drive down Iceland’s coastal ring road. Paired with an algorithmically generated remix of “Óveður,” the video depicted the sprawling, gorgeous scenery of Iceland. The road wound its way through expansive greenery with storms gathering in the distance, and passed through desolate marshes, meadows and headlands. The route was bereft of skyscrapers and people. An odd juxtaposition took place between the spectral music and the captivating landscapes—a void revealed underneath such hypnotizing beauty.

Beauty is an amorphous construct beholden to an individual’s perspective, more tied to cultural and societal norms than any feigned notion of objectivity. So what happens when beauty is the ultimate end-goal of a musical composition? Is it anything but a fatuous ask, to want to overwhelm the listener with those quivering feels? The question hangs over the recent work of Sveinsson, the ex-band member who left in 2013. This year, Sveinsson wrote the score for a four-act opera, Der Klang der Offenbarung des Göttlichen, which was released today. In a press release, Sveinsson said “Der Klang der Offenbarung des Göttlichen is a banally romantic opera inspired by Halldór Laxness’s cunning texts about the longing for beauty.”

The score is, as Sveinsson indicates, banal in its beauty. It overflows with strings. A choir sings elegiacally. While it is an emotive listen, the score takes the conventional notion of beauty to an extreme, to the point where there is little substance besides it. It is the musical opposite of “Óveður,” which is beautiful in its bleakness. Der Klang der Offenbarung des Göttlichen, on the other hand, sounds so pretty that it is almost hollow. This may have been Sveinsson’s point. According to an interview with the New York Times, he said he was inspired by World Light, a novel by Icelandic Nobel laureate Halldor Laxness, in which a poet is on a life-long, useless search for beauty.

Recently, I was able to see Sigur Rós play a sold out show at New York City’s Radio City Music Hall. The tour was atypical, because instead of hauling an ensemble around with them across the world—the 2013 tour behind Kveikur featured an eleven-piece band—the group eschewed classical instruments altogether. No auxiliary musicians shared the stage with them; it was only lead vocalist and guitarist Jónsi Birgisson, Georg Holm on bass guitar and keyboards, and Orri Páll Dýrason on percussion and keyboards.

The group hired musical director Paul Corley to help them accommodate their arrangements for a three-man set-up, and the result was a heavier, more rugged sounding Sigur Ros. They played off of the recently re-issued ( ) for most of the concert’s first half, and ran through some of their other highlights—“Festival,” “Sæglópur,” “Ný batterí,” the rarely-performed “Starálfur.” In their new context, these old favorites sounded bold and violent. “Festival” was less garish and more forceful without its usual orchestral decoration; “Starálfur,” which is typically anchored by a gorgeous string melody, was jarring in its bareness.

Stripped of violins and brass, percussion revealed itself to be the backbone of Sigur Rós’ music. It was a different sort of beauty, rougher and more devastating. It made their associated brand of gorgeousness seem almost banal, unintentionally proving Sveinsson’s point. They didn’t need a big orchestra on stage in order to create a moving experience, it turned out. When the last note of “Popplagið” rang throughout Radio City Music Hall, almost everyone in the audience was standing in front of their seats. They wanted an encore, but Sigur Rós were done for the night.