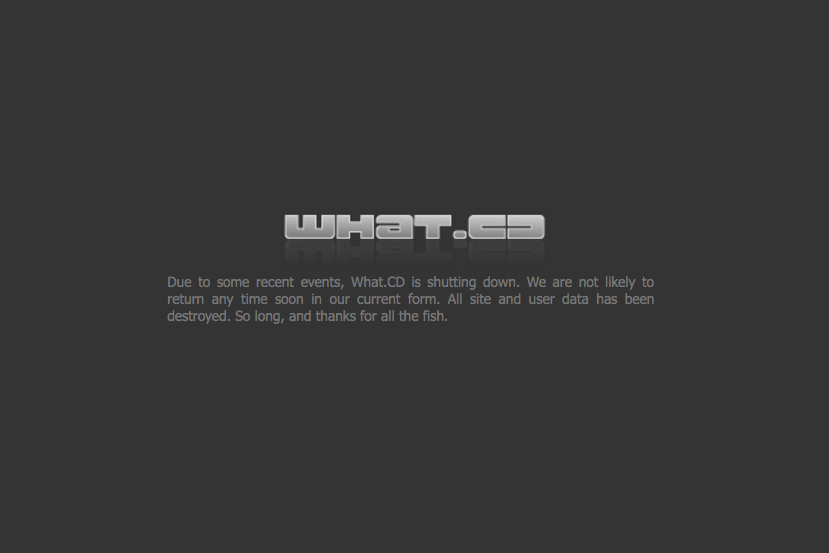 What.cd, the invite-only music torrenting site known for its vast catalogue of (mostly illegally ripped) music, is no more. The Verge reports that its demise follows a cybercrime raid by French police, who reportedly seized its servers.

What.cd opened in 2007, the successor to another shuttered torrent site, Oink. For internet music hounds and audiophiles willing to break piracy laws, its invitations were coveted tickets to a massive collection of torrents, many in high-quality lossless file formats—”the Library of Alexandria for music,” as one Reddit user poetically put it. Ever wanted to compare a classic vinyl record to its remastered CD reissue, in FLAC, for free, without leaving the couch? Fill out a complete digital collection of every release from a tiny, defunct indie label? Download the entire discography of an artist so obscure that the English-language internet might offer little to no other information about them? What.cd could come through.

With its hyper-dedicated user base, the site also served as a kind of nerve center for underground music fandom. Its request section, which offered data “bounties” to uploaders of in-demand content, created a quantified ranking of sought-after music. (The first person to pirate the Avalanches’ long-awaited sophomore record was rumored to have nabbed 1.88 terrabytes’ worth of downloads that didn’t have to be offset with corresponding uploads.) Its recommendations and user-created collections made your Spotify Discover Weekly playlist look like Now That’s What I Call Music!

The real marvel is that What.cd lasted as long as it did. Operating in Europe probably helped, as did administrators’ dedication to security and the Fight Club-esque secrecy surrounding the whole operation. In our current heyday of all-you-can-eat music streaming, What.cd’s services feel less essential than they once did. But on the other hand: Imagine a world where Neil Young isn’t on again/off again, you don’t have to pay Apple Inc. for access to Frank Ocean, there’s never any Prince drama, and if you didn’t find something you loved, you could upload it yourself. Nobody was getting paid, which was its own problem, but some of this music was largely unavailable by legal means, and shared out of genuine curiosity in exploring the work.