Recent reports (most notably, from BusinessWeek) indicate that the Trump campaign has been openly discussing and developing voter suppression tactics, and with or without their help, it’s a very real thing. Now, appropriately, The New York Times has released an op-ed in the form of a computer game as a counterpart to these disheartening stories—and to centuries of institutionalized discrimination during American elections.

“The Voter Suppression Trail” is a nostalgic nod to popular grade-school computer game The Oregon Trail, complete with a soundtrack of 8-bit blip sound effects and renditions of patriotic songs. You can play as one of three players: 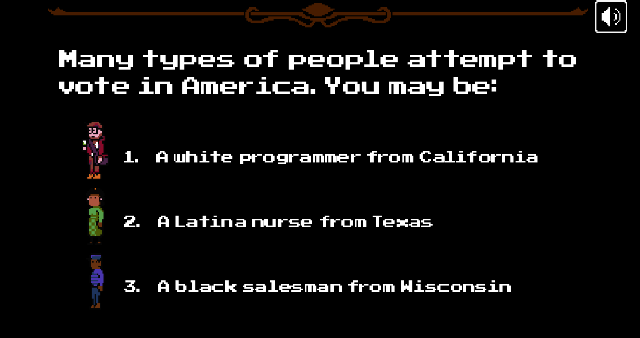 Selecting the white programmer, of course, results in a very short level; all you need to do is click through, and your bearded, shoulder-bag-armed avatar can cast his vote for his candidate of choice. “You waited 1 minutes. You became enraged 0 times,” an end screen reads, with a logo for “The GOP Arcade.” 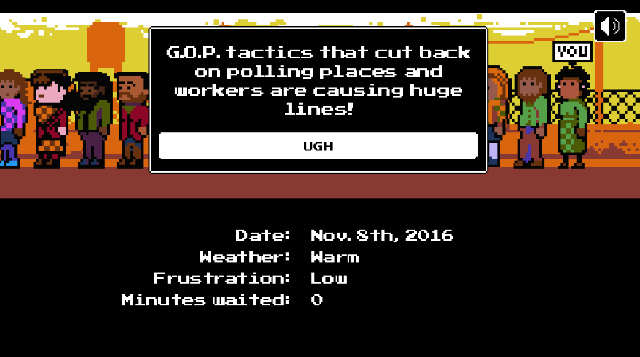 If you play as the Texan Latina nurse, or the midwestern black salesman, well, things become a bit thornier. Gamers, you’ll want to try these levels for a challenge! You’ll have to struggle to find a polling place, deal with harrowing life choices while waiting in a long, halting line for an hour and a half, and then finally dodge thugs hanging around the voting booths attempting to scare you away. If you don’t have the adequate forms of ID, then things might not turn out so well for you: 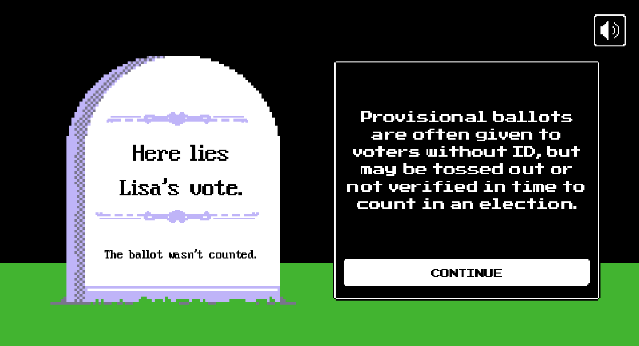 It’s the darkest humor possible to complement the darkest American election in recent memory. Give it a spin at the New York Times website, and maybe pour yourself a stiff drink.