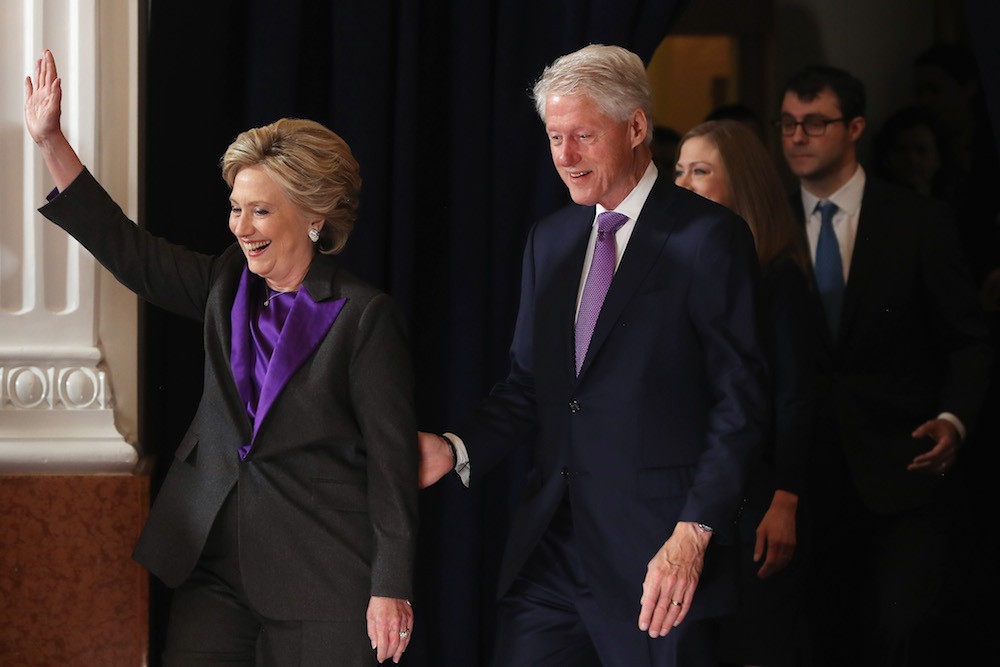 In a concession speech in New York Wednesday morning, following her shocking loss to Donald Trump in the 2016 presidential election, Hillary Clinton stressed the importance of accepting the results of the vote, while urging her followers to continue fighting for liberal values.

“Donald Trump is going to be our president. We owe him an open mind and the chance to lead,” Clinton said, flanked by her husband Bill Clinton and running mate Tim Kaine. “The U.S. Constitution enshrines the peaceful transfer of power from one president to another, she added, “and we must cherish that.”

The lines recalled Donald Trump’s public refusal, earlier in the campaign, to affirm that he would accept the results of the election if he were to lose. “Nobody had to wonder whether Hillary Clinton would accept the outcome of an election in our beautiful Democracy,” Kaine said while introducing Clinton during her speech at the Wyndham New Yorker Hotel. Watch Clinton’s and Kaine’s speeches below.

Clinton congratulated Trump on his victory, and said that she had offered to work together with him in the interest of bettering the country. However, she added, in addition to cherishing the peaceful transfer of power, Americans must cherish and defend freedom of expression, freedom of religion, and equal rights for all people. The implication was clear: these are values that Trump, in his attacks on Mexicans, Muslims, women, and the media, had called into question during his campaign.

Clinton also took a moment to address young women supporters. “I want you to know that nothing has made me prouder than to be your champion,” she said. “I know we have still not shattered that highest and hardest glass ceiling, but someday someone will—and hopefully sooner than we might think right now.”

The message, from both Clinton and Kaine, was that Democrats must accept the loss, move forward, and continue to fight for their values. “This loss hurts, but please never stop believing that fighting for what’s right is worth it,” Clinton said.

Kaine, quoting from William Faulkner, put the sentiment in more down-home terms: “They killed us, but they ain’t whooped us yet.”