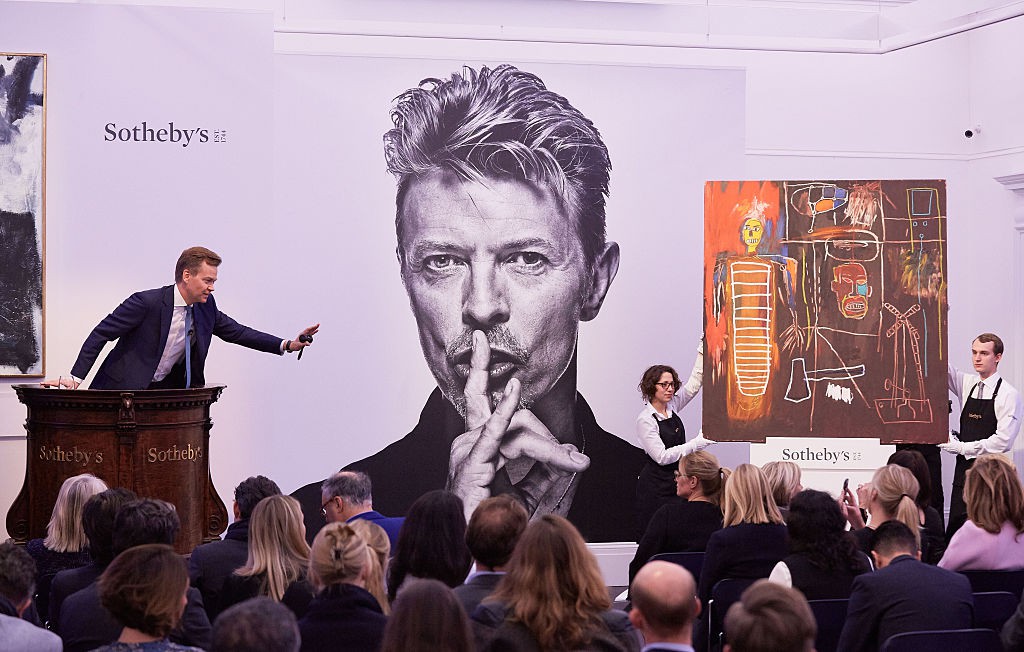 A portion of David Bowie’s personal collection of fine art and design pieces has grossed $41.1 million at auction, Sotheby’s announced. The art collection sold for $30.2 million on Thursday, and the design collection for an additional $10.8 million on Friday, breaking pre-sale high estimates.

According to the auction house, the two-day sale set new price records for 56 artists. Jean-Michel Basquiat’s 1984 painting Air Power (pictured above), the sale’s highest profile and most expensive lot, sold for $8.8 million. ArtNet reports that the oldest piece in Bowie’s collection, a 16th-century painting of St. Catherine of Alexandria, is on its way to the Rubenshuis museum in Antwerp, Belgium.

The works sold represent about 65 percent of Bowie’s total collection. The rest will remain with his family and estate. Below, watch the New York Times’ behind-the-scenes video of the auction and admire a few pieces from the sale, including a fantastic-looking record player console designed by brothers Achille and Pier Giacomo Castiglioni and a mod set of salt and pepper shakers by Ettore Sottsass.

Most valuable work sold so far today: Heckel’s £257,000 self-portrait, one of the foremost images of German Expressionism. #BowieCollector pic.twitter.com/qTTaGwTEFG

#AuctionUpdate Designed as a ‘musical pet’, this #Brionvega record player owned by David Bowie has just sold for £257,000 #BowieCollector pic.twitter.com/SoBCWSgFq9

#AuctionUpdate The salt & pepper shakers that David Bowie owned before he sought out work by #Sottsass have just sold in London for £7,500 pic.twitter.com/iyEBhh0M39