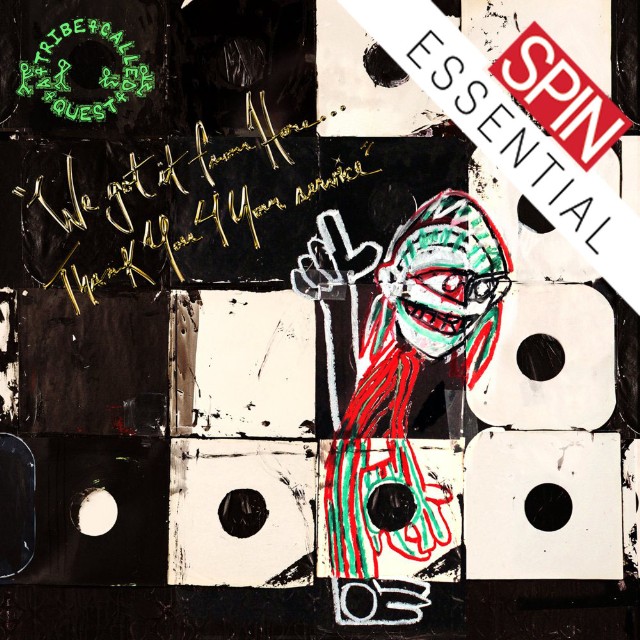 In the ‘80s, jazz finally went legitimate. Once considered a lesser means of expression due to America’s adulation of Eurocentric culture, the African-American tradition became high art dissected by academics, a garment worn by the upper-middle class. The Cosby Show, formerly the prototypical standard for the successful black family, had a jazz-inflected theme song. Ascendent trumpeter Wynton Marsalis brought a classicist approach to the form while insisting it was music for the cultured. Jazz was even classy enough to become an Yves Saint Laurent fragrance.

Hence the importance of A Tribe Called Quest’s emergence didn’t just lie in their blend of black art—rap and jazz, future and past—but in their impeccable timing. They reinstated jazz as an accessible language for a new generation, as they used it to chase hip-hop’s greatest McGuffin: the Realness. Q-Tip, distancing himself from MC Hammer-esque acts, famously decreed on “Check the Rhime” that “rap was not pop, if you call it that then stop”; on “Jazz (We’ve Got),” Phife Dawg fortified himself within “strictly hardcore tracks, not a new jack swing.” Sampling their jazz heroes, and even recording with them when possible, they combined acoustic instrumentation with drum machines to offer a vision where unity and individual expression weren’t exclusive pathways, but one in the same.

Wide-eyed yet assured, A Tribe Called Quest created music that reflected their namesake. Love, hate, the quotidian struggle, and subsequent jubilation were encapsulated within those interwoven grooves. The coupling of Q-Tip’s nasal malleability and Phife Dawg’s raspy pugilism in that immortal back-and-forth (“You on point, Tip? All the time, Phife”) within the beat’s swing was a revelation and reminder that black art’s beauty could be found in abundance and interconnectivity, not just a towering genius. Their fluidity was alchemic, an act of kismet that glided through some of the undiscovered pathways sought by jazz legends like Miles and Coltrane.

Today, hip-hop’s squabbling is related less to sound than age. Melody-focused millennials impishly needle at fortysomething OGs, who grumble over lack of lyricism and familiarity with the genre’s forebears. But the culture hadn’t shifted so much that the loss of Phife Dawg didn’t resonate as a massive, shocking event—a pioneer taken far too early. The death was an unexpected blow as the disassembled Tribe was in the process of completing We Got It from Here… Thank You 4 Your Service, their final album and first since 1998’s The Love Movement, which had been in the works since late 2015.

We Got It from Here could’ve been a self-referential nostalgia piece, a militant call to arms, or a Tribe and Friends-style fame flex, but it transcends such shallow concerns. Despite having every reason to showcase the Tribe raging against some culture-bastardizing, it stands against the same systemic cruelties that have informed many works of the hip-hop canon. This is a protest-minded project with a titanic belief in unity—a revelation coming this far after their heyday, in a world that feels just as scary for marginalized folks as the Reagan years they came up in.

On the opener “The Space Program,” Jarobi White and Q-Tip adroitly trade lines without missing a step, as though Jarobi hadn’t been absent since the group’s 1990 debut. The track’s black humor, built around the idea that there’s no space for black people—not even in outer space—gives way to a powerful coda that builds upon repetition, set against an intertwining groove of acoustic bass, drum patterns, and minor chord guitar. Phife Dawg repeats “Gotta get it together”—a phrase referencing Beastie Boys and Q-Tip’s relay from 1994’s Ill Communication—on end, his words becomes a healing talisman.

Recorded in Q-Tip’s New Jersey recording studio, the physical confluence of everyone’s ideas results in some of the album’s finest moments. (Only Elton John and Kanye West, who provides the mournful hook on “The Killing Season,” were allowed to contribute from outside the studio.) “Dis Generation” eschews verse-for-verse structure as Q-Tip, Phife Dawg, Jarobi, and Busta Rhymes weave through each other like rice and peas in a blender. “Solid Wall of Sound” features the same euphoric effect, with Phife’s Caribbean patois serving as the poignant catalyst. As great as the individual performances are, there’s a greater awe in listening to that telepathic fluidity.

Though jazz is no longer the obvious musical reference point, We Got It from Here draws similar inspiration from the legacy of black art. The record was produced entirely by Q-Tip, who created a polychromatic atmosphere molding day-glo neo-soul (“Conrad Tokyo”), ‘70s Jamaica (“Whatever Will Be”), and psychedelic studio exhibitionism (“Solid Wall of Sound,” which gets a boost from Elton John’s regality on the outro). While rooted in tradition, the sound is accessible enough to allow Tribe’s progeny to shine—Kendrick Lamar’s staccato-delivered righteousness on “Conrad Tokyo,” Anderson .Paak’s stirring soul on “Movin’ Backwards.”

It’s fitting for a final album functioning as a tidy baton pass to the new wave. The generation gap gets poked at with empathy in “Kids,” a duet between Q-Tip and Andre 3000, in which 3 Stacks points out the hypocrisy in worrying about the young’uns: “Fuck it, kids, the grown-ups won’t own up / They stood on the corner / Like you once upon a / time.” There are bigger problems: “We the People…” links “She Watch Channel Zero?!”-style admonishments with Q-Tip’s bleak invocation of Trump World’s anxieties about Americans of color. But the fun can’t be forgotten, either. On “Mobius,” Busta Rhymes breaks from rapping to cackle in an inclusive moment that alludes to decades of Native Tongues-affiliated camaraderie. It’s the most joyful he’s sounded in years.

While Jarobi and Q-Tip have made it clear in interviews that they’re still in mourning, We Got It from Here ends with a celebratory tribute. “The Donald,” which refers to Phife Dawg’s moniker Don Juice, concludes with a repetitious call-and-response that reads like an exultant funereal procession. The finality of death doesn’t override the joy of a fulfilled life. That’s part of the reason We Got It from Here feels like less of a bittersweet moment than a gift. A Tribe Called Quest worked with the understanding that black music at its finest conversed with ancestry while pointing toward future possibilities in resistance against the racist forces that run parallel. Even as their art reached for immortality, they expressed humanity, and situated themselves as iridescent dots in an ongoing cultural continuum. The group ends, but the journey continues—same as it’s always been.