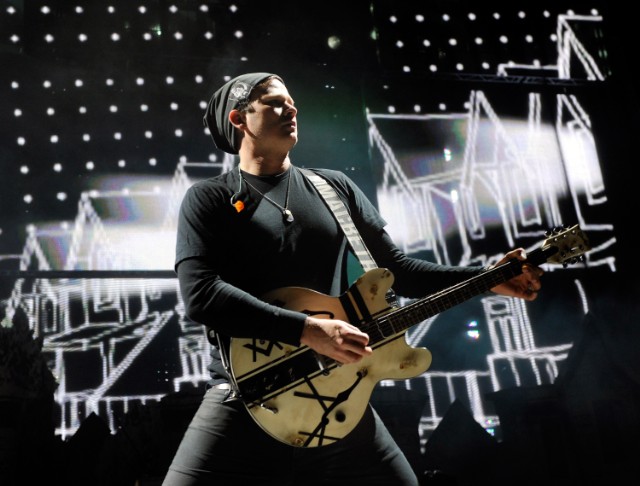 Musician is no longer the primary title for former Blink-182 co-founder Tom DeLonge; by the evidence trickling out this year, he might prefer being called a “researcher.” These days, he’s focused on Sekret Machines, his new UFO-centered “multimedia franchise,” which just put out a book where military and intelligence sources tell classified stories about paranormal contact. (Sekret Machines Book 1: Chasing Shadows also comes with T-shirts and “commando sling bag,” along with a custom soundtrack from his band, Angels & Airwaves.)

DeLonge has always viewed his work on UFOs—which he’s cited as the primary reason he left Blink-182 for the third time last year—as expansive and interdisciplinary. As he explained to Mic this summer, studying the mysteries of life in space involves “religion and cosmology, and it has to do with politics and secrecy.” As the Wikileaks e-mail dump earlier this month clarified, DeLonge is serious enough about that last part to have actually interfaced with John Podesta, current chairman of the Clinton campaign and former Obama and Bill Clinton staffer. The e-mails indicate that DeLonge interviewed Podesta last year about a potential documentary, and that he wanted to organize another meeting with “A-Level officials” from the goverment’s “most fragile divisions, as it relates to Classified Science and DOD topics.”

In a recent Instagram post, the pop-punk icon spoke out about his feelings about the leak, and they seem to be rather conflicted. DeLonge writes that “Wikileaks really messed some important stuff up,” implying that he was upset that his private emails about “Classified Science and DOD topics” were released to the public. Also, however, he seems excited about the higher profile his research has gotten because of the release of the e-mails, stating “Project is still on… things just got bigger.”

Until Sekret Machines Book 2: Tales of Podesta, Tom. Read the full post below:

I am still here. Wikileaks really messed some important stuff up. What seems like ridiculous subject matter to most, is of massive importance to admirable National Security Leadership. It's easy to poke fun about the topic from an armchair, but unless you're invited to the meetings I have been a part of, then…no more laughing. Big things are coming. Project is still on, believe it or not, things just got bigger. #SekretMachines

Angels and Airwaves Are Working on a New Album