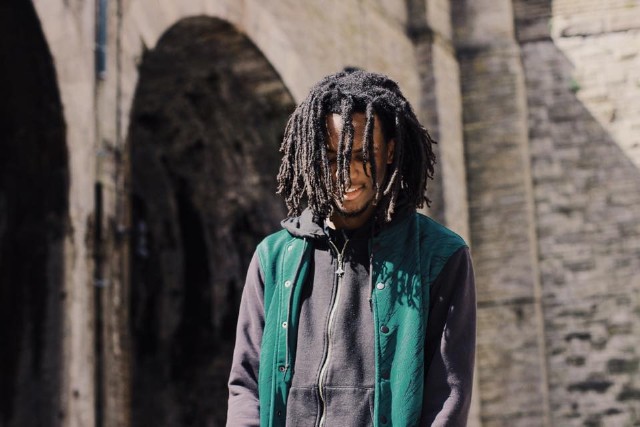 A few years into his career, Chicago’s Saba is becoming a known commodity — mostly because he’s scored features on all of Chance the Rapper’s major releases (2013’s Acid Rap and this year’s Coloring Book, as well as last year’s Donnie Trumpet and the Social Experiment “mixtape” Surf). The 22-year-old rapper and producer debuted “Angels” with Chance—whom he met through Chicago’s vibrant YouMedia open mic scene—on Colbert last year, proving himself an apt, appropriately hyperactive sidekick for Chano.

Many Chicago rap devotees are already familiar with Saba’s solo work—2014’s sprawling ComfortZone, in particular. But with his upcoming genre-bending Bucket List Project (out October 27th) the rapper is at a perfect moment in his career to make a bigger impact on the national scale. On his dense new single “Church / Liquor Store,” he proves that he’s extending himself musically to meet the challenge, juggling rapid-fire flows boasting a heavy TDE and 3 Stacks influence over a soulful shuffle overlaid with constantly modifying harmonies.

Saba creates a detailed Windy City-scape across both the song’s verses and chorus, positioning himself within the West Side’s hip-hop lineage (“My city the same ghost that made Lupe cry”). Eventually, he cedes the mic to one of Chicago’s other most promising Chance-affiliated up-and-comers, Noname—whose August Telefone mixtape stands as one of the most underrated and adventurous rap releases of this year—for a evocative, politically charged verse ( “They so prison the way they pipeline / Systematically lifeline / Erase all n*ggas, they so bulletproof from the law law”).

Listen to “Church / Liquor Store” below.