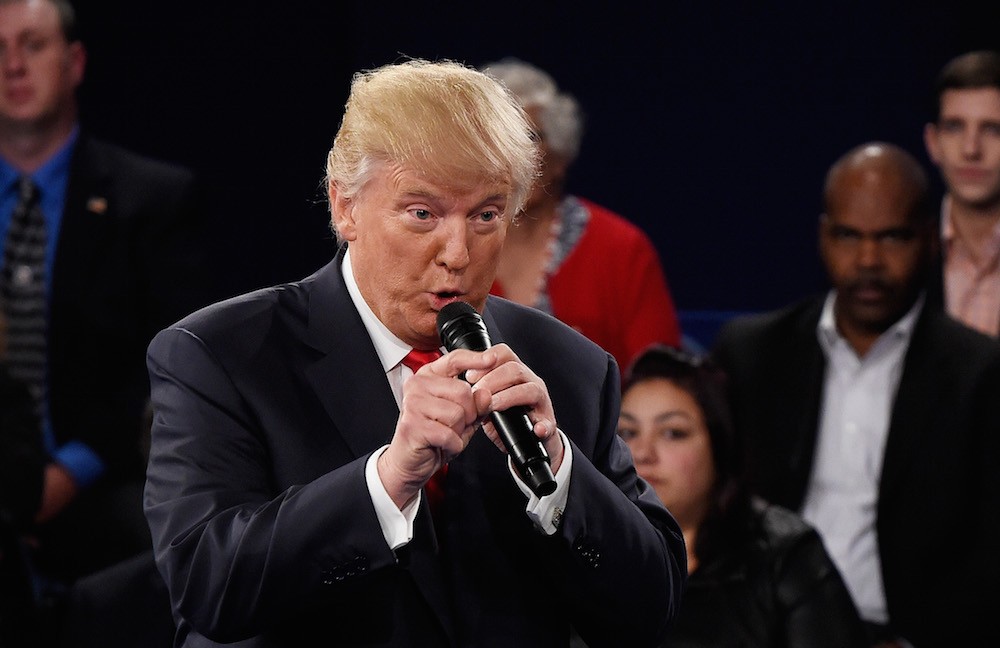 In last night’s depressing shitshow of a debate, Donald Trump abandoned any remaining pretense of decency as he desperately tried to maintain the support of his base. He, like Hillary Clinton, frequently rambled off-topic, ignoring the moderator’s guidance, but the key difference was that Trump used the sort of coded language–“inner cities,” “law and order,” and “Muslims have to report the problems when they see them”–that has made him a hugely popular candidate among the country’s racists and xenophobes. But more striking–and, at this point, predictable–is the fact that when he shifted to discussing actual policy or his opponent, he, again, repeatedly resorted to blatant, easily-disproved lies.

Of the 25 exaggerations and falsehoods examined by The Washington Post, 22 of them were uttered by Trump. As the Post put it, Clinton “on occasion made a factual misstep, but it didn’t even compare to Trump’s long list of exaggerations.” He misled the audience or outright lied about Clinton’s emails, his support for the war in Iraq, the accusations against Bill Clinton, why he hasn’t released his taxes, ISIS, Benghazi, crime rates, Alicia Machado’s non-existent sex tape, Syrian refugees, the poverty rate of African-Americans in inner-cities, Iran, Obamacare, the San Bernadino shooting, and more.

"Many people saw the bombs all over the apartment" in San Bernardino. This is one of the baldest lies Trump has told on the debate stage.

Of course, it makes sense that Trump would lie. Entering the debate, his campaign was in shambles, with prominent Republicans renouncing their endorsements and calling for him step down–not to mention the rumors that even his running mate was considering abandoning ship–after audio was released of the presidential candidate encouraging sexual assault. For Trump, with victory extremely unlikely now, the goal was to rally his base—a group, as we’ve noted, that’s largely impervious to even the most blatant falsehoods—to stave off calls for his resignation and to maintain enough momentum to get him through November, when he can convert his failed candidacy into whatever profit-generating enterprise he chooses (a new conservative media empire?).

Lying to make Clinton look as awful as possible, in addition to literally stalking her on stage as she spoke, panders to that base no matter how outlandish his claims or how loud his sniffles. By continuing to rely on vague abstractions and obvious lies, he’s betting that a huge amount of Americans will believe what they’re told at face-value. And in a post-factual debate, that might be true: More than a third of Americans surveyed in an instant poll by CNN said Trump won the debate, and another 62 percent said he surpassed their expectations.