Luke Cage isn’t the first black comic book hero to get a television series. Static Shock was a Saturday morning staple at the turn of the millennium, and Cartoon Network’s Justice League used the African-American John Stewart as its Green Lantern. But Netflix’s rendition of the righteous hero is the first live-action television take, as well as the first to really enhance itself with black culture. The show is set in Harlem, a neighborhood known as an incubator of black expression. A recurring setting is the barbershop, the traditional spot for copping a caesar as well as being an inter-generational communal space for African Americans.

Because music is a major part of African-American language, it’s no shocker that some of the first few episodes’ major scenes occur around musical set pieces. To find the right feel, series creator and former music journalist Cheo Hodari Coker went after two lauded black music experts for the soundtrack: Ali Shaheed Muhammad, who mined jazz and soul’s lineage for groovier tomorrows as one-third of A Tribe Called Quest, and composer Adrian Younge.

After striking up a friendship over the past couple of years, Coker invited the duo on board as they were working on a collaborative album. Muhammad and Younge took cues from iconic film composer Ennio Morricone, pre-T-Pain autotune soul, and, naturally, hip-hop abrasion to compose the series’ soundscape. Luke Cage is the Western soundtrack the J.B.’s and the Ummah never got a chance to make, with a shit-kicking “Bring Da Ruckus”-scored sequence thrown in. The world-building music is also a deliberate tribute to Harlem, whose cachet in black music reaches from Minton’s to “Pesos.”

“What we did was understand the rich culture that Harlem has for the music, and the political aspects in power and influences from New York,” Muhammad told SPIN. “We took the feeling of what it meant to be black and to have power in your own little city and have influence. We used that as the soundscape to build off of.” 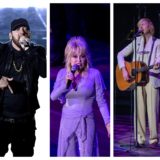 Why were you guys so down to do Luke Cage?
Ali Shaheed Muhammad: Cheo Hodari Coker, the showrunner/executive producer of Luke Cage, reached out to Adrian and I individually. We were working on an album together at the time. We met with Cheo; he explained to us what he was doing, gave us a little insight into the first script, and we were 100 percent onboard.

I read that you composed the 13 episodes like 13 albums. Can you elaborate a little on that?
Muhammad: Each episode has roughly more than 20 minutes worth of music, which is a lot of music to cover in just a short amount of days. Music is a huge part of the series; it’s like a character. Usually it takes, for me, at least 12-18 months to record one album. This one was 13 albums in nine months.

When you make an album, it’s not about the one song. You want people to listen to the whole album, unless it’s just mashed up pieces of music that you’re calling an album. But this is an album you want to go from beginning to end to really understand the body of work.

Adrian, you composed Twelve Reasons to Die with Ghostface Killah. Since vengeance is also part of Luke Cage’s plot, did it bring you back to that headspace?
Younge: It didn’t, actually. The music I did for Twelve Reasons to Die—I’ve been doing the music anyway, so Ghostface fell into that because it was natural for us to work together. I can’t say it’s analogous to my other projects. It’s more like: All of my career, all I’ve done, I’ve been trying to get closer and closer to the moment where I have the platform to do this. This is just something in its own world. Also, this is something Ali and I created together. This is connectivity, but this is the pinnacle.

Because Luke Cage is a Marvel/Disney series are you consciously trying to make sure your stuff crosses over?
Muhammad: I think that because Luke Cage is a black superhero who listens to hip-hop and is a fan of Wu-Tang, it gave us the playground to do what we do. We’re fans of Wu-Tang: We know the music, and the source material for Wu-Tang. We aspired to make the same kind of sound. In terms of crossing over to Marvel, we didn’t have to cross over to Marvel: Marvel crossed over to us. Hip-hop is 40 years long, as an art form. The world is a part of that, and appreciates that.

In the show, there are little touches that tie in with black Harlem culture—the Pee Wee Kirkland photo in the barbershop, the copy of Invisible Man on Luke’s bed. Is there weight in tying the music to these references?
Younge: This whole world is really created by the mastermind known as Cheo. He provided the foundation and the colors, and he ultimately made the painting. All those details, that’s just Cheo being Cheo. He’s crazy smart, and he leaves a lot of small details for the real connoisseur to discover on their own. With music, all we do is come in and try to insinuate what he’s already created. We just try to make the painting more beautiful.

Muhammad: As a viewer, and more specifically as a New Yorker, it makes you feel good to see Pee Wee—even though we have no say in any of those choices. When you see that image in Pop’s Barbershop, there’s a focus on it. At some point, it might lead to discussions for those who do know; if you’re younger, and you’re unaware, you’ll ask about that. Same thing about Invisible Man—knowing how it ties to each character, you’ll go back if you’re interested.

Younge: Luke Cage is a gift. There’s so many different ways you can look at it.

As you make music for a neighborhood that’s been the birthplace of a canonical black art, is there a sense of things coming around full circle?
Younge: “Full circle” would mean that there was focus—that people knew about black culture in Harlem. So, the question is if we came back after we left. If we did leave, I can make the argument that it has become full circle, became Harlem is known as the place where we had the Black Renaissance. During segregation, it showed that black people that you could come to a place, and prosper, and make things happen within your own community, and thrive. For Luke Cage, it’s that first black television series by Marvel—a  multibillion dollar company that has fans in outer space—saying, Let’s go to Harlem. So the argument can be made, but that’s under the assumption that the world was left with the notion that Harlem is a place that spawned a black renaissance.

Muhammad: It’s an interesting perspective, but I think Cheo touches on seeing Harlem in this modern day. In terms of it still having an influence, it does. Look at A$AP Mob. We reference Big L. Big L’s name still holds high, I don’t care if you’re in Japan or Brazil. From that perspective, I think Cheo just used what already has been established and is still thriving to put the focus and spotlight on it—to just say we’re still here.

If Luke Cage does get renewed, how interested would you be into doing season after season?
Muhammad: [Laughs]

Younge: I mean, we loved the team. This is an environment where a composer pretty much has the ability to do whatever he wants with unfettered discretion, because they trust us. It’s not easy to find a situation like that. In addition, we love every single person we’re working with here. When you find a family like that, and you’re all coming together to make something bigger, why wouldn’t you want to be a part of that? If it all works out, hell yeah—we’d love to be a part of this.

Since you were making an album before this, are you gonna get back to it?
Muhammad: That was the plan a month ago. I thought we’d be finished by now. We definitely are trying to get this album wrapped up, because we want to release it early next year.

Lastly, how do you feel 25 years after The Low End Theory?
Muhammad: It depends on what day it is. It’s great to be loved, and I think that when you’re making music and chasing your dreams as a teenager, you live for the moment. Though some of us thought beyond the moment, I can’t say that I thought 25 years later our music would be talked about. Now that it is 25 years later, that means a lot. Thinking about many of my peers who were there making music, who inspired us at the same time, and no one’s really talking about them or wondering if they’re ever getting back together. I can think of bands that I’m passionate about, and it’s really like: You guys are never gonna do another record? I understand what that feels like.

To be in a group that evokes that sort of emotion is trippy, but I will say that we wanted to be sincere and truthful, and we wanted to be inspiring when we made that music. We fought adversity with people who wanted to do things differently—the record company, promotion for the record, places it couldn’t get played—into now knowing that when you walk into a party, A Tribe Called Quest will be playing. It’s humbling. I will say to those making music right now, to be truthful and honest and sincere, and if you do that, your art will live on beyond you. There are few things as good and as grand as that.