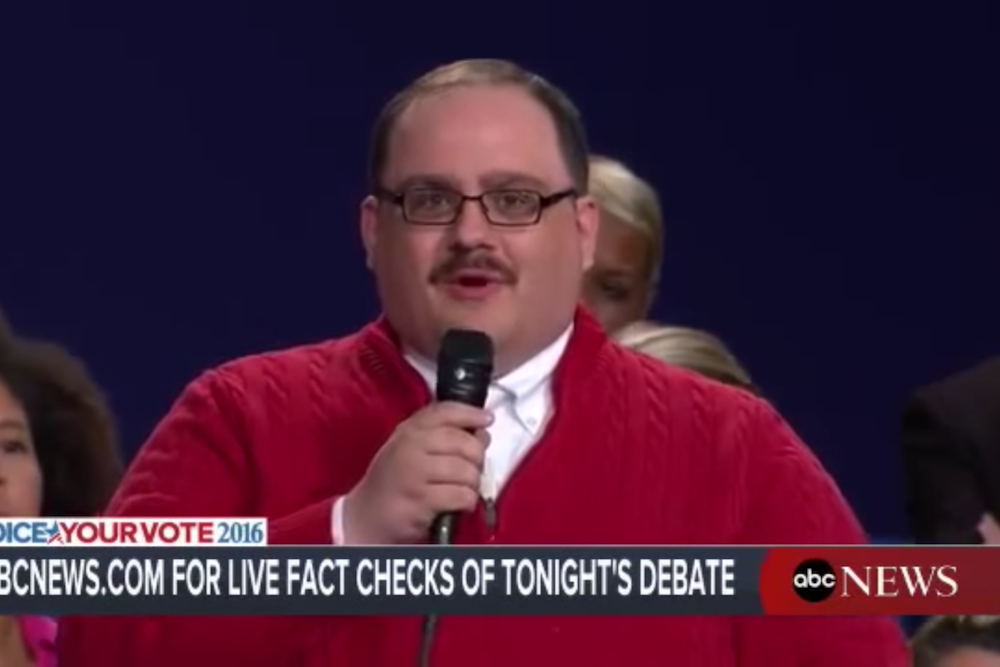 In a presidential debate that focused at least as much on each candidate’s history of scandal as it did on their policy ideas, one man stood above the ugly fray. His name is Kenneth Bone, and you can follow him on Twitter.

Near the end of the debate, Bone asked a question about how each candidate would transition America to environmentally friendly energy sources while minimizing job loss in the fossil fuel industry. Something about the sweater, the glasses, and the stylish ‘stache captured the hearts of America, and Kenneth Bone became an instant sensation.

A host of Ken Bone parody accounts cropped up on Twitter, but only one of them makes a legitimate claim to Bonehood: @kenbone18, which Bone himself identified as his true account in a radio interview this morning.* Bone is close to 10,000 followers as of this morning, and he’s spent the last few hours responding to fans.

Bone said on CNN this morning that he’s still undecided on who he’ll support in the election next month. One figure he’s unafraid to endorse, however, is Ariana Grande, who he tweeted approvingly at in 2013–the first tweet from the @kenbone18 account.

@ArianaGrande You're a great positive role model for young girls and a big time talent,never let some image maker or muck raker take that!

*CORRECTION [12:00 p.m.] This post previously identified @RealKennyBone as the likely true Ken Bone Twitter account. Against our own headline’s advice, we accepted an imitator, and we regret the error.

What If Hillary Clinton Had Picked Bernie Sanders for Her VP?

No One Really Knows How Donald Trump Will Handle Legal Weed

One Week After Trump Election, the Presidents of the United States of America Announce Breakup