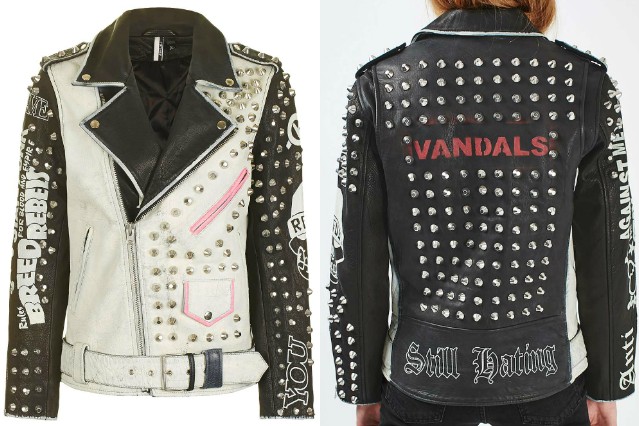 Fall is here, and you’ll need something warmer to wear over your $200 Black Flag t-shirt. Luckily for you, Topshop is offering a $700 leather jacket with the words “Against Me!” printed on the right sleeve. The U.K.-based clothing retailer didn’t seek permission from the band, says Against Me! frontwoman Laura Jane Grace:

Hey @Topshop, you’re selling a $700 leather jacket with my bands name on it and you have no permission. Not cool. pic.twitter.com/fxdBF9w6Uy

Topshop’s jacket also features the word “VANDALS,” which happens to be the name of longtime California punk band the Vandals, and “REFUSE,” which isn’t far off from Refused. There’s also a number of other slogans apparently intended to sound “punk rock,” including “RULES BREED REBELS,” “STILL HATING,” and, inexplicably, “SLAVE.”

In 2013, Rihanna won a U.K. lawsuit over a Topshop shirt featuring her face. (The specific legalities of that situation wouldn’t apply here, since U.K. law doesn’t recognize the same “right of publicity” as U.S. laws do.)

Update (September 18, 9:20 a.m.): Topshop has removed the jacket from its site. See a cached version of the page here.