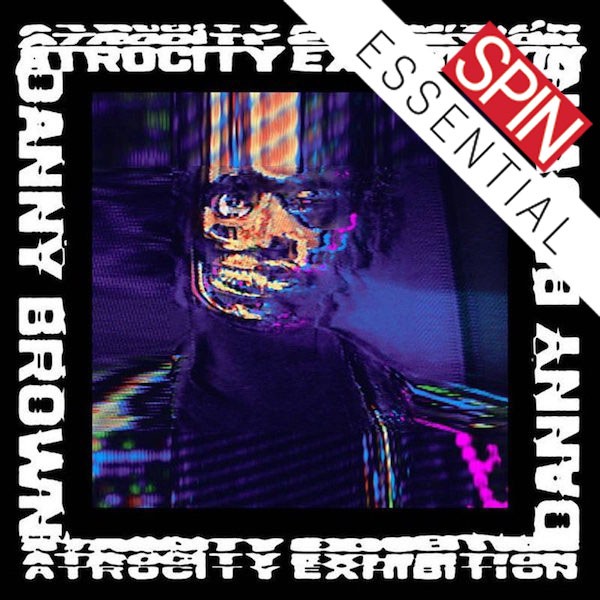 Danny Brown is a man in limbo who is struggling to find balance. In song he’s autobiographical, often flipping between zonked out and deadly serious, usually in existential crisis. He teeters between drug dealer and user, caught in a cycle of intense lows and overwhelming highs. His last album, 2013’s Old, was literally split into halves exploring these dynamics, and how his troubled past guaranteed an uncertain future. The Detroit MC is hyper-aware–he understands self-destruction intimately and constantly whittles at its components, a skill he seems to hone with each new release. He has found comfort in complete chaos; always despondent, yet defiantly unfazed by anything. It’s an idea he clearly articulates on “Ain’t It Funny,” the centerpiece of his new album, Atrocity Exhibition: “Upcoming heavy traffic/ Say ya need to slow down ‘cause you feel yourself crashing/ Staring in the devil face/ But ya can’t stop laughing.”

Brown seemingly stared the devil in the face in 2014 when he publicly professed his depression and anxiety in a series of since-deleted tweets. “I can’t sleep my anxiety is at an all time high but don’t none of y’all care about that shit .. Y’all just want me to be goofy,” he wrote. “Depression is serious y’all think I do drugs cause it’s fun … I would no other way to escape. Nobody cares if I live or die … Y’all want me to overdose just don’t be surprised when u get what u asked for.” He was crashing with an audience, and could sense that some fans were fetishizing his turmoil. Two years later, Atrocity Exhibition, feels like a pointed punchline aimed at those spectators–it’s a gripping tragedy with a laugh track. This is an inverted Danny Brown album: less zany antics and lines designed to get chuckles but even more misery. Named after a Joy Division song (and a J.G. Ballard book) in which Ian Curtis deems fame a freak show (“Asylums with doors wide open/ Where people had paid to see what’s inside”), the album shuns the celebrity circus. Atrocity Exhibition is a demonstration in self-loathing; a wicked rollercoaster ride through doped-up insecurity.

The album’s opening track, “Downward Spiral”–a nod to the title track off his breakthrough XXX–sets the tone strong: “Your worst nightmare to me is a normal dream,” he raps. What follows is exhilarating and terrifying. Even during the dizzying coke party on “White Lines,” he can’t help but wonder if his racing heart and scratchy throat are precursors to an overdose. The track is a great example of what we already know; that his mind is a labyrinth of anxiety. It’s no surprise that Danny spends much of the album playing in the darkness: buying a nightmare and selling a dream (“Rolling Stone”); drowning frustrations in a ocean of sin (“Downward Spiral”); numbing up with drugs to suppress feelings (“Golddust”); losing control and feeling soulless. His raps survey his days as a corner boy and his nights as a party rap novelty, and the subtext is that, when examining both closely, they’re equally restricting.

This is easily Brown’s most taxing album–it’s far heavier than anything on Old’s Side A, and reprieves are much harder to come by. There are still one-liners about cunnilingus (“Lick the clit and she do the Macarena”) and off-brand zingers (“I’m like Kubrick with two bricks and hoes on the strip”), just way fewer of them, and they’re changeups not standouts. They’re attempts to keep from keeling over, or to avoid being swallowed whole by melancholia. The writing is challenging and often harrowing, making the listener privy to his secrets. But this is his most rewarding album, too. A combo like the clashing Schoolboy Q-ad libbed stunt joint “Pneumonia” and the acid rock hymnal “Dance in the Water,” rap cuts that are slightly askew or unorthodox, shows off his eclectic taste. Glaze over the lyrics and it’s easy to get lost in a vortex of vocal samples trapped in the sound waves as spectres of their original songs, giving form to the ghosts Danny thinks he sees in the opener.

With help from frequent collaborators Paul White and Black Milk, UK electronic producer Evian Christ, and crate-digging maestro the Alchemist, Brown brings his persistent terrors to life. The production features carefully chopped vocal loops, surprise riffs and choruses, and quirky blips that vanish in instants. Brown reportedly spent $70,000 on samples for Atrocity Exhibition, and he got his money’s worth. The deflating accordion mash sampled on “Ain’t It Funny” segues well into the buzzing kazoo-esque blurts that drive “Golddust.” “Really Doe,” and “Lost” both lean toward the traditional with dusty drums and raw, unfiltered loops; the former, a rap-a-thon alongside noted wordsmiths Kendrick Lamar, Earl Sweatshirt, and Ab-Soul, proves Brown can hang with any lyricist. He enlists Cypress Hill’s B-Real for his stoner anthem for “Get Hi” and their respective squeals work well in tandem. The music straddles the line between gritty rap classicism and rangy, avant-garde composition, setting the baseline while he examines his own masochism.

There are times when his flows split open to reveal a different Danny Brown than the one who gleefully compared himself to Frankie Lymon and Heath Ledger back on XXX’s “Die Like a Rockstar.” In some moments he seems actually, surprisingly at ease, like on “Really Doe” and “Get Hi.” But outside these brief moments of calm, Brown mostly seems flat-out dejected, sometimes gritting his teeth, others completely emotionless. Atrocity Exhibition’s best cut is the drug peddler epic “Tell Me What I Don’t Know,” which finds him rapping as even-keel as he ever has as he navigates a nefarious underworld. It’s a stark reminder that Danny Brown is more than the caricature fans have drawn him to be, and that the price of admission to his personal rap clinic shouldn’t come at the artist’s expense.

Sheldon Pearce is a writer living in D.C.