Remember When Jimi Hendrix Protested the National Anthem on a National Stage?

One day in August, a young black man at the top of his game stood on a field in front of hundreds of thousands of spectators and issued a blazing protest against America and its national anthem. Jimi Hendrix was scheduled to perform on a Sunday, but rain had washed out many of the performances on what was scheduled to be the final day of the 1969 Woodstock Art & Music Fair, and the subsequent delays pushed his slot back to early Monday morning.

At first, Hendrix’s distortion-drenched rendition of the “Star Spangled Banner” was conventional enough. But right around the time someone singing along would be getting to “o’er the ramparts we watched,” Hendrix began to slyly use the music’s own martial bombast to reflect the violence carried out under his nation’s flag. He held a key note a little too long, applied a little more pressure to his Stratocaster’s tremolo bar, and sent the pitch slowly downward as it rung out. It was a subtly unsettling effect, like the moan of an animal in distress, or an air-raid siren. He quickly abandoned the original tune completely, turning the music to a literal interpretation of the lyrics: bombs bursting in air, rockets lighting up the night. The rumbles and wails also conjured up images of war that don’t often make it into anthem lyrics: screaming children, tank treads trundling forward. Ordinary performances of “Star Spangled Banner” run about two minutes long or less. Hendrix played for twice that long, enumerating the ugliness behind the American glory that the song is meant to represent.

Hendrix’s landmark “Banner” performance was every bit the protest—every bit as anti-American, for those who’d construe it that way—as Colin Kaepernick’s refusal to stand during the anthem at every San Francisco 49ers game since a preseason outing on August 26, and the refusal of every other NFL player who has been inspired by Kaepernick. Nearly 50 years ago, Jimi Hendrix openly condemned that American soldiers were deploying napalm against civilians in Vietnam; Colin Kaepernick hates that American police officers are killing black men in the streets. “The world is nothing but a big gimmick, isn’t it? Napalm bombs, people getting burned up on TV,” Hendrix said in a promotional video from the time. In the same clip, he was asked for his own view on the police. “American cops? Oh man, it’s really great, man, they’ve got some really groovy uniforms, stripes down their pants,” he answered, a smile that can only be interpreted as ironic flashing across his lips. “Clubs in their pockets—wow, outta sight. Guns!” 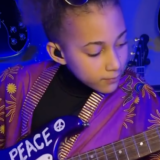 Kaepernick’s criticism of law enforcement is more pointed. “I am not going to stand up to show pride in a flag for a country that oppresses black people and people of color,” he said in an interview after his first game sitting the anthem out. “To me, this is bigger than football and it would be selfish on my part to look the other way. There are bodies in the street and people getting paid leave and getting away with murder.”

White baby boomers, who benefitted so much from the same power structures that radicals of the 1960s stood against, were nonetheless seduced by the decade’s music and culture, by the spirit and aesthetics of rebellion, if not by its actual ideas. Leave the politics, take the guitar solos. As boomers grew up and began telling the stories of the ’60s, Hendrix’s “Banner” performance, like much of the era’s anti-war activism, was both lionized and neutered in the American imagination. The bloody failure of the war in Vietnam is remembered as a forgone conclusion; its protesters as benevolent flower children who simply arrived a few years early to the idea that America’s involvement was futile, and ushered the rest of society along with their groovy tunes and fashionable sunglasses. But in reality, protesting the war was a bold and often dangerous decision, physically or politically. (Sometimes you were killed for it.) According to the rock historian Lauren Onkey, Hendrix and his band were threatened with violence if they played “The Star Spangled Banner” during a tour stop in Dallas.

Whether Kaepernick’s protest will benefit from the same self-satisfied hindsight remains to be seen. An NFL executive called him a “traitor” for his refusal to stand, and right-wing media blowhards are using much harsher language than that. After some players on the Washington Spirit of the National Women’s Soccer League announced their intent to follow Kaepernick’s lead in an upcoming game, the team’s owner moved the scheduling of the anthem forward, so that it was performed before the players even took the field. Hendrix’s performance was vulnerable to the sanding of its uncomfortable edges in part because of the slippery nature of the medium: no matter its creator’s intent, music without words can always be heard as pure abstraction. Kaepernick’s politics, on the other hand, are explicit and impossible to ignore.