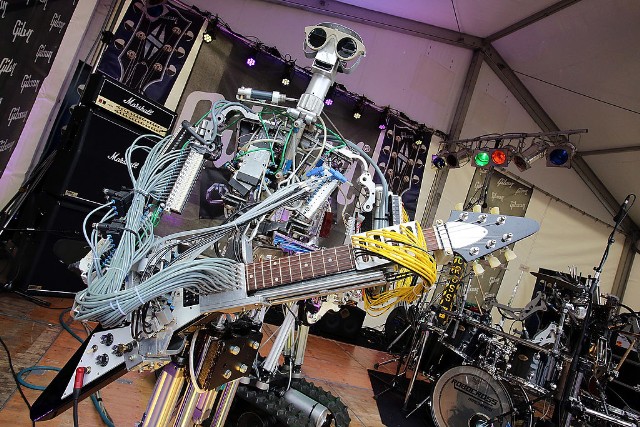 I know, I know. Isn’t pop music written by robots already? Har har. But really: Researchers at Sony’s Computer Science Laboratory in Paris have shared a pair of tracks created with the assistance of software called Flow Machines. The program analyzes a database of existing songs to “learn” musical styles and identify commonalities, then “[exploits] unique combinations of style transfer, optimization, and interaction techniques” to synthesize original music. Researchers can tailor the process to produce tunes that sound like the work of a particular artist—for example, “Daddy’s Car,” which is intended to emulate the style of the Beatles:

A second song, “Mr. Shadow,” is fashioned in the style of Great American Songbook composers like Irving Berlin and Duke Ellington:

The singularity isn’t upon us. Neither of these songs were entirely composed by artificial intelligence, nor did a computer write the words. As a post from the Flow Machines blog explains, French musician Benoît Carré “arranged and produced the songs, and wrote the lyrics.” Coherency apparently wasn’t high on Carré’s list of lyrical priorities, but he did sneak a “good day sunshine” into the “Beatles” song, which incorporates so much sonic déjà vu that it sounds like a Muzak version of the uniformly disappointing covers from Across the Universe.

A full album of Flow Machines AI music is expected next year, but the Sony CSL team has been working on computer-assisted music for a few years now—mostly jazz, the subject of a 2014 article in the Atlantic. The two newest tracks just happen to be their first public foray into pop styles. These “AI” songs may still reside in science-experiment territory, but the possibility of their existence raises other questions: How should the litigious world of songwriting licensing handle a piece of commercially released music specifically intended to emulate, but not duplicate, another artist? Could someone with a significant influence on the sound of modern music—like, say, the Beatles—argue that their copyrights are infringed by software designed to deconstruct, analyze, and iterate on their actual work?

If you’d like to experiment with making some AI music yourself, a startup called Jukedeck will generate a song in the genre and mood of your choosing. Its creator told Quartz he imagines it being used by people who need budget background music for advertisements or YouTube vlogs. It can’t spit out songs inspired by any one human musician, at least not yet. It will, however, ask you confirm that “I’m not a robot.”