"There were a few years where I genuinely bulls**tted myself into thinking America was further along than it was." 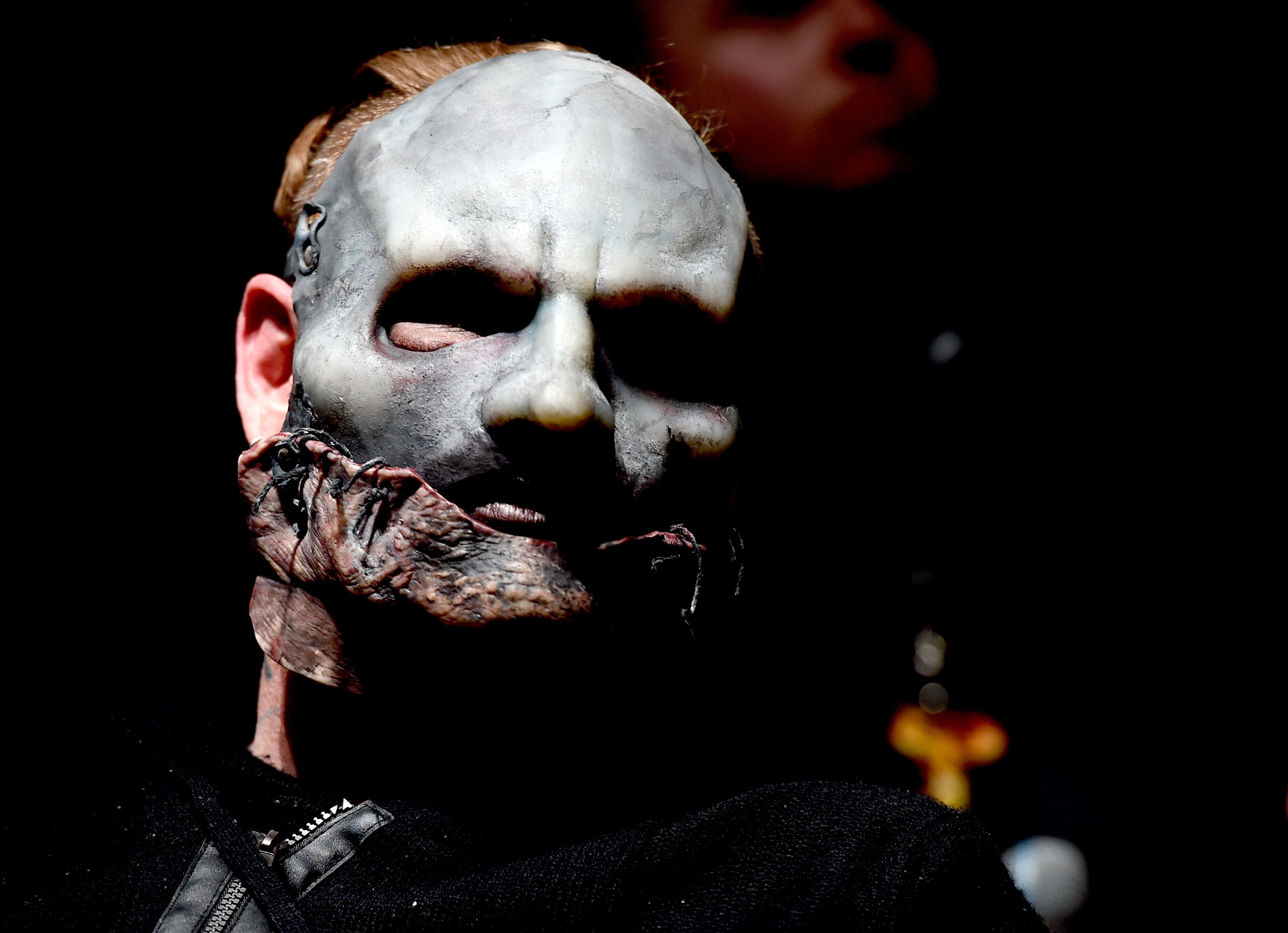 Slipknot and Stone Sour frontman Corey Taylor doesn’t typically sing about politics, but that hasn’t stopped his band from becoming politicized this year. Former Gawker writer Sam Biddle published an article entitled “This Shirtless Mountain Dew Motherf**ker Is the Living Embodiment of Trump-Inspired White Supremacy.” The article includes a video of a Donald Trump supporter screaming anti-Hispanic rhetoric at a crowd of people, including a police officer. But most pressingly, the opening line of the article originally read: “You’re looking at the face of resurgent mainstream white hatred in the United States — it listens to Slipknot.”

Taylor engaged with Biddle on Twitter shortly after the article was published.

As smart as @samfbiddle is he knows nothing about Slipknot. He’s as guilty of prejudging as the guy in the story. https://t.co/rwfNWuEfuQ

Edited or not, Biddle’s article is indicative of a longtime social assumption: that fans of extreme metal are mostly white and politically ignorant, if not outright hateful. Mouthy hard-rock linchpins like Ted Nugent, Dave Mustaine of Megadeth, and Pantera’s Phil Anselmo don’t exactly help. But Gawker’s characterization of Slipknot fans runs counter to Taylor’s. An outspoken liberal and social-media gadfly, the Slipknot frontman chatted with SPIN to address how the current political landscape ties in with perceptions of his fans.

Could you explain what happened between you and Biddle, from your point of view?
A fan tweeted Biddle’s article at me the day it went up. Me being me, obviously I said something about it, and then all these people from Gawker came to his defense and said, “Actually, he’s a big Slipknot fan.” He got involved and said that he did not put that [reference to Slipknot] in there. He thought it was an editor’s note. That was when the person [Pareene] who edited the article amended it. I was kind of blown away. I have never seen that happen before in my entire career.

People want to put a face on the kind of people that Trump is attracting as followers, but there are people from all walks of life who want to vote for Trump; it’s scary because it’s everybody. Before, 20 or 30 years ago, you probably could have put a face on the stereotypical person who would be subjected to this kind of bulls**t. Now it’s interesting, the overt and sometimes subtle racism that’s coming out of these kinds of people.

Are you and Biddle still in contact? He left Gawker shortly after your interaction and deleted all of his tweets from that time.
I remember reading that he was leaving Gawker before I saw the article, so I think that was already in effect. I had no idea that he had deleted all of that stuff on Twitter. I hope that wasn’t related to any backlash from our fans. We worked it out right there — I even put out a tweet asking people to leave Sam alone, and [explaining] that it was a misunderstanding. I still follow some people who work at Gawker.

Why would someone want to pin the Slipknot hat on that particular anonymous bigot?
I think it was an editor’s choice. “Who’s a big metal band? OK, Slipknot.” I think [Gawker] tried to use a stereotype to hone in on a problem but it blew up in their face, completely minimizing the thing they were trying to say. And I actually agree with what the article was saying — that because no one has put Trump in check, more of this rhetoric is starting to come out of the woodwork. This is more like [former presidential candidate] George Wallace in ‘68 than it is anything else.

That article also reaches back toward the Heavy Metal Parking Lot stereotype, as if to say, “People who are into extreme hard rock are not capable of intellectual thought.”
Yes, and I don’t know who keeps perpetuating that stigma. I can probably send you links to eight different studies that show that higher intellectuals listen to heavy music when they study, find it stimulating, enjoy the challenge of listening to it.

Do you think that there’s a common political spectrum across the fans of your music?
No, absolutely not. And I’ve never tried to push that on people. I do know people that used to be fans of mine — and I stress, “used to be” — who are Trump supporters, and because of what I’ve said about Trump, they have stopped listening to me. Honestly, that’s unfortunate. Maybe in a year when things have settled down and we know what’s going on politically, they can come back and be a fan. I’m not really worried about it; I’m not going to lose sleep.

Your music is almost resolutely apolitical, but you as a social-media entity are very political.
The reasons I try not to be political when I sing are A) I try to relate to people in a way that is not beating them over the head with a message, and B) what I write represents the rest of my band as well, and it’s not fair for me to try and force a message on guys that I enjoy playing music with. Even if they agree with me, I don’t want them to feel like they have to defend something that I said in a song.

In the last year, many extreme metal bands less popular than Slipknot or Stone Sour have accused the genre of becoming too liberal, while many websites have called the genre itself too conservative.
Obviously, the majority of guys in bands that I hang out with lean to the progressive side, let’s put it that way. We tend to lean more liberal just because it’s more inclusive. But I have friends in bands who are Trump supporters, and I just choose not to talk about it. Everything that I have read about people who support Trump suggests all their reasoning is based upon faulty research. And when you know that someone is basing their reasoning on bad research, or bad poll-taking, or other resources that skew right and drum up their own numbers, there is no way that you will win an argument.

The things that gained Trump traction in the first place were his controversial statements on Hispanic and Mexican-American immigrants, so it’s funny to me that people would associate metal with that prejudice, considering so many beloved metal musicians are Latino, like Tom Araya from Slayer.
You’re absolutely right. I think heavy metal and hard rock were the bastion of freedom for misfits and kids who were made to feel [like they’re] outside of “normal” society. So not only did you have kids of different ethnicities, but you had kids like me who grew up dirt-poor. Metal spoke for me because it wasn’t until I was much older that I felt that I had a voice.

Here’s where people get it wrong: The metal fans that come to our shows are some of the most open-minded, encouraging, embracing, protective, and progressive fans I have ever seen. I never worry that something bad is going to happen at one of our shows. If an accident happens, that’s a different thing, but I am never worried about fights or attacks because we look out for each other. Trump’s message is so anti-Slipknot it’s not even funny, because we have always tried to get people to stand together, and everything he does is so divisive. Trying to get people to equate Muslims with terrorists is just trying to control and manipulate one more group of people. His stances on Muslims and Latinos and his absolute silence on Black Lives Matter prove that he is unprepared to bring people together. He is prepared to tear them apart so he can control them.

Have you read the book What Are You Doing Here? by Laina Dawes? It’s about her experience being a metal fan who is also a black woman.
I have not. Is it good?

Not to speak for Dawes — but her argument is essentially that African-Americans are the ones at risk of race-related violence at your events, while you or your white fans are not.
There were a few years where I genuinely bulls**tted myself into thinking America was further along than it was. I’ve learned from that in the last couple years. But when I look out onstage I do not see a sea of white people, I see a very mixed audience. Maybe I have a… I don’t want to say naive view of what our crowd could be, but I have a hopeful view. So many people of so many different backgrounds come to our shows that you couldn’t show us a definite demographic of who listens to Slipknot. I would hope that that knowledge would encourage [Dawes]. I’m definitely going to read that book.