A day or so after I talked to James Ferraro, the 28-year-old “god of vaporwave,” I found myself deep into my bank’s automated phone system and listening — really listening — to the hold music. The songs were short but boisterous and irredeemably cheesy, as if their composer had just upgraded from a MIDI controller and grown drunk with power. It was awful, and I was digging it.

Ferraro’s latest project, June’s Human Story 3, is a self-released album that plays off the concept of transparent commercialism. It doesn’t sound like hold music, but it’s not the furthest thing from it, either. Story alternates between orchestral scintillations and bloopy squawks, dinging bells and an earnest, computerized female voice who reads out words like, “Starbucks. Collapse. IKEA.” One sound in particular, in the final seconds of the uncanny “Security Broker,” convinced me again and again that I’d just missed a phone notification.

In conversation, Ferraro is as good-natured and approachable as his music is esoteric and unpredictable. Despite his futurist aesthetics, he’s no early adopter. “I think technology is making people really egotistical and self-centered,” he says. “[Brand names] become background noise, and there’s no one else there to tell you that it’s wrong, no one there to tell you that our environment is really unnatural.” Ferraro is a niche musician, but, like a conceptual artist, the limited reach of his work belies its broad social critique. To open yourself to Human Story 3 is to shift your perceptions, and to find yourself asking questions like, “What if future generations were to judge us by our banks’ hold music?”

I reached Ferraro at his home in Los Angeles to ask him about his newest record and its predecessor, Skid Row, a concept album about 1990s L.A., released back in November 2015. We talked for more than an hour; the following interview collects highlights of our conversation. To speak to an operator, scroll down. 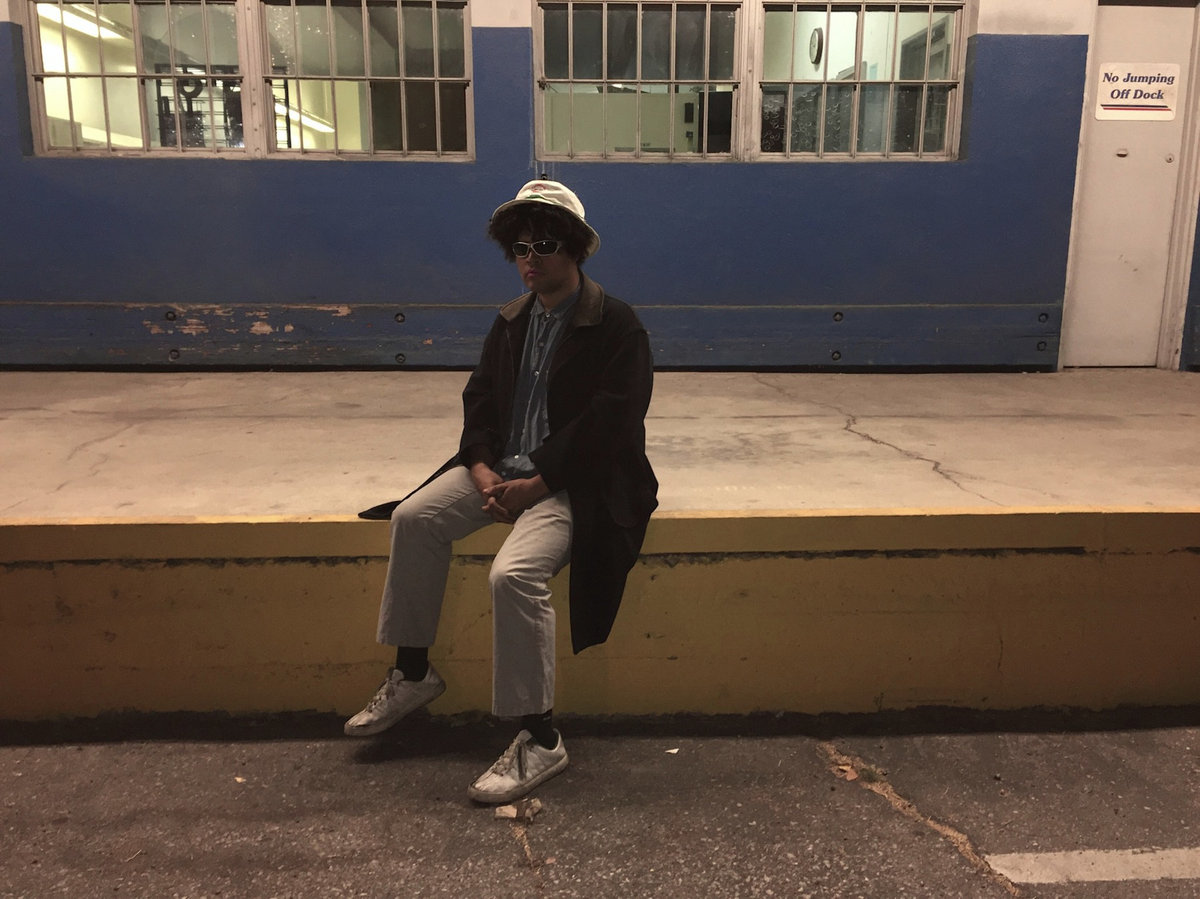 Are any of the voices on the album human, or are they all computer-generated?
There’s some choral stuff that is a mixture of digital choirs and actual choirs — the [University of Southern California] Trojans choir. Most of the speaking, the voices, are all text-to-speech, computer-generated voices.

When you’re using text-to-speech, what do you do if the computer can’t pronounce a word?
I actually really like that, because I like messing with that. For me, I’m not really looking for the exact pronunciation or copy of the human articulation of the word. That’s the point, in a way. The imperfections of this technology. It’s surrealistic — it’s not completely there, but it’s almost there.

A lot of the spoken words on Human Story 3 are brand names. It’s safe to assume you weren’t paid for any of those, right?
Oh, no. That would be cool!

If a brand offered you money to use their name in your music, what would you say?
Probably not. Maybe in another setting, but not for a record like this. I’m wondering if that would give it extra weight. Maybe I would do it so that the production of the brand names would be a little heavier. I don’t know. Probably not, but I would be open to it.

You wrote a statement on Twitter called “The Premise of Human Story 3“ to explain your vision for the record, and it was a little dense. It sounds like you’re trying to strike a balance between embracing technological possibilities and the downsides that come with them. What’s an example of how you hear that in the music?
For instance, the text-to-speech technology, like they use in GPS or to help blind people. There’s a number of ways that that technology is to be used in actual, meaningful ways, but a lot of the time, the technology is used for commercial reasons or advertising. My whole point is that there’s a lot of duty in human technology and how we are able to use certain things, but the way it usually ends up being used is through ways that are less meaningful. It’s a double-edged sword, where our own technology, which is a really beautiful thing, is used against us.

You’ve released a ton of music over the years — do you care that so many of your old tape or CD-R releases are up on YouTube?
Not really. I used to be more annoyed by it because, number one, a lot of them I don’t really consider to be albums. I think I have an extended discography that exists online that isn’t really my own conception of my work. I think it’s cool that people are distributing it on their own. I guess I wish there was a little bit more discretion on what people would decide to call an album and what they wouldn’t. Some of that stuff on Discogs or YouTube, I made one copy and gave it to a friend.

There’s some debate among scientists as to whether the Anthropocene Era is real, and that humans have sufficiently altered the planet to justify naming a new geological age. You named a song after it (“Anthropoceniac”), so do you think we’re living in it?
I think it’s an emerging concept that, whether or not it is real on an actual, physical level — meaning there’s some danger on Planet Earth — in our local environments, at least, it exists. Not only how we produce pollution, but how the things the we create and the objects we make outlive our physical bodies and could be fossilized and available for future generations. Also, secondly, as far as this age of human beings, our emotions, our intelligence, our psychology, all this [intangible] stuff, in a negative way, definitely exists. You can feel its presence, regardless of it being measurable in scientific terms.

We don’t just leave fossils in the ground, we leave digital fossils and fingerprints.
Yeah, exactly. Files even. The internet is a huge ocean of information. A lot of what is being used or can be used is being excavated.

Did you make Human Story 3 with a place or a time in mind, the way Skid Row has ’90s L.A. in mind?
I actually didn’t. With Human Story 3, I just wanted it to come out as soon as possible after I was done making it.

Personally, Human Story reminded me of a Blade Runner time period — a future that’s different but still recognizable.
That makes sense to me. I think about Human Story 3 in a similar context, where it feels really hyper-ized in a lot of the emotions. Characteristics of the album in general are exaggerated or amplified. For me, that’s what brings in the futuristic qualities of it. It being really exaggerated and hyper relates to that Blade Runner time, where everything is exaggerated and in your face and overstimulated.

Are you familiar with Bronze skate videos? It’s a series of YouTube skateboarding videos influenced by the vaporwave aesthetic. A recent one included a song of yours.
The vaporwave thing to me has always been pretty weird but exciting. Since day one, it’s been someone else’s interpretation of my work. A record I’d made created some new micro-trend in music, a journalist hopped onto it and labeled it, and then I’m like the grandfather of this new thing and I don’t even know what they’re talking about.

For me, it’s always been this thing that’s cool, but I don’t really know what it is. I never really paid that much attention to it. I think vaporwave in a nutshell was that they took this conceptual framework of Far Side Virtual, a record I did, and took the musical framework of my friend Dan Lopatin’s [a.k.a. Oneohtrix Point Never] weird DJ screw and chop tape. They took both of those things and blended them together and that was vaporwave. A few aesthetic things I had going on at the time were sucked into that. It’s hard for me to even gauge the extent to which vaporwave is actually a real thing.

I think it’s totally a real thing, but unless you’re embedded in these subcultures — like experimental YouTube skate videos — you don’t encounter it so much.
Totally. It’s very specific. I’m not really into really specific, niche groups. I’ve always had an issue with that. My music for sure doesn’t function as music, per se. Of course it’s going to have a niche following, because it’s not something that exists on the universal principles of what we want music to function as. … [Where] we’re at, culturally, right now, you wouldn’t necessarily put on a record of mine to dance, but it’s actually changing. I’ve walked into parties and people have been playing my music, and that’s really interesting to me. I’m like, “Oh, the world’s changing.”

Where do you see yourself in ten or 15 years? What are you working on?
Before that ten-year period, I want to be working on large-scale productions, like operas or stage plays. I also want to be writing software in ten years. I want to use my artistic vision to merge [with technology] in a way that it can be experienced in music. I have ideas that could be albums, or could be software.