Review: Gucci Mane’s ‘Everybody Looking’ Is a Rap Comeback Like No Other 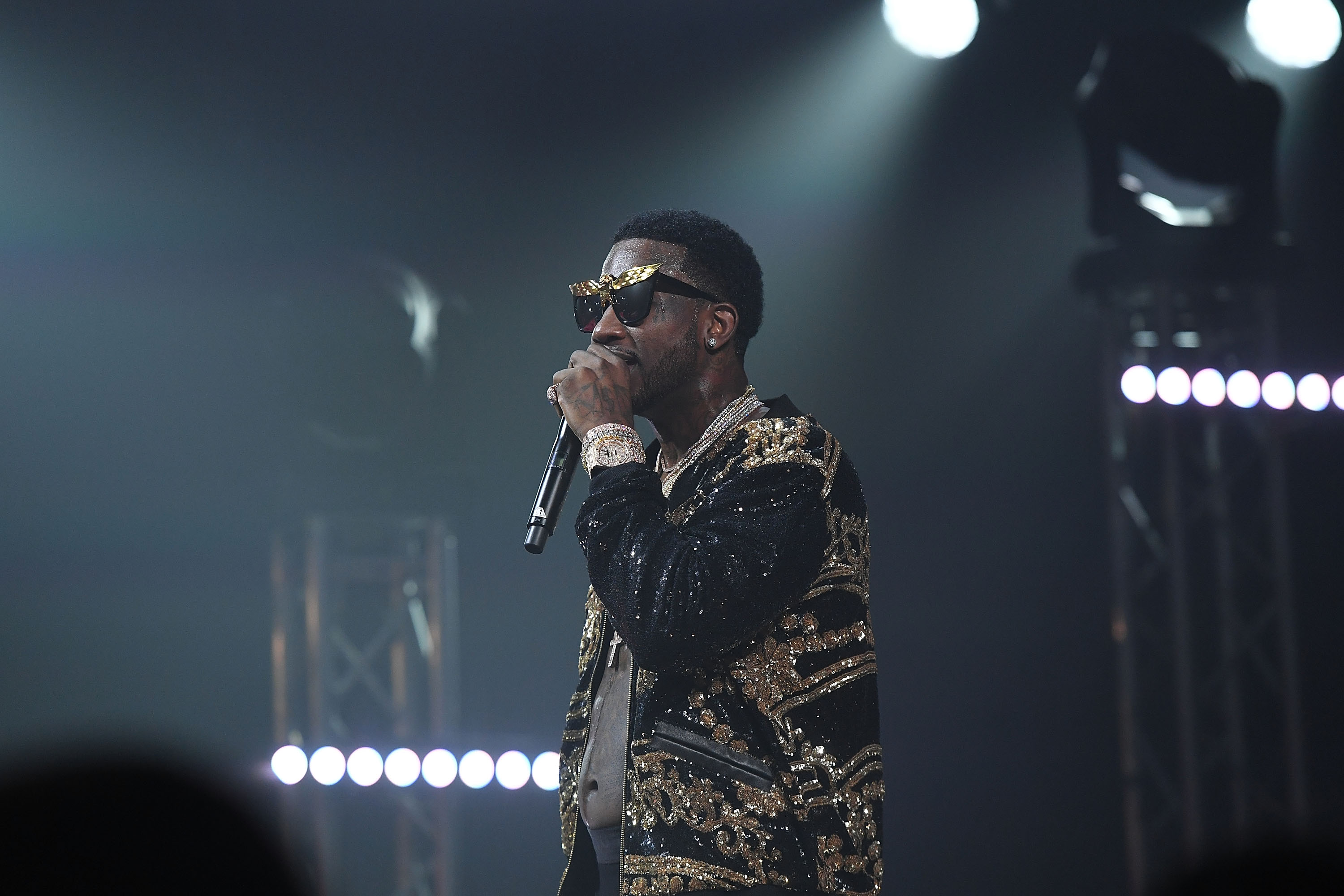 “I got the best intentions but I made rash decisions,” Gucci Mane raps on “No Sleep (Intro),” an unflinching, autobiographical look at how southern rap’s most beloved mushmouth nearly derailed his life. But Gucci, born Radric Davis, is back now, fresh off a two-year jail stint, looking and sounding like a million bucks. Though the Atlanta rapper’s new offering, Everybody Looking, is his ninth proper album, in many ways it feels like a recalibration of Gucci’s mission statement as an artist.

The last time it looked like Gucci Mane was going to blow up it was 2009, when he dropped The State vs. Radric Davis amid a storied maelstrom of mixtapes: Chicken Talk, EA Sportscenter, Ice Attack, Bird Flu, Gucci Sosa, No Pad No Pencil, and — last but not least — Gangsta Grillz: The Movie. Back then he was a charismatic D-boy with a penchant for wordplay and absurdist humor, legions of fans, and an iced-out Bart Simpson chain where his heart used to be.

But neither his label nor Gucci himself could quite figure out how to translate his idiosyncratic allure into pop success. His most memorable hits (“Wasted,” “Lemonade”) felt like extensions of his mixtape persona, while most of his attempts at crossing over via R&B collaborations— including several potential Radric Davis singles — fell flat. As the years passed, Gucci’s music became overshadowed by his erratic behavior, along with frequent arrests and subsequent incarcerations. There was BAYTL, the shocking collaboration with V-Nasty in 2011, and two years later he announced he was permanently changing his name to Guwop, and then broke a bottle over a guy’s head at a club in Houston.

After Gucci got locked up for a gun charge in September of 2013, though, something changed. He confronted his longstanding dependency on drugs and alcohol. He sobered up and shed a layer of bloat in the process. He unleashed an almost absurd amount of music from his vaults, and released collaborations with Chief Keef, Yung Lean, and — wish we were kidding — Andy Milonakis. And as he awaited his return, one-time proteges like Young Thug, Future, and Mike WiLL Made-It grew to become rap-industry heavyweights, rendering his influence over the genre more and more self-evident.

By the time Gucci was actually released, it felt damn near like a hip-hop holiday, a once-exiled despot coming to reclaim his crown. Everybody Looking is Gucci’s second chance, and he’ll be damned if he’s gonna waste it. If the old Gucci was at his best when he sounded completely effortless, the new Gucci tries, and he tries hard. There’s the same fresh-out-of-jail urgency here that Tupac once showed on 1996’s All Eyez on Me, combined with the succinct focus and regionality of a record like 8Ball & MJG’s ’93 debut, Comin’ Out Hard. There are no misguided attempts at pumping out a potential pop crossover, either — instead, Gucci and his primary producers, Mike WiLL and Zaytoven, have focused on doing what they do best, and at the highest possible quality.

There aren’t very many great rap albums that explicitly deal with how great their creator feels after overcoming addiction. Eminem’s Relapse and Recovery were mean-spirited and joyless in turn, while basically anything Macklemore has ever said on the subject has been too hectoring to bump in your car. But on Everybody Looking, Gucci both takes time to address his demons (“First Day Out the Feds,” “Back on Road”) and showcase his newfound clarity, not through preachy self-reflection, but by having an absolute blast.

Back in 2008, a line like “Elephant in the room / Guess who’s the motherf**kin’ elephant?” might have inspired an entire song — after all, Gucci once cut a track called “Atlanta Zoo” — when it shows up on “Pussy Print,” it’s a deadpan punchline he’s been free-associatively building toward for an entire verse. Still, it’s not that Gucci is any better or worse now that he’s on the straight and narrow. It’s just that where he was once drugged-up and delirious, he’s now sober and stunting. Think of it as the southern hip-hop equivalent to Tom Waits’ 1992 album Bone Machine, in which the newly sober hard-luck troubadour expanded his sound while reveling in his apparent influence on the younger generation.

Incredibly, Gucci wrote a good portion of the album in jail based solely off of text correspondences with Mike WiLL, who’d tell him about what he and Zaytoven were working on so that Gucci could write to it. That’s a testament to both Gucci’s genius as a creative entity, as well as the chemistry he has with Mike and Zay, who came together as something of an impromptu behind-the-boards duo for this record. All over Everybody Looking, you can hear the latter’s keyboard virtuosity humming alongside the former’s penchant for making beats as huge as possible. The result is unique, stadium-sized production that’s deeply rooted in Atlanta’s trap scene — after all, Zaytoven gave a sound to the term “trap” by producing Gucci’s “Icy” back in 2005, and WiLL got his foot in the door churning out beats for the rapper’s 2007 tape, No Pad, No Pencil. This guy gave them their start, and now they’re paying him back in a big way.

There are only three guests on Everybody Looking, and they all serve a purpose. Drake farts out a limp hook on “Back on Road,” Kanye spazzes out on “Pussy Print,” and Young Thug is all over “Guwop Home,” clearing space so that Gucci can proclaim that the word “Orange” stands for “Ol’ Rich-Ass-Nigga Gettin’ Everything.” The presence of Thug represents Gucci’s firm ties to the future of Atlanta hip-hop, while Kanye’s verse serves as a reminder that in rap, one can turn into a household name simply through eccentricity, uncompromising quality, and sheer force of will. (As for Drake, well, I lied. Drake serves no purpose on this album, other than to help people remember that Gucci Mane is a much better rapper than Drake.)

Everybody Talking might not be the very best record Gucci’s ever released — as much as everyone’s rooting for him right now, it’s hard to say whether this album can displace Chicken Talk or Mr. Zone 6 in his vast canon. But it’s by far the greatest cause for celebration in all of Gucci’s career; the iceman comebacketh.