Review: Dyke Drama Shed Tears and Shred Ears on ‘Up Against the Bricks’ 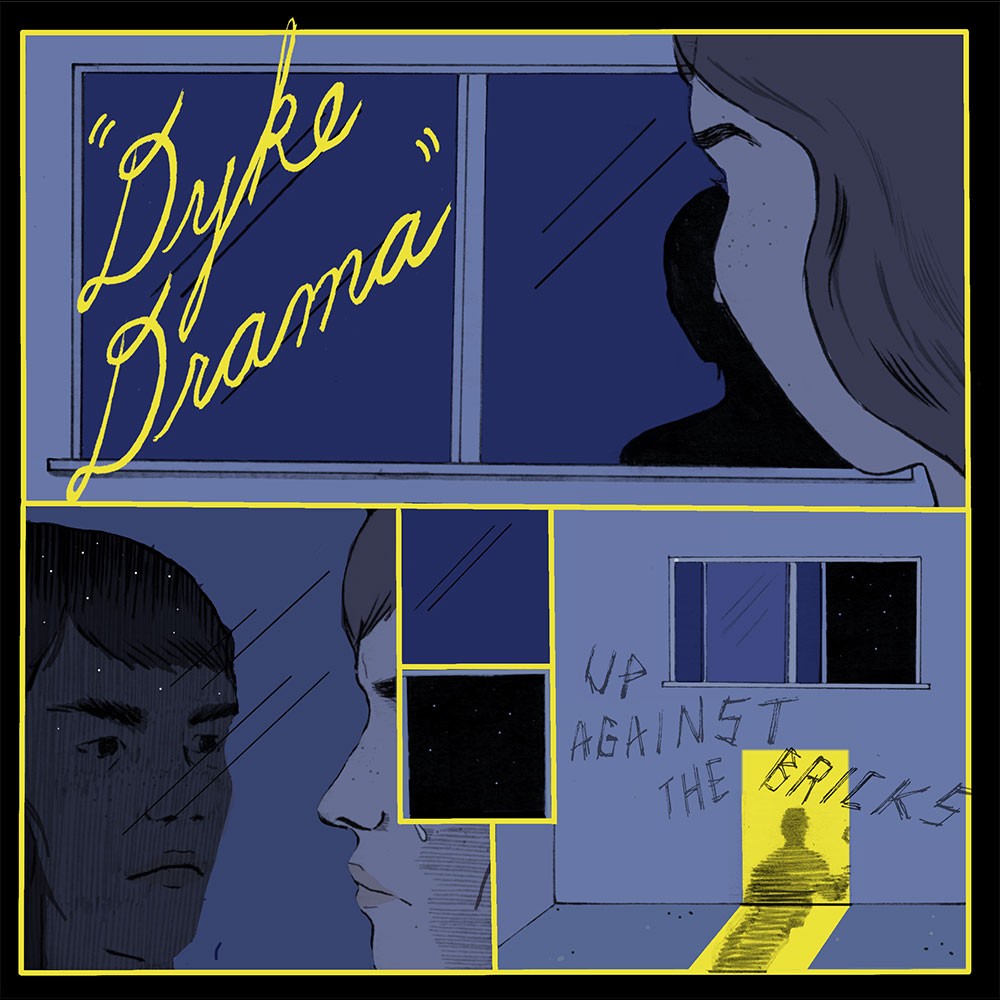 The stripped-down side project is a time-honored punk tradition, an outlet for musicians to elucidate their fury with greater clarity, or dive into topics that don’t necessarily fit the framework of their main squeeze. In a perfect world, these additional personas would complement an artist’s other endeavors, bringing greater depth and nuance to their overall musical output. That’s certainly what’s happening with outspoken firebrand Sadie Switchblade, whose two primary projects — political hardcore agitators G.L.O.S.S. and the Replacements-esque alter-ego Dyke Drama — are nearly at odds sonically. G.L.O.S.S. rattle the status quo with furious brevity: This year’s seven-minute Trans Day of Revenge EP favored microbursts of scabrous hardcore and unsparing vitriol (“The courts aren’t corrupt / Malicious, violent, they maintain control”), courtesy of Switchblade’s shredded howls.

But Dyke Drama’s songs, with their more conventional lengths, lean heavily toward ragged-sounding bar-band rock. Lyrically, they share the unambiguous, direct tone that G.L.O.S.S. take. “I don’t want to stop wasting my time on you / I don’t want to die living my life, living my life like a fool,” Switchblade sings on the jangly, midtempo “Say When,” from Dyke Drama’s debut full-length, Up Against the Bricks. Yet the alias gives the monochromatic screamer a chance to stretch her singing chops and dig into the intertwined complexities of the political, personal, and romantic.

On “Cis Girls,” she expresses distaste at being seen as “second best” or a “consolation prize” compared to the titular group, despite surface niceties: “You say I’m second-to-none, a cut above the rest / You say I’m second-to-none, but I’m still second to one.” On this song, the vocal shadings of additional singer (and Switchblade roommate) Erica Leshon are particularly effective, as the added repetition of the chorus and such phrases as “one of those girls” emphasizes the song’s portrayal of isolating otherness.

Elsewhere, a re-recorded, slightly more polished version of 2015’s “Crying in a Bathroom Stall” is a catchy and on-the-nose song about seeking refuge in the lavatory to grieve — really, who hasn’t been there? — and “You Can’t Count on Me” is an explicit celebration of being a proud artistic outsider. The latter starts with an almost gleeful cry of “F**k the music industry!” and establishes she’d “rather warm a bench than hang out in the major leagues.” Up Against the Bricks’ title track, meanwhile, longs for a bygone time when things weren’t necessarily simpler, but they were more optimistic: “Is it too much to ask for a moment that lasts for long enough to get it right? / For you to keep me up all night?”

Switchblade balances the album’s thematic heaviness with exuberant anthems that are even rawer than those on Dyke Drama’s inaugural 2015 EP, Tender Resignation. “Crying in a Bathroom Stall” and “Rolling Tears” are barnburners bolstered by twang-edged guitar, while both “Day-for-Night” and “You Can’t Count on Me” are marked with a sandpaper-rough veneer and sawtooth-ragged crunch. But most surprising of all is the prominent influence of alt-country on this record. “Cis Girls” feels like an homage to gritty Midwest road-warriors the Bottle Rockets, while a searing cover of Lucinda Williams’ “I Just Wanted to See You So Bad” boasts frayed riffs swathed in pleasing organ curlicues.

Up Against the Bricks ends up being most poignant on its simplest track, the searing closer, “Some Days I Load My Gun.” Switchblade doesn’t sugarcoat her thoughts of suicide, and even goes so far to contemplate about how people might react. “It’s not that I want to die,” she admits at one point. “It just gets so hard staying alive.” To underline this thought, the song ends with mournful, funereal organ drone and imperceptible, almost wordless singing. It’s a brave tune that once again establishes why Switchblade’s music resonates with so many — it’s her soul-crushing honesty. And her brutalist tendencies ensure that she can render a solo acoustic track just as powerfully as her thundering, ear-piercing punk. As implied by her sobriquet, there’s more than one knife in that arsenal for her to twist.