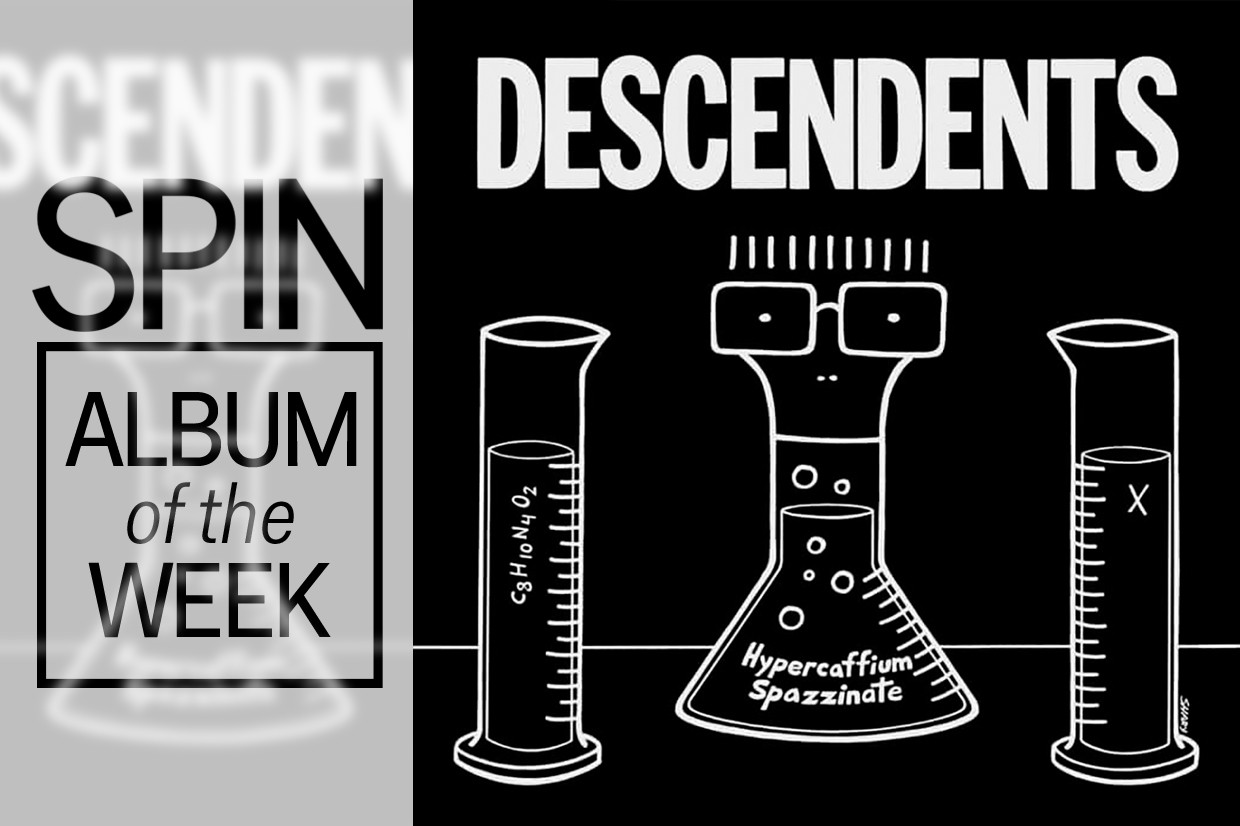 Descendents making an album for old people, by old people: It sounds like a bad joke, even by the SoCal ex-brats’ standards. For the better part of the band’s four-decade career, they’ve been the gold standard for puerility in pop-punk: When the best song on the new Blink-182 album is a nonsensical gag that’s shorter than an NBA shot clock, it’s because of the precedent Milo & Co. set 35 years earlier. In fact, it wouldn’t be a stretch to say that any punk band that’s less interested in social movements than bowel movements owes some debt of gratitude to the Descendents. But what to do when the band who once named an album I Don’t Want to Grow Up, now all in their 50s, can no longer ignore their own long-toothedness?

Hypercaffium Spazzinate, the Descendents’ first album since 2004’s Cool to Be You, approaches the problem pragmatically: just rant about old-guy s**t the way you once ranted about young-guy s**t. And so where frontman Milo Aukerman used to shriek for his parents to shut up already, now he’s the dad, infuriated with the way his son’s potential has been clouded with unnecessary medication (“Society don’t want to see you go for all!”).

Where the group’s fart-and-you’ll-miss-it sub-minute blowouts previously decried rock-star posers, now they spend their shortest songs worried about being helpless in the face of nuclear war (“We all sit back and accept it / Just a part of being alive”). And most stunningly for the band who initially described themselves as fueled by “rejection, food, coffee, girls, fishing and food,” the quartet has now been forced by age and history (“Grampa died at 45 / Heart attack and a triple bypass / Future’s looking very bright!”) to put down the weinerschnitzel, as sadly related on “No Fat Burger.”

It’s a gambit that works, largely because the group approaches their grown-up version of immaturity with the same snotty irreverence they once brought to songs about s**tting in the woods and making culturally inappropriate come-ons. The band sounds better than ever, too, mounting a muscular four-way attack that captures the immediacy of their frenetic synchronicity better than any non-live album of theirs to date. Aukerman’s formerly spittle-spewing screech has thickened over the years into something less guttural but more soulful: Over the shimmering leads of advance single “Victim of Me,” he sounds enough like Bob Mould fronting Hüsker Dü to make the lives of early-’80s college-rock survivors flash before their eyes. The Descendents’ energy never lags for 36 minutes; Hypercaffium Spazzinate is a hell of an argument for why proven punk bands should take all the time they need for their new album.

And it’s not like the whole record is Milo Goes to the AARP, either. Even at their youngest, horniest, and most outwardly vile, early Descendents set themselves apart by juxtaposing their adolescent missives with the disarmingly sweet power-pop of songs like “Hope,” “Silly Girl,” and “Get the Time.” Hypercaffium has some of the group’s best work from the latter camp, too. The major-chorded “On Paper” finds Milo begging to be judged not by his looks but his internet profile (“The real live me ain’t certified / But I look good on paper”), hilariously voicing the self-defeating insecurities of just about anyone who’s ever found solace in OK Cupid resumé distillation. “Without Love” is practically Springsteen-esque in its chiming musical mushiness, which, combined with the death-and-divorce imagery of the lyrics, matches the previous album’s “She Don’t Care” as the group’s most heartbreaking love song yet.

But best of all might be the set’s closer, “Beyond the Music,” which addresses a subject the veteran punks have never dared to undertake before: the band’s own story. The song charts the group’s timeline — primarily Aukerman and co-founding drummer Bill Stevenson — from dumb teens who “set our course for any way out / Prayin’ that the van wouldn’t break down,” to old friends “still finding ways to share what we feel / For kids with no friends, it doesn’t seem real.” Milo ultimately concludes on the tearjerking final chorus: “Frustrato-rock or chainsaw pop, or whatever it is we play / This is our family, and it will always be this way / Beyond the music.” With sentimentality that would risk becoming mawkish if it didn’t get in and out so quickly, the song suggests that as challenging as it may be to thrive as an aging band of former enfants terribles, it’s still something worth fighting for. Hypercaffium Spazzinate suggests it might not even be all that impossible.