Taylor: "After the song comes out, I'm gonna be on a Grammy red carpet and they're gonna ask me about it, and I'm gonna be like, 'He called me'" 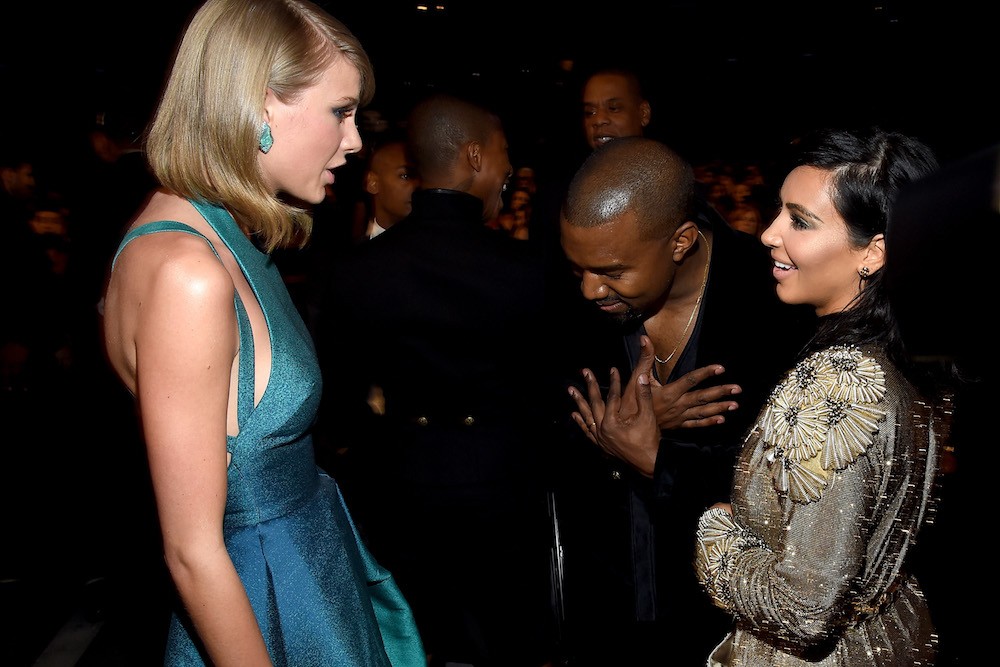 An early welcome to your pop news cycle of the week: Yes, Kim Kardashian actually has taped footage of the phone call her husband Kanye West supposedly — guess we don’t really even have to use that word anymore — had with Taylor Swift to get her approval for use of her name in The Life of Pablo song “Famous.” The discussion that West and Kardashian long insisted had transpired between the two pop planets over the song’s content is now (partly) available for your viewing pleasure.

That controversial “Famous” lyric, of course, had Kanye hypothesizing, “I feel me and Taylor might still have sex, why? / I made that bitch famous,” and Taylor’s only public response to it thus far had been denying through a rep that such a conversation ever took place, and subtweetingly decrying people who “take credit for your accomplishments, or your fame” when accepting the Album of the Year award at the 2016 Grammys. But now, Kim has shared the smoking gun.

In a Snapchat story leaked by Kardashian that encompasses about three minutes’ worth of conversation — you can watch it below, courtesy of tweets from @TeamKanyeDaily, via Pitchfork — you can hear Kanye informing Taylor about the “might still have sex” lyric, and Swift reacting mostly positively, saying, “I’m really glad you had the respect to call me and tell me that as a friend… I think it would be great for me to be like, ‘Look, he called me and told me about the line before it came out. Joke’s on you guys, we’re fine. You guys wanna call this a feud, you wanna call this throwing shade…’ but right after the song comes out, I’m gonna be on a Grammy red carpet and they’re gonna ask me about it, and I’m gonna be like, ‘He called me.”

Taylor even acknowledges the relevance of Kanye’s lyrical point, saying “You gotta tell the story the way that it happened to you, and the way you experienced it… It doesn’t matter that I sold seven million of that album before you did that — which is what happened — you didn’t know who I was before that, it’s fine.” Meanwhile, West’s performance in the video is downright Boy Scout-ish, as he preaches, “Relationships are more important than punchlines,” and “I just had a responsibility to you as a friend.”

PART 1: Kanye calling Taylor Swift to tell her about the #FAMOUS lyrics. Courtesy of KKW. pic.twitter.com/TIiqxxzLUh

PART 2: Taylor agreeing to tell the media she was in on the #FAMOUS lyrics from the beginning. 🎥: KKW. pic.twitter.com/PbXUnGreas

Of course, it’s still a heavily edited video — just three minutes of what Kanye has called an hourlong conversation — and Taylor has already responded, claiming that the footage doesn’t tell the whole story. “Where is the video of Kanye telling me that he was going to call me ‘that bitch’ in his song?” Swift asks in an Instagram post captioned “That moment when Kanye West secretly records your phone call, then Kim posts it on the Internet.” She answers her own question: “It doesn’t exist because it never happened. You don’t get to control someone else’s emotional response to being called ‘that bitch’ in front of the entire world.”

Taylor goes on to say that Kanye “promised to play the song for [her], but he never did” and thus she was unable to ever actually approve the song. “Being falsely painted as a liar when I was never given the full story or played any part of the song is character assassination,” she concludes. “I would very much like to be excluded from this narrative, one that I have never asked to be a part of, since 2009.”

Of course, Taylor is unlikely to get that last wish granted any time soon, and this narrative will inevitably be a discussion that all fans of pop culture are going to now be having this whole week. It’s gonna be a long one and an exhausting one, so hope everyone got a good night’s sleep.

That moment when Kanye West secretly records your phone call, then Kim posts it on the Internet.