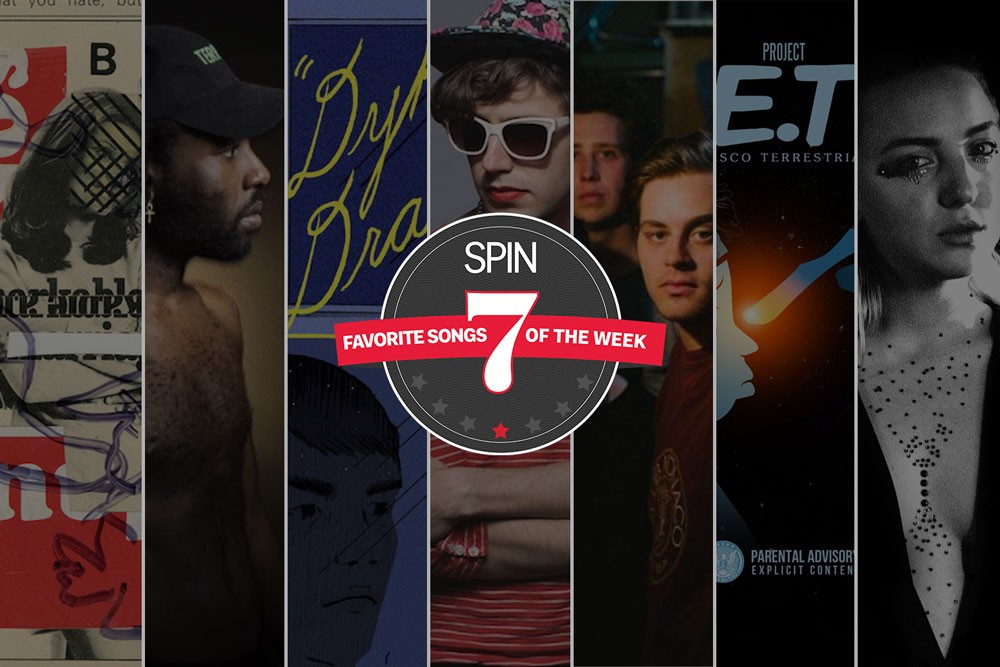 Welcome to our weekly roundup of the SPIN staff’s favorite new songs. Below, sample the best from New York experimentalists, atmospheric R&B aficionados, and more.

Black Dice, “Big Deal” (L.I.E.S.)
Bands certainly evolve in strange ways. Just try tracking Black Dice from the burnt-foil ambience of 2002 debut Beaches & Canyons to this strange six-minute jam that recalls no one so much as Ween trying their shaky, drug-addled hand at Lynyrd Skynyrd chords and coming up somewhere in Dandy Warhols town. (The Dandy Warhols are the nexus of everything. There, that’s their next album title.) — DAN WEISS

Blood Orange, “Desirée” (Domino)
The majority of Blood Orange’s projects are wrapped in nostalgia — not the idyllic sort but the sad, longing kind. Freetown Sound, openly aware of America’s devaluation of black and queer bodies, comes with an added weight. “Hands Up,” an airy, mid-album highlight, epitomizes this tension with its dichotomy. Hynes’ lyrics read both as a letter to a former lover’s crippling loneliness (“Are you sleeping with the lights on baby?”) and a warning against a mortally broken system (“Keep your hood off when you’re walking,” he sings, a clear reference to Trayvon Martin). Although the causes are different, it’s clear the wounds stem from a lack of empathy. — BRIAN JOSEPHS

DJ Esco feat. Future and Lil Uzi Vert, “Too Much Sauce” (Self-Released)
If Future is on the downswing, it’s hard to tell on “Too Much Sauce,” a Zaytoven-produced cut from DJ Esco’s Project E.T. Esco Terrestrial mixtape, which could easily pass as an outtake from last year’s exceptional Beast Mode. Future shares billing with up-and-comer Lil Uzi Vert, as Zay’s continuously moving piano solo sweeps beneath them. Future and Zaytoven have the longstanding chemistry (obviously), and they feed off of each other, but it’s Uzi who feels most at home, stealing the show with his infectious wails. — SHELDON PEARCE

Dyke Drama, “You Can’t Count on Me” (Self-Released)
“F**K THE MUSIC INDUSTRY!!” Sadie Switchblade shouts before launching into an absolute avalanche of a six-string assault. I mean, yeah — how the hell has it not given us anyone since the Replacements three decades ago that wrote riffs like this? Choruses like this? SHOUT-ALONG backing vocals like this? Maybe because it’s just not a sustainable way to rock: “We really don’t give a s**t / Ya better not count on it,” Switchblade cautions. Treasure these moments while she’s still within our reach. — ANDREW UNTERBERGER

Ezra Furman, “Teddy I’m Ready” (Bella Union)
Ezra Furman begins “Teddy I’m Ready” singing about anxiety and wanting to be anywhere but here. By the final minute, you’ll be so jacked-up on rock’n’roll sax you’ll feel like you could stage dive into a herd of unicorns. In between, there’s a naked mole rat, a shoutout to Ted Hawkins, and Furman’s nasally, knowing ache. Teddy, we’re ready to rock’n’roll. — ANNA GACA

Hoops, “Cool 2″ (Fat Possum)
In Ariel Pink’s absence, there’s Hoops — a Bloomington, Indiana four-piece that specialize in hazy, daydreamy guitar-pop, topped with homespun, tin-can vocals. On “Cool 2,” a brief but delicious taste of the band’s August-due EP, Hoops deliberately don’t overstay their welcome (“We like it because it is short, but it also represents what we want to do as a band,” they’ve said of the track), but they will make you shiver for more. — RACHEL BRODSKY

Lowell, “High Enough” (Arts & Crafts)
Almost a year after her spastic, stomping collaboration with Icona Pop, Toronto singer Lowell returns with a subdued quasi-ballad that only erupts when the wordless chorus swings into motion. As we’ve learned from rising stars like Kiiara, pop songs no longer need lyrics to sound amazing. Syllables will suffice. — MATTHEW MALONE