The actor's new song is his second off of his upcoming debut album, 'Down in a Hole' 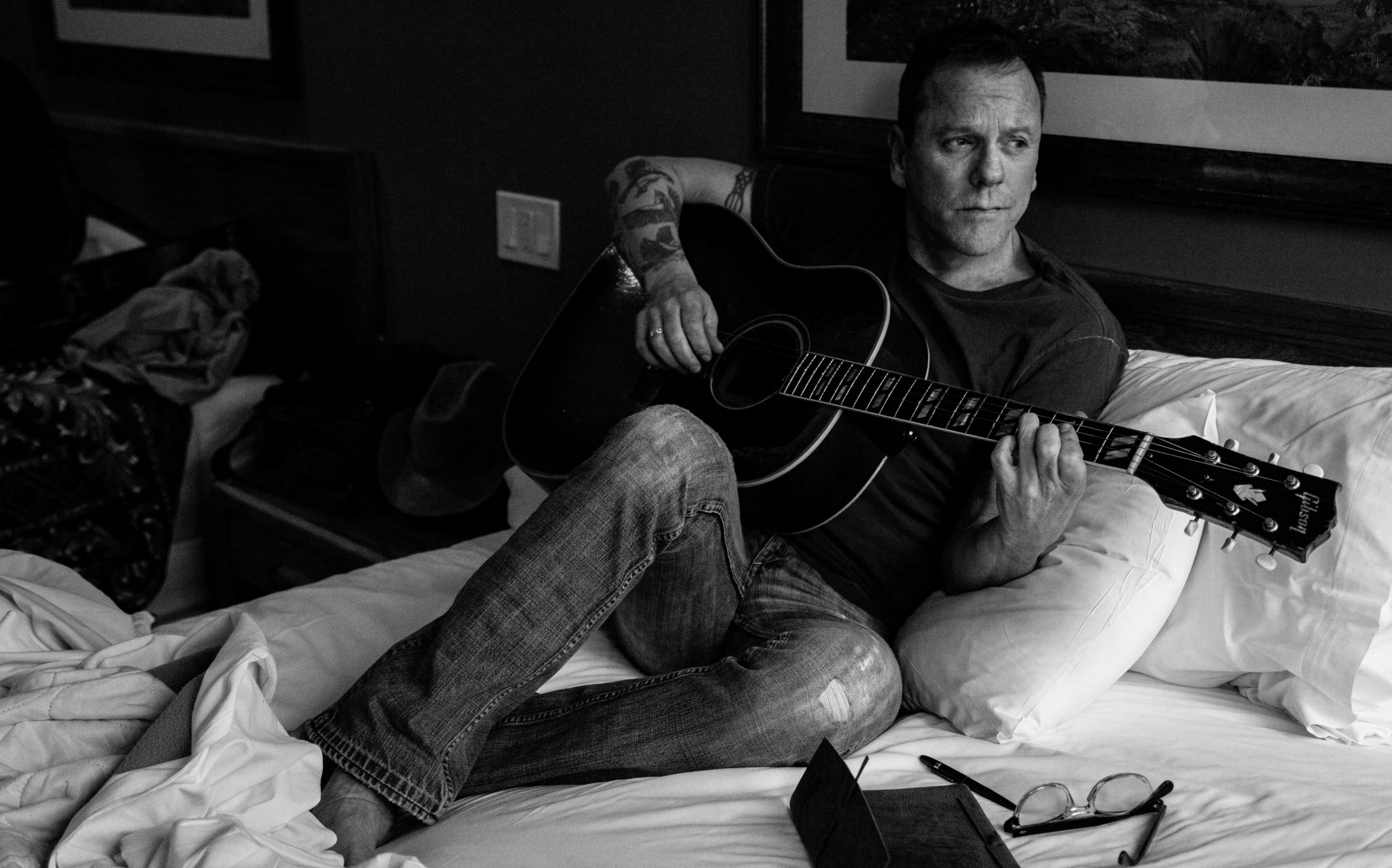 For a man who’s spent a three-decade career playing vampires, assassins, Musketeers, and counter-terrorist agents, performing the role of a country-music singer would seem like a relatively low-stakes gig. But it’s a particularly anxious one for Kiefer Sutherland, because this time he’s not acting: The former second-wave Brat Packer and 24 Emmy winner is releasing his debut album, Down in a Hole, at the age of 49, and he’s using it as an opportunity to be more honest in his new craft than he’s ever been able to in his primary gig.

“Going to play [these songs] live, the thing that I would like to be able to do is to tell, ‘This is where I was at when I wrote this song,'” Sutherland explains to SPIN over the phone from Nashville. “And then I realized that would require me to open up in a way that I’d never really done in my career, [where I’ve] kept my own personal life as private as I possibly can. And I ended up kind of going for it.”

Down in a Hole is expected to see release later this summer, and today, we’re premiering the album’s second single: the Bob Seger-rollicking, hard-lived head-nodder “Can’t Stay Away.” Check out that song below, as well as our full interview with Sutherland, where he discusses the song’s true meaning, developing his roots in country music, and teaching River Phoenix how to play a Ben E. King song on the guitar.

What are your earliest music memories?
I had a brother who was seven years older than I was and I absolutely idolized him. I wanted to play the sports that he played. I wanted to be like him and he was, lucky for me, a huge music fan and so I would listen to everything from the Beatles, Elton John, to Aerosmith and AC/DC. Primarily rock stuff, but I always made a joke that I was probably the only third grader that was listening to Aerosmith.

What did your parents think of that?
Well, I grew up with my mom, and she was fine with that, but she made me start playing violin when I was about four. Then I wanted a guitar real bad when I was about seven, and she said, “Well, you gotta play violin till you’re ten and then I’ll get you a guitar.” So I did, and then the second I hit ten, she got me a guitar, and I never played the violin again.

Were you in bands in school?
I was in a couple bands but they were kind of silly at best. We played a couple high school shows and things like that. But the guitar was really important to me, and something that I really focused on, so that’s something that stayed with me all the time. It wasn’t something I necessarily played in a lot of bands when I was 16 or 17 years old. It was something I would come to do later.

So there was never a thought of “Maybe I’m gonna do this professionally instead of acting”?
No, because I started working [as an actor]. I fell in love with acting, and I was acutely aware of the stigma of an actor doing music, so it was something I would have had to make a choice to do very, very early, and the truth is I loved acting, and still love acting. The common denominator that I found for myself now with regards to my music is that I love telling a story. The lyric is what drives the song for me.

But certainly through my 20s and my 30s, music was really something I was a huge fan of and that I would play by myself. It wasn’t something that I shared with a lot of people, and [singer/songwriter/producer] Jude Cole, who I made this record with, is also my best friend. He and I started a label called Ironworks right around 2001, 2002, and we had that for about ten years. And it was by being surrounded by all of those artists that my writing started to pick up a lot more.

So it was really in this last ten years that I started to write a lot, still having no intention of making an album. I took a couple songs to Jude, and said I wanted to record them, maybe send them off to BMI or Sony and see if another artist would be interested in doing them. And he convinced me to record a couple more songs, and a couple more songs, then I think it was around the sixth or seventh song that I had to have my “Come to Jesus” moment, where I realized I really liked the way they were sounding, too. And [I had to ask myself] was I willing to stand and defend this, and was I in a place where if people were gonna say really nasty things about it would I be able to handle that? And the truth is I’ve gotten to a place in my life where I could, and so we went forward.

When did you start listening to country music?
I roped on the USTRC circuit. I was a team roper and I roped with a bunch of guys, all really great cowboys. And we would basically go from town to town — get into town that Thursday, you’d have that rodeo. Sometimes you’d be in two or three rodeos at the same time. You just do a lot of driving and in that pickup, that’s what they were listening to.

And they were listening to original outlaw country, which was Johnny Cash, Waylon Jennings, Merle Haggard, Kris Kristofferson. And those guys wrote in the first-person narrative. For instance, I don’t believe that Johnny Cash went to Reno and shot a guy to watch him die. But he took on that character, and I had such a visceral reaction to that, because that’s the wheelhouse of an actor. And so I just fell in love with that style of music.

Having said that, when I started writing my songs I was writing in the first-person narrative as well, but it wasn’t a character, it was actually stuff that had happened to me in my life. And I think I was writing at that point almost for the cathartic benefit of maybe working through some things for myself, and those ended up being the songs that we used for the record.

Did you have a favorite of the big songs that were attached to the movies you made in the late ’80s and early ’90s?
Well, two different stories. Stand By Me, I was teaching River Phoenix how to play [the Ben E. King song of the same name] on guitar, and at that time, Stand By Me was called The Body, and Rob Reiner was sitting next to us when I was teaching him how to play it. I certainly don’t know if that’s why the movie was called Stand By Me in the end or not, but he certainly did take an interest in us playing it, and remembered how much he loved the song.

What was the inspiration for you teaching River that song? Was it already on the soundtrack?
No, it wasn’t on the soundtrack at all. I think I’d just learned to play it myself, and I was just playing, and he said, “Oh, can you show me that? I really like that song.”

And then, “Blaze of Glory” [from Young Guns II] is one of my favorite stories. Not many people know this, but, on Young Guns I, Emilio [Estevez], who was friends with Jon Bon Jovi and Tom Cruise, they all made cameos in the gunfight. We shot Tom Cruise off a roof. I think we shot Jon Bon Jovi in the street, but they all had beards and wigs on so you would never recognize them. And we were all out to dinner and Jon had told Emilio,”I really wanna do the music for the sequel,” and Emilio said, “We don’t even know if there’s gonna be a sequel yet.” And Jon looked at him and said, “Trust me, there’s going to be a sequel.”

And so the rest of us were having a bunch of drinks, and Jon was just ferociously writing on these napkins. And he pushed the napkins toward Emilio in about 20 minutes, and he said, “That’s the first song.” He had written “Blaze of Glory” in the bar. And I remember in Montana, after the [second] film was done… I wasn’t even aware that Jon was doing an album for it. I’m in some store buying something for my stereo and they’ve got all the TVs on and the [“Blaze”] video came on and I was like, “Oh my God! That’s awesome.” And those three napkins are framed in Emilio’s house today.

Do you listen to modern country music?
I have to be honest, I probably listen to more what is considered old-school country, or at least original outlaw country. But for instance, that Chris Stapleton record, Traveller, and actually the record before that, are extraordinary. And again, as much as his voice is off-the-charts beautiful, the lyrics that he writes have profoundly affected me. There’s some Keith Urban stuff that I really like. I think that he writes incredible hooks, and he’s such a brilliant player. So there’s plenty of people that are making country music now that I have a great deal of respect for.

Are there any stories behind “Can’t Stay Away”?
Well, the funniest thing for me — and I promise you this is not Father-of-the-Year-Award material — but a bunch of people that heard the song when we first recorded it, almost seven years ago, were making fun of me, going, “I love that song but who’s the girl? Who’s the girl? Who’s it about?” And my daughter was in the room, and I said, “It’s not about a girl.”

They all walked out, and my daughter was looking at me kind of crooked. She said, “I know what that song is about. That bar up the street.” And I smiled and said, “Little girl, you are too smart for your own good.” And it was. It was about a bar called the 4100, up the street from me. And those opening lines, “Walking in the wrong direction, though I should be walking home / Smart enough to feel much better / Ain’t nothing left to be alone and stay way.” It was about a bar.

Was there a particular sound you were going for with the song?
The way that song was written, Jude had come up with a guitar lick. We had just moved into the studio and I wanted to go to the bar and have a drink. We had just been moving all day, and he said, “Aww, I wanna finish this. I really like it.” So I wrote the lyrics in literally 15 minutes, to get his ass to the bar.