If you’ve heard BRONCHO before, it was most likely “Class Historian,” a song whose irrepressible “dah-dah-do-do-do-do” opening is a brain-sticker of the highest order. If you were sufficiently intrigued to listen to the rest of 2014’s Just Enough Hip to Be a Woman, you would have found an album chock-full of similarly punchy, perky hooks. The Oklahoma quartet’s heady blend of new-wave pop and garage fuzz stood out, distinguished by frontman Ryan Lindsey’s androgynous, elastic vocals and a sticky strum that could be called BRONCHO’s signature guitar tone.

Their third full-length, Double Vanity, finds the group in a slightly different mood: slower, steamier, denser. The hooks are still there, buried under hairpin-bent notes and a blanket of reverb that would make anyone but the Jesus & Mary Chain blush. “I want to get you when you’re off,” Lindsey teases in “Fantasy Boys,” three heavenly minutes of homoerotic beach jam. “I Know You” is a billowing pop song with with proto-punk bones and Spectoresque production, while “Speed Demon” recalls the Raveonettes’ early days as leather-jacketed, motorcycle-riding outlaws.

Innuendo and double entendre are core BRONCHO values; even the album’s title, Double Vanity, is simultaneously a wink at narcissism and a type of dual-basined bathroom furnishing. (The band’s home base, a rented warehouse in Tulsa, formerly housed a manufacturer of sinks and Jacuzzis.) Nowhere do they lay it on thicker than “Señora Borealis,” a strutting, hip-shaking anthem infatuated with its Dallas’d-up Jackie Brown anti-heroine. Her weapon of choice: a reworking of a childhood classic about low-hanging ears that wraps with the lines, “Over shoulder with a boulder holder / You can whip it on the cops.”

Below, listen to the premiere of the echoing, shakin’, fever-dreamin’ Double Vanity (out June 10from Dine Alone Records) and read a Q&A with Lindsey, 34, whom SPIN reached by phone in a Houston Whole Foods parking lot to talk about his start with his brothers’ high-school band, the evolution of BRONCHO, and the ambiguous sexuality of his lyrics. 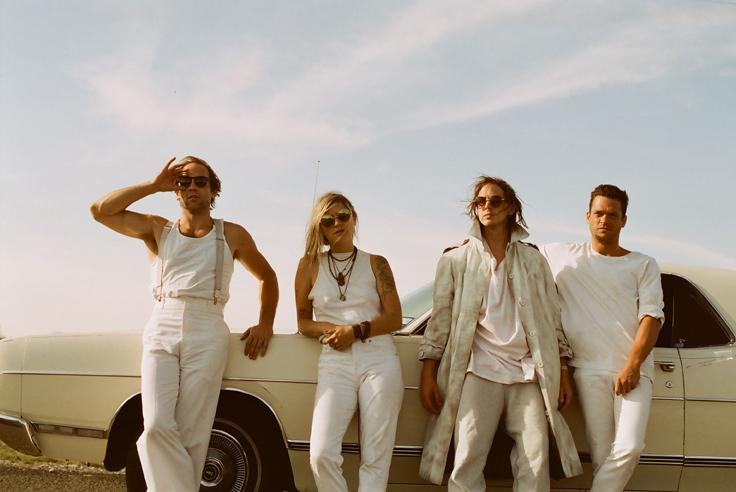 Broncho’s Psych-Pop Innuendo Is Stronger Than Ever on “Sandman”

You have a really distinct singing style. Is that something you worked to develop?
I think it just turned into [that] as we kept playing more and more shows. I feel like I’m more of a character type of singer — I can sing differently depending on what I’m up to. Specifically with BRONCHO it became its own animal due to touring so much. Being in that type of environment every night turned it into what it is now. I let whatever character was in that song take over and come out. It’s really something I’m figuring out as time goes by, it’s not anything that I plan on.

Do you ever write songs as someone else — someone who’s a different gender, from a different place, in a different stage of life?
I don’t ever set out to do that. I come up with a melody, and lyrics seem to find their way into whatever melody I’m singing. I don’t really set out thinking I want to write a song about a specific person or a specific walk of life. I like being open to whatever the song needs. If the songs needs me to be feminine, I’ll be feminine.

Some of your lyrics seem to have queer themes, especially songs like “Fantasy Boys” and “Jenny Loves Janae.” Is that something you had in mind while writing?
I think that’s there for sure. “Fantasy Boys” can be taken multiple ways. I like being inclusive. If someone can take it that way, and it benefits them, I love that that’s there. I also think it can be taken like, “I just want to hear what all the boys’ fantasies are.” [Laughs.]

“Jenny Loves Janae” is probably the most obvious; I’m definitely talking about a lesbian couple, for sure. I like taking breaks from ambiguity to really just tell a story. That’s a song that we wrote when we were working on our last record. It was one of the last days that we were tracking, but it didn’t make sense yet and that’d always been on my mind. It really made sense this time around, which I’m glad about. It’s one of my favorite songs on our record.

Are there any other songs on Double Vanity that were written but didn’t fit last time?
Yeah, “Highly Unintentional” is one. I kept trying to make sense of it. This record it just kind of worked out, in the same vein as “Jenny Loves Janae.”

Honestly I think a lot of it is tempo. From the first record to the second record there was a tempo change and things got slower, but the really slow songs I don’t think we could pull off until this record, when everything was a lot slower. The goal is to slow things down but still have as much energy, and in a lot of ways I think it has more energy than previous records. Maybe it’s more of an emotional energy. Not necessary emotional lyrically, or idea-wise, but just melody- and sound-wise. There’s more emotion to me when I hear this record than there was on previous records.

Were there any classic acts you listened to in the background while you were making this album?
I think for me it’s more music I’ve been hearing over my whole life. My parents were listening to a lot of mainstream folk music like Simon & Garfunkel and James Taylor, and a lot of Beach Boys. Those people were just writing tons of hits, and those melodies were always in my mind.

When I started getting a little bit older, my bothers were listening to ’90s grunge/punk stuff. It was a different form of writing hits, it was kinda dirty — the production was crazier and at first I didn’t get it. But my brothers just kept listening and I really started to hear the songs. That was a huge influence on me, hearing the different ways that you could write a pop song. Rather than just this one way I heard growing up, all of a sudden there were these other ways, and the rules kind of changed.

It’s got to be funny to grow up looking up to your older brothers, thinking they’re cooler than you, and then turn out to be the lead singer of a band.
I think they get a kick out of it. They had a band together [in high school], and I went to a couple of the shows. I would help wrap up cables, you know, carrying stuff, [as the] voice-cracking younger brother. Just wanted to be a part of it. But they were cool — they let me hang out, made me feel cool. That was a huge influence.

How did you go from helping out to playing music yourself?
I’d always loved performing, like in school productions, as a kid. When my brothers started a band, it was like the way-cooler version of performance. My oldest brother moved off to college and my middle brother said if I bought a bass, I could play bass in their band. So I started playing bass, and that’s really where I started writing.

Tell us more about your band warehouse.
We started renting this warehouse in this industrial park west of downtown in Tulsa, down by the river. We found this real beat-up old warehouse real cheap. They used to make Jacuzzis in there, so there’s this resin all over the place. It looks kind of like cupcake frosting … like somebody took a frosting gun and decorated a real dirty cake.

Out back there’s all these molds where they’d make the Jacuzzis, and then there’s some actual Jacuzzis they left behind. There’s sinks — they made sinks and countertops. They left everything behind. They left these giant tables. We turned the tables into a stage and then threw a show in there.

The list of bands BRONCHO has opened for is pretty diverse: Billy Idol, Mission of Burma, Cage the Elephant, Social Distortion. Do you change how you perform a song live if you’re opening for Billy Idol versus Social Distortion?
Social Distortion and Billy Idol, those crowds are pretty similar. We would keep things uptempo, and try to get in and out of songs real quick. Cage the Elephant’s is kinda a groovy crowd, so we play a lot of stuff from the new record, which is slower, and they seem to get into that more. The first couple shows we played more of the rock’n’roll stuff that we thought would make more sense, and there was a lot of staring. This one guy kept sneezing. But the nicest thing about having three records is that we have more options. It’s a lot more fun to play a show that way.