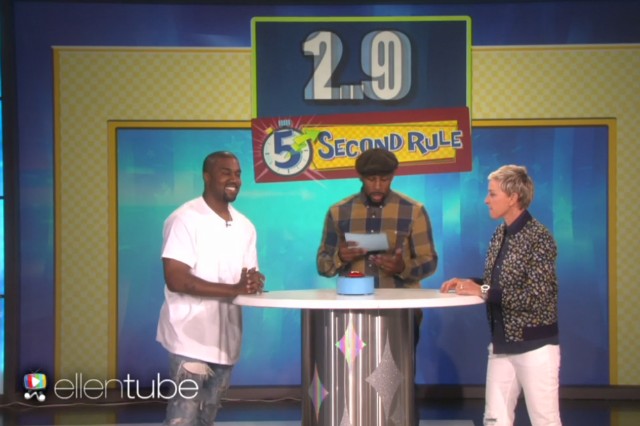 Kanye West appeared on the Ellen Degeneres Show yesterday, and it started out innocently enough, with him discussing his kids and his Twitter usage. (No, Ellen, he would not prefer a “Board of Directors” have the final veto on his tweets.)

Then everything went Kanye: He passionately discussed fashion as an issue on par with the environment, theorizing that working with Payless on making new designer threads for kids could help stop bullying. He continued his plea to the Zuckerbergs that teaming up financially could help make the world a better place. He saluted Phife Dawg, trashed the tone-deaf Oscars, and name-dropped his buddy Obama, along with usual regulars of his diatribes: Walt Disney, Steve Jobs, and Michael Jackson. Of the latter, he theorized that someday people will be calling him Wacko Kanye. He apologized for his realness. At one point, Ellen referred to The Life of Pablo as a CD.

Then they played a game of “5 Second Rule” and, tasked to name three things that are hairy, he responded “Balls, balls, balls.” Watch the segments below.