Garbage’s Shirley Manson: ‘Be Flawed, Be Fragile, Be a Mess’

Home » Features » Interviews » Garbage’s Shirley Manson: ‘Be Flawed, Be Fragile, Be a Mess’

Garbage frontwoman Shirley Manson is boiling eggs and hiding out in her Los Angeles home when she picks up the phone. “A policeman apparently discharged his weapon outside early this morning,” she says. “[There’s] news craziness ’round my house, it’s all cornered off. It’s like an episode of CSI… It’s so L.A., you know?” As bemused as Manson sounded a few seconds ago, she’s quickly laughing about the pandemonium taking place beyond her front door.

Such unplanned disturbances — personal or not — rarely distract her anymore. That might be related to the fact that the cotton-candy-haired singer is turning 50 this year. “Now that I’m older, I realize my time is ticking,” she says. “I suppose I feel a sort of urgency that I didn’t feel before and some clarity about what my job is. And once I figured that out, everything has sort of fallen into place.”

One thing that’s settled is the method by which she and her band — bassist/guitarist Duke Erikson, guitarist Steve Marker, and drummer/producer Butch Vig — now release music. After distributing four razor-edged alt-pop records — 1995’s Garbage, 1998’s Version 2.0, 2001’s Beautiful Garbage, and 2005’s Bleed Like Me — via outside parties (Australia’s Mushroom Records and later its absorber, Warner Bros.), the quartet has since launched their own imprint, STUNVOLUME, through which they shared 2012’s Not Your Kind of People and, in a few weeks, will put out the follow-up, Strange Little Birds, which drops on June 10.

The switch has freed Garbage from any unnecessary record-label meddling and made it possible to refine their sound — a brooding mix of glossy rock, electronic, and pop elements — and even revisit their ’90s aesthetic on new tracks like the emotionally hollow “Empty.” Below, Manson comments on a few lessons she’s gleaned over the course her lengthy career, like learning what it means to face your mistakes, embrace your flaws, and evolve your music in the face of a “corrupt” industry. 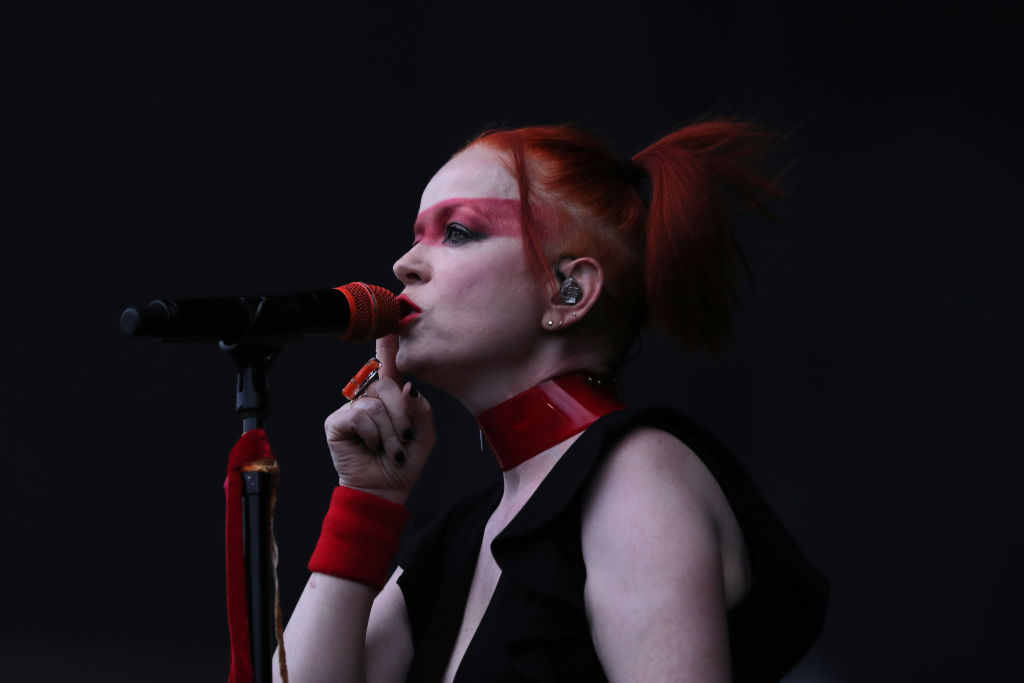 Once I figured that, my ambitions sort of started to bloom. [Laughs.] I know that sounds so pretentious and stupid but, at the same time, it really was a profound realization for me. So when we went to make this record, I was thinking, “Well, what if I die tomorrow? What would I like to leave behind? Some testimony, perhaps.” When I stepped up to mic on our last tour, for Not Your Kind of People, I had this sudden flash in my brain of like, “Why every time when you step up to the mic are you so defended?” I always feel like I’ve got some armor on, and I’m there to repel in a way an imaginary force.” And I determined right there and then: I was like, “Okay, you need to figure this out and be prepared to be a human being. Be flawed, be fragile, be a mess. You don’t have to put up this front of always knowing exactly it is where you’re going.”

Anyone can fake a smile.
We feel that in social media, every woman is photographing themselves from the same angle with the same head position, because that allegedly is the most attractive way of having a selfie taken or a photograph taken, and after a while everyone starts to look the same. Nobody is really admitting to any fault or reasons or mistakes they made. It’s not bragging per se, but it’s certainly a sort of posturing display of success or happiness or well-being, and it’s all started to feel a little hollow to me. Everybody’s straining to be perfect, and I just don’t think that’s what makes human beings interesting.

It’s really hard to face up to mistakes.
And yet, it’s only then that you really learn not to make that same mistake again. Until you really know it was a mistake and what was at play, you’ll just keep repeating your f**king mistakes. A mistake is a moment of growth and learning if you’re listening.

It’s good for your work for you to be an outsider.
We’ve been told for decades now that the guitar is dead and we were just like, “Oh, f**k it! Guitars are amazing! We’re gonna focus on guitars.” We were told like, “Nobody plays alternative women on radio anymore.” And we were like, “Well, f**k it! Who cares? We’re just gonna make a good record anyway.” It’s a real record of defiance, in a funny way. In being defiant, we sort of found ourselves back where we started, which was on the outside.

Don’t worry about whether you’ve made the right choice.
Anyone who doesn’t experience moments of doubt is an imbecile. You have to be brave enough to be willing to make a choice and then live with the repercussions of your actions. And there will always be negative and positive repercussions to every choice, no matter how good the choice is, there will still be some negative fallback from that. I think a lot of people get paralyzed when they have to make a choice ’cause they think there’s a right choice and actually there is no right choice, in my experience. So go ahead and make the choice that feels right for you. You might stumble, you might get some mud on your face, you might get kicked in the teeth, but you will survive.

Every band has to find its own dynamic.
What has been one of the greatest tools at our disposal is everybody in Garbage has succeeded at managing their egos. And everybody has a big ego. Even people who you’ll think [are] shy and quiet, their ego is as big as the person who walks in with the loud voice. It’s just a different kind of ego. Most of the time, all people in bands have a very strong ego, and they have to, otherwise they wouldn’t be able to exist in a group dynamic. There has to be equal ego power, otherwise people get abused in some ways — used and abused.

I think everyone in Garbage meets each other’s egos with respect. Often, we are frustrated with one another, we get tired with one another, and there’s a lot of eye-rolling on occasion. There are times when we haven’t been as kind to one another as we probably wish we had been, but there has never been anything said that nobody can recover from.

People become addicted to the attention and social power that comes with success.
We come to each record with a beginner’s mindset. We don’t identify ourselves by the success that we enjoyed in the ‘90s, and that has freed us to move forward as though it all has never happened in some ways. I think a lot of bands who have success — especially at the level that we’ve enjoyed — they really rely on it and use it as some kind of reassurance. I think what happens is you get stuck by notions of your former self and you can’t move forward freely. You’re tied — you’re chained by it, actually — and I think everyone in Garbage was able to be appreciative of the success but move through it and try and come to every record as though nobody knew who the hell we were.

We’re much more interested in our families liking us as people and spending time with us. Moving through the world with kindness — to me that’s much more important than whether I’ve got a record in the top 20 or not.